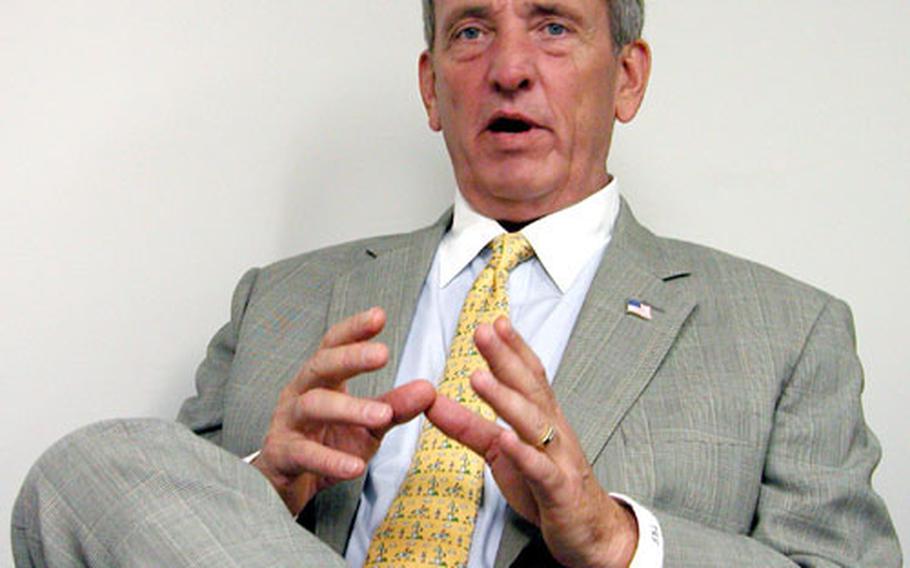 On Sept. 11, 2001, Franks, commander of the U.S. Forces Central Command at MacDill Air Force Base, was en route to Pakistan for a planned meeting with President Pervez Musharraf. The general, his wife, Cathy, and traveling party had landed on the Greek island of Crete to refuel their jet and to grab some sleep at the Kyden Hotel.

His wake-up call at the hotel came an hour earlier than expected, and an aide told him to turn on his television. He watched on CNN International as a terrorist-hijacked airliner slammed into the second tower at the World Trade Center in New York City.

There were two traveling choices for the general: Continue east on his planned itinerary to Pakistan, or reverse course back to MacDill Air Force Base.

Security in Tampa also became one of Franks’ priorities.

“If multiple terrorist cells were operating on this Tuesday, Centcom headquarters and MacDill Air Force Base would be obvious targets,” Franks wrote in his 2004 memoir “A Soldier’s Life.” “I wanted our people and facilities protected.”

He gave the order for the U.S. Special Operations Command — which runs the commando forces of the Army, Navy and Air Force — and the 6th Air Mobility wing at MacDill to operate on “force protection level Delta,” a security level that hadn’t been used at MacDill in a decade.

Essentially, the base went on lockdown, and all non-essential personnel were sent home. The security protocols included extra sea and air patrols around the base and bomb-sniffing dogs at the MacDill entrance, where each vehicle was stopped and inspected.

Though the security level was lessened within a week, the long-term ramifications extended for years. The Air Force, for instance, scrubbed its popular Airfest at MacDill until 2004 because of security concerns.

At the time of the terrorist attacks, the military command at MacDill oversaw operations in 27 countries, from the Horn of Africa, Asia, the northern Red Sea regions and the Arabian Peninsula. It gained international acclaim under Gen. Norman Schwarzkopf during Operations Desert Storm and Desert Shield in 1990-91, when a U.S.-led coalition of 35 nations ousted Iraqi troops from Kuwait. President Bill Clinton named Franks head of Central Command on July 6, 2000.

On Sept. 11, Franks headed to the hotel roof, sat in a plastic chair and issued a series of orders over an encrypted satellite link to his staff in Tampa. Begin targeting sites in Afghanistan for strikes. Tell all U.S. Navy ships in the region to cancel all port calls and return to sea. The image of the deadly attack on the USS Cole that killed 17 sailors 11 months earlier was still vivid.

He spoke with Defense Secretary Donald Rumsfeld, who asked his location.

Franks wanted to return to Tampa. There was just one problem: U.S. air space was closed. He considered continuing on to Pakistan for a little arm twisting of Musharraf, but agreed to wait six hours before departing. He decided to head west toward MacDill even though the jet’s flight crew didn’t have permission to enter U.S. airspace.

Franks, in his autobiography, said he was confident the authorization would come. It did, and he arrived at MacDill at 3 p.m. on Wednesday, Sept. 12, for what he described as a 10-day period of caffeine-fueled intense focus for him and his staff to plan the military response that became known as Operation Enduring Freedom.

But there was more than war gaming going on in Tampa.

On Sept. 20, MacDill’s 6th Air Mobility Wing received orders to be prepared for deployment to support U.S. military action in the Middle East. It’s the same day Pennsylvania Gov. Tom Ridge was appointed as head of the newly created Office of Homeland Security.

And four days after that, MacDill allowed reporters on the base for the first time since Sept. 11 to meet members of the 6th Air Mobility Wing’s refueling unit. After the terrorist attacks, MacDill’s refueling personnel assisted the nation’s homeland defense operations, providing fuel for fighter jets patrolling U.S. skies.

Reporters learned the boom operators, pilots and co-pilots slept in fire-retardant flight suits, ready to hop in their refueling tankers within minutes when ordered. “Chained to the plane,” one officer joked, since flight crews were not allowed to be more than a few hundred yards from their tankers.

The planes, holding 30,000 gallons of fuel when fully loaded, could fly for more than 20 hours. Their job was to meet a fighter jet somewhere over American airspace. Then, a boom operator would lie on their stomach, drop the boom and steer it into the other craft’s receptacle for refueling. Today, that unit encompasses 24 KC-135 air tankers and 3,000 professional airmen, according to the MacDill Air Force Base web site.

Eventually, the military planning turned to military action. On Oct. 7, President George W. Bush announced that airstrikes targeting Al-Qaeda and the Taliban had begun in Afghanistan.

A month later, Franks found himself on defense as he made his debut at a Pentagon press briefing amid criticism the U.S. response had been too mild.

“What we have said is that we like the progress we have had up to this point,” he said. “It is only those who believe that all of this should be done in two weeks’ time or in one month or perhaps in two months who are disappointed by this.”

The Nov. 27 press briefing moved to Tampa’s Marriott Waterside Hotel to make it more convenient for Franks to speak to reporters.

Rumsfeld and Franks told reporters then the United States was evaluating a series of sites in Afghanistan to check for weapons of mass destruction, that U.S. intelligence had narrowed the location of the Taliban and al-Qaida leadership, and that with the war moving from cities to caves, the fight would be getting even more dangerous.

The general, meanwhile, knew he had the home field advantage.

“How about those Buccaneers?” he asked at the outset of his remarks, two days after the Bucs had defeated the St. Louis Rams on Monday Night Football.

At the Bucs’ next home game, Franks threw a few footballs on the sideline ahead of the coin toss and addressed the team in the locker room after the game, a 15-12 come-from-behind victory over the winless Detroit Lions.

Editor’s note: The recollections attributed to Gen. Tommy A. Franks come from: His 2004 autobiography “A Soldier’s Life;” an Oct. 22, 2014, interview for the University of Virginia Miller Center’s presidential oral history for President George W. Bush, and remarks Franks made on Sept. 11, 2016, on the opening of a 9/11 exhibit within the Gen. Tommy Franks Leadership Institute and Museum in Hobart, Okla. Information from Times files also was used in this report.