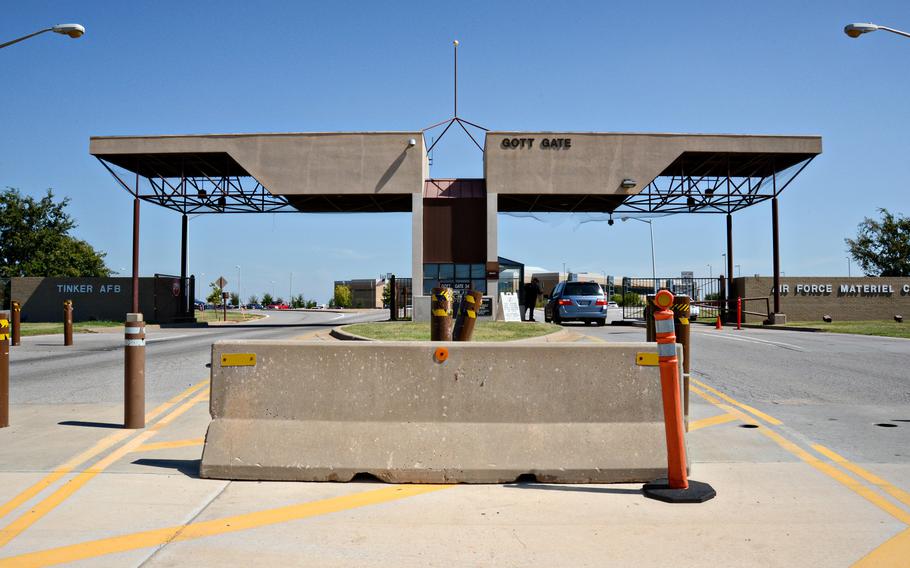 After a welcome from Capt. Steven Luna, the ceremony was largely guided by presiding officer Gen. Arnold "Arnie" Bunch Jr., who oversaw the passing of the flag from Kirkland to Miller and introduced the two men before their speeches.

"Today, we send off one of the Air Force's most distinguished leaders and usher in another rock star," Bunch said.

Nearly 200 people watched as authority was formally transferred from Kirkland to Miller, and the two officers spoke of their mutual respect.

"Gen. Kirkland has got incredible experience, not only in sustainment, in the nuclear enterprise and in headquarters roles he's had, but I think his collaborative approach is the model," Miller said. "He calls people to work out issues that wouldn't necessarily have the ability to say no, but he still finds value in throwing a broader net to get bigger insights for a better solution to a tough problem."

The Air Force Sustainment Center, headquartered at Tinker, consists of about 40,000 military and civilian personnel. Its purpose is to provide logistics, supply chain management, health support and military readiness for the Department of Defense aircraft and services.

Prior to his assignment at Tinker, Kirkland was military deputy to the assistant secretary of the Air Force for Acquisition, Technology, and Logistics at the Pentagon in Arlington, Va., from 2017 to 2018. He'd had previous experience as an aircraft and munitions maintenance officer, and served on the logistics staff of U.S. Central Command in the late 1990s.

"It's been my privilege to be only the third commander of the Air Force Sustainment Center," Kirkland said. "I am so proud of my teammates ... who came up with innovative ways to keep our business going when things got tough."

As commander since 2018, Kirkland oversaw an Air Force base that has grown with improvements to housing, food and educational opportunities, while weathering logistical challenges amid international tensions and pandemic-related difficulties.

"Tom Miller is the absolutely most qualified person today to lead the Sustainment Center into its 10th year," Kirkland said.

Kirkland, who is retiring, said he plans to stay in Oklahoma to be near family and friends.