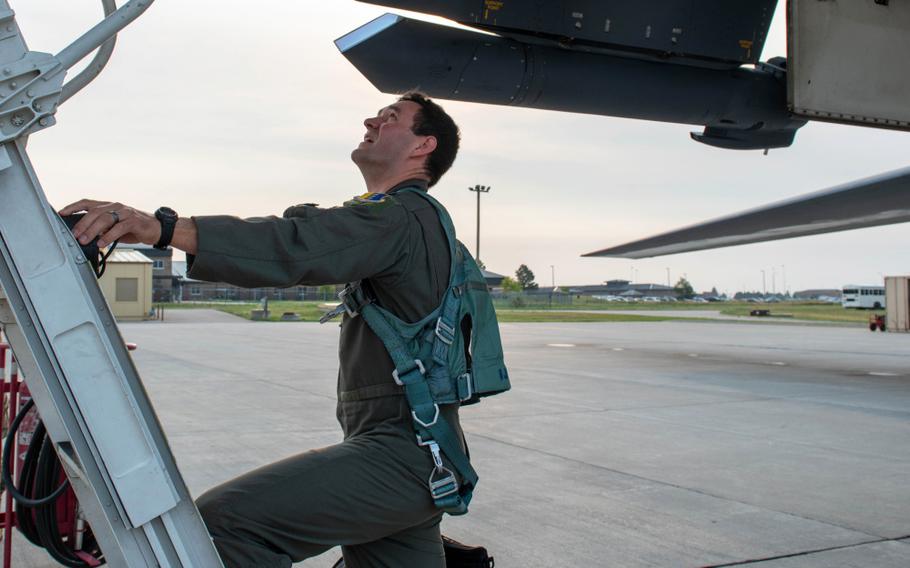 (Tribune News Service) — Capt. Matt Cale watched F-16 flyovers growing up in Arizona, which changed his dream of wanting to be a race car driver to being a pilot.

In January 2019, he was assigned to Ellsworth Air Force Base as a B-1B Lancer pilot, his top choice for planes.

"I get giddy a lot of times when I get to go fly," Cale said Tuesday at Combat Raider Media Day. "Usually right when you take off and the wheels are starting to come up."

Cale is with the 34th Bomb Squadron that is participated in the Combat Raider exercise that was conducted on the Powder River Training Complex, the largest military air space in the continental United States. The annual training focuses on large scale exercises to train air crews on combat capabilities and lasts from July 19-23.

B-52 Stratofortress, F-15E Strike Eagle, F-16 Fighting Eagle, F-35 Lightning II, E-3 Sentry, E-8 Joint Stars, RC-135 Rivet Joint, KC-135 Stratotankers and KC-46 Pegasus aircraft also are participating in the exercise. Only a handful will take off from Ellsworth Air Force Base. Others will launch from their home stations and integrate with other aircraft during the training.

Lt. Col. Tina Ellis, commander of the 28th Operations Support Squadron, said the training is a balance between quality and quantity for the aircrews. She said the air space at Powder River allows crews to ample room to train. 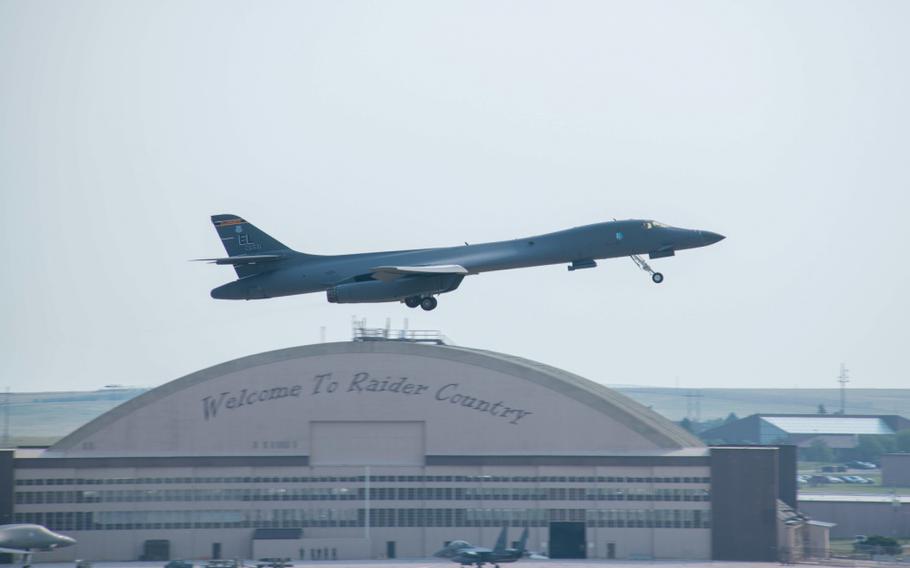 A 34th Bomb Squadron B-1B Lancer gains altitude at Ellsworth Air Force Base, S.D., July 20, 2021. The B-1 was one of the first aircraft to take off as part of exercise Combat Raider 21, which is designed to train aircrew in a wide range of operations against modern threats. (Quentin K. Marx/U.S. Air Force)

Capt. Taylor Hiester, 114th Operations Group F-16 pilot with the South Dakota Air National Guard, said the exercise brings multiple weapons systems and puts them in the same piece of sky, which is a logistical challenge.

"One of the reasons the American military is the best fighting force in the world is there's a lot of different people who've never met each other prior to the mission planning or never seen each other until they're in the air," he said. "They fly within 1,000 feet of one another and still execute the mission flawlessly without any losses."

Hiester said it takes thousands of people to get one airplane in the air. It involves support from aircraft maintainers, airfield management, munitions and others. He said there's a lot of trust involved.

"The crew's trusting us with their life when they get in the air, so I know I can trust that guy to do the inspection upstairs while I'm doing downstairs," Alevras said.

Conventional munitions Staff Sgt. Taylor Holt said there's communication with munitions as well to make sure all of the assets are in the right buildings. He said his crew builds and does system checks to make sure ammo gets to the aircraft on time.

Hiester said the Air National Guard will specifically focus on what it takes to bring a small number of airplanes into operation with the minimum amount of equipment and personnel.

"There's a lot of ways and kinks to work out in the plan," Hiester said. "This is the way of the future, the way we're looking to deploy in the future. ... We're looking to find our weaknesses there and exploit them and fix them."

Hiester said it was his childhood dream to fly F-16s and loves that it has one seat.

"I can never repay the country or the South Dakota Guard for the opportunities I've been given," he said.