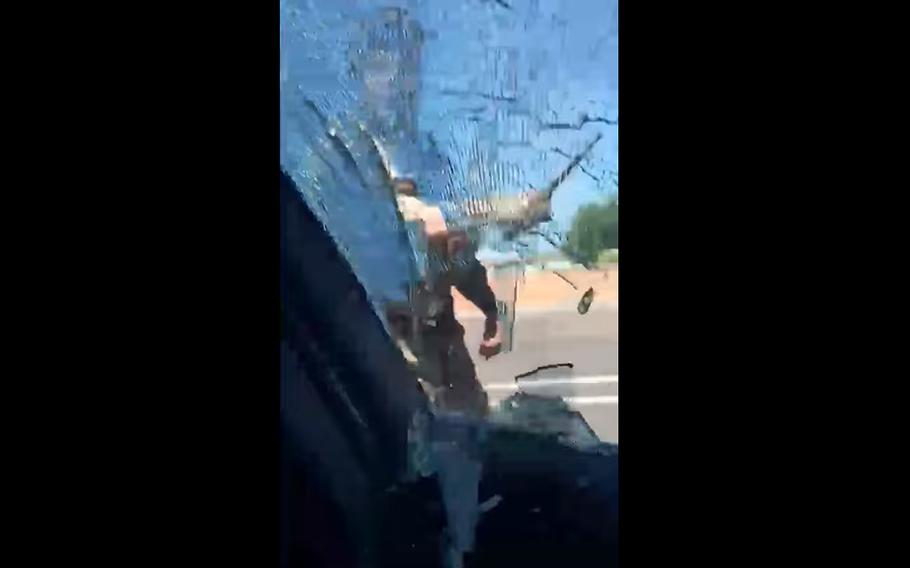 In this screenshot from a Facebook video, a window in Tati Gonzalez's car shatters as a security forces airman at Mountain Home Air Force Base, Idaho, hits it with his baton. (Facebook)

A child inside a car screams as a U.S. airman outside orders the driver out, then smashes the window in a minute-long video that caused a controversy on social media and led to an Air Force review.

The footage from the gate of Mountain Home Air Force Base in Idaho had been viewed over 12 million times by Wednesday, after the driver’s sister shared a version of it on the social media app TikTok June 29.

The post, in which Deja Gonzalez says the airman acted illegally and says her sister Tati’s two young children were taken away from her, has been "liked" over 2 million times.

In a Facebook post, Tati Gonzalez claimed she had been mistreated by military and local police officials. But the base and the county sheriff say authorities acted appropriately. 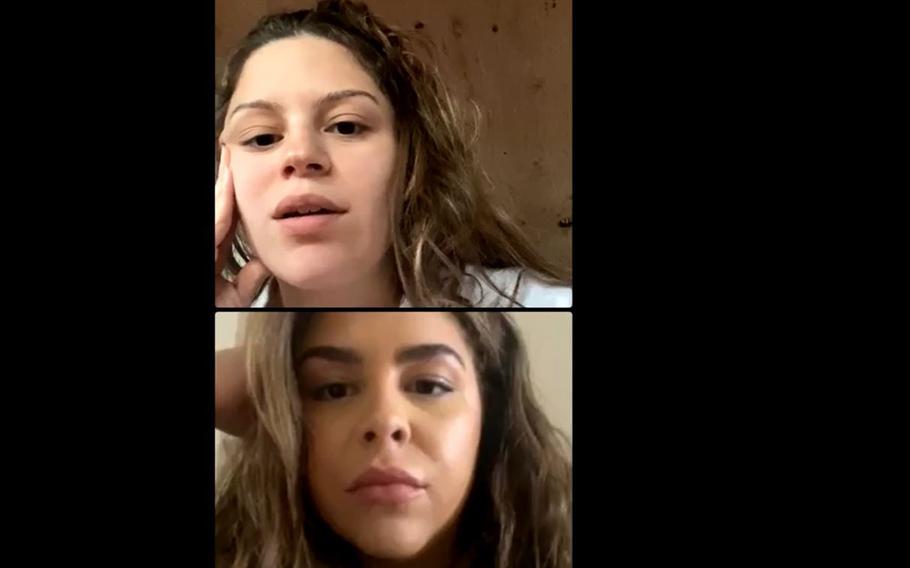 Tatiyana Tati Gonzalez, top, and her sister Deja Gonzalez chat June 30, 2021, during a Facebook livestream about an incident at Mountain Home Air Force Base in Idaho, in which Tati Gonzalez captured video of a security forces airman smashing in her car window and arresting her. A version of the footage Deja Gonzalez shared on the social media app TikTok garnered over 12 million views and 2 million likes. (Facebook/Tati Gonzalez)

The incident began June 26 when Gonzalez was denied entry to the base after arriving with an invalid military dependent ID, invalid driver’s license and invalid vehicle registration, an Air Force official said Tuesday in response to a Stars and Stripes inquiry.

It escalated when she tried to flee, driving her vehicle at a security forces airman who had to move out of the way before executing a high-risk traffic stop “due to the perceived risk of serious bodily harm or injury,” said Master Sgt. Eric Harris, a spokesman for the base's 366th Fighter Wing. That is about where the video begins.

“You just committed a felony,” Green says, reaching into the car to unlock the door. “Get out of the vehicle.”

“For what?” Gonzalez responds. “You’re not the police.”

Green tells her he is law enforcement and says he’d already advised her she was being detained, but Gonzalez responds that he called it “a civil matter.” She appears to resist and tells him not to touch her, while he explains that he’s charging her with evading police. He eventually puts her in handcuffs, despite her protests.

The incident did not meet the threshold for a use of force review, but one was conducted at the security force commander's request, “out of an abundance of caution,” Harris said.

Such reviews are conducted by senior noncommissioned officers and may use any audio, video and written records, he said. The NCO in Green’s case found that he had responded appropriately, Harris said.

Parts of the official account Harris provided conflict with elements of Tati Gonzalez’s version, shared in a 40-minute Facebook livestream with her sister June 30. She says she had come to get her belongings from her former spouse, who is stationed there, and had been told to bring her expired ID.

She was told she'd get help from base officials once she had a divorce decree signed by a judge, she said, but when she arrived she was initially referred to the visitor’s center. She then asked to pull into a parking space near the gate while the guard called for a supervisor, she said. This part of her story is largely consistent with what Harris told Stars and Stripes.

Green soon arrived and asked for her vehicle information, which she told him was among her belongings with her former spouse, she says. Then she says Green began “being weird” while questioning her and called her a liar, which made her feel uncomfortable, so she asked to be escorted off base.

Harris said Green had been trying to deescalate the situation.

Gonzalez recounts questioning Green’s authority to “stop a civilian for a civilian matter” before eventually deciding to drive off base. But the gate was up, “so I stopped and I was just sitting there” until Green came up to the door with “that weapon that he had.” She started filming thinking he was going to hurt her, she said.

After being arrested, she was booked into the Elmore County Jail, where she says she was held illegally until June 28, when she was released after the charges “didn’t stick.”

The jail has an agreement with the air base to detain suspects arrested on federal property, Elmore County Sheriff Mike Hollinshead said in a phone call Tuesday.

She was held on a $600 bond over the weekend. When the jail staff called to get a date for her arraignment in federal court the next Monday, they were told to release her “on her own recognizance.”

Federal charges she faces for the registration violation, eluding a police officer and putting her children at risk have yet to be resolved, Harris said.

Gonzalez said she had no transportation when she was released, and that she passed out while walking to a nearby motel. But her debit card had been taken when she was arrested, so she couldn’t get into the room.

“Since the incident, Ms. Gonzales has had several possessions returned to her,” Harris said. “Mountain Home Air Force base supports our Air Force members and dependents in accordance with Air Force policy.”