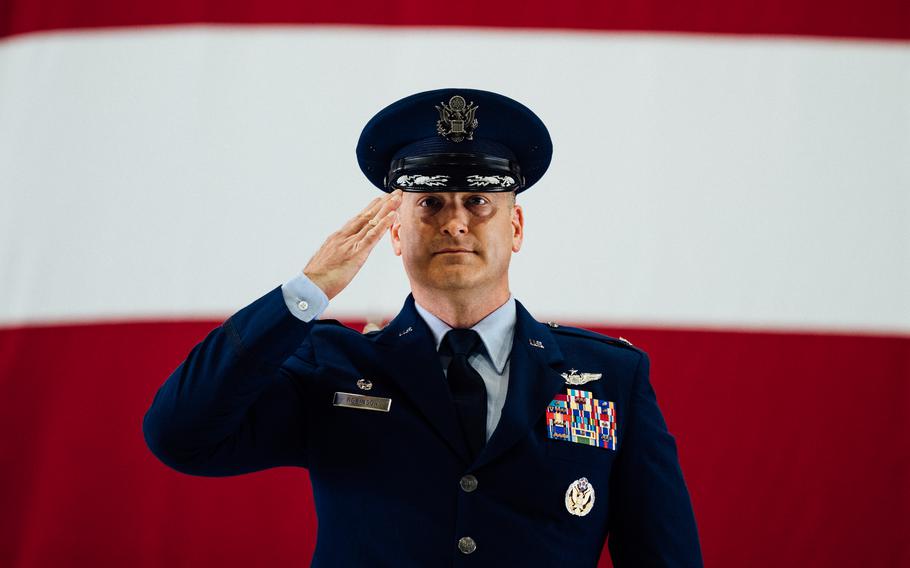 He previously served in four different posts on Scott since 2014, and now embarks on his biggest role yet — Commander of the 375th Air Mobility Wing.

Robinson assumed command of the 375th AMW from Col. Scot Heathman during a change of command ceremony Thursday. Heathman had served as commander since 2019.

Robinson returns to SAFB from Joint Base Charleston, S.C., where he served as vice commander of the 437th Airlift Wing from July 2019 to June 2021.

Previously, he held the following posts on SAFB:

As the 375th AW commander — often referred to as “the mayor of Scott Air Force Base” — Robinson will oversee more than 13,000 service members and civilians and work directly with the local community and civic leaders.

“To our community leaders, I’ve lived a lot of places, and you’d never know it from my accent, but this is where we call home,” Robinson said. “This local community is the most supportive I’ve seen anywhere. This base is very fortunate to have such close ties to such an amazing community.”

“What a wonderful day to celebrate this wing and two tremendous leaders,” Bibb said. “Scott, you have a lot to be proud of. Thank you for your leadership. Chris, it’s your turn to take this team to new heights. You’re the the right leader at the right time. And, Scott, you have this wing set up for future success.

“Scott and Chris, I know how proud your parents must be of you.”

Heathman, meanwhile, won’t travel far for his new post. He will serve under Bibb as vice commander of the 18th Air Force, also on Scott AFB.

“I truly look forward to serving with you and the entire 18th Air Force wing,” Heathman said to Bibb.

Heathman will miss commanding the 375th AMW, but is excited for Robinson.

“I stand here today in awe of you,” Heathman said of the 375th AMW. “You’ve made me so proud to come to work each day and fight for you and your families. Thank you Showcase Airmen, I will always be in your corner. Chris, I am so excited for you. I’m in your corner, my friend, cheering you on.”

“Scott, I know this is a bittersweet day for you,” Robinson said. “Anybody who gets to talk to you for just a few minutes knows how much you care about our Airmen. This wing is set up for success for years to come because of Scot Heathman. And I’m very very lucky to be following such a great leader.”

In summation, Robinson concluded, “You are the Showcase Wing for a reason. I’m proud to serve you.”