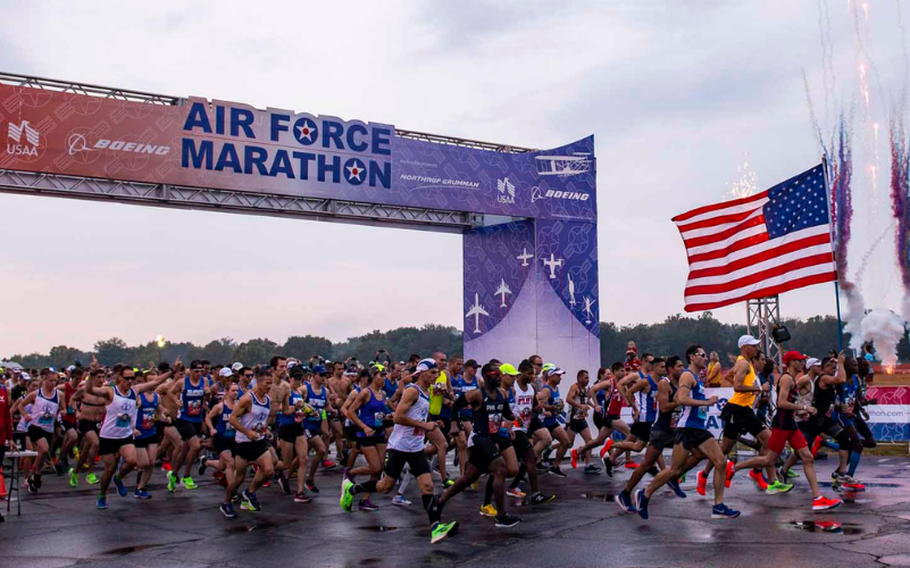 The Air Force Marathon is back for on-location racing in what will be its 25th anniversary on Sept. 18 this year. (Facebook )

WRIGHT-PATTERSON AIR FORCE BASE, Ohio (Tribune News Service) — Distance runners, take heed: The Air Force Marathon is back for on-location racing in what will be its 25th anniversary on Sept. 18 this year.

This year’s event celebrates the breadth of Air Force power, highlighting a quartet of famous airplanes. Races include the familiar array of distances: The 26.2-mile marathon, 13.1-mile half marathon, 10K, 5K, Tailwind Trot 1K Kids’ Run, and the “Fly! Fight! Win! Challenge” events — two days, three races, and four medals, if you think you’re up to it.

The marathon three-person relay is also returning this year after a long hiatus.

“I loved the marathon before I was paid to tell people I loved it,” Brandon Hough said in an interview Friday, recalling that he ran the full marathon three times and the 5K once before he became director.

“What a privilege to come to work for something I completely love,” he said.

Hough said is gratified by the registration numbers he sees so far. Registration is perhaps 10% below where it stood at a similar point in 2019, but that’s not bad news, he says. That’s probably ahead of where similar races are at this point, he said. And he expects registration to speed up as the events approach.

“We’re going to put on a great race for those who do come,” Hough said.

The marathon embraced virtual race options before the COVID-19 pandemic. There remains a contingent of runners who want to race, but for a variety of reasons can’t make it to the starting line at the National Museum of the U.S. Air Force.

“We are bigger now than just the third weekend in September,” Hough said.

Meanwhile the History & Heritage Race Series, which has always been virtual, remains on offer.

That series lets participants run where they are and continues to highlight retired aircraft. Six airplanes are featured in 2021 with each aircraft revealed every two months.

“It just shows you that people want to be associated with the U.S. Air Force Marathon,” Hough said.

It’s not too late to register for on-location and virtual events; go to https://www.usafmarathon.com/.

Four distinctive airplanes being celebrated in this year’s race: The B-2 Spirit, F-35 Lighting II, A-10 Thunderbird II and the mighty C-17 Globemaster III.

The race continues to concern itself with nailing down “the fundamentals,” Hough said. The events need about 2,500 volunteers, and those will be welcomed until about the first week of September.