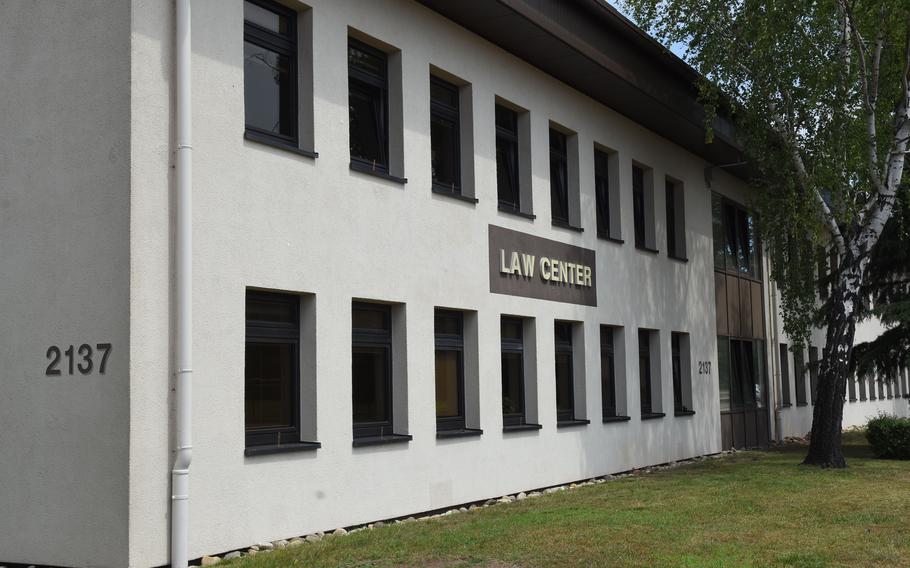 Buy Photo
The law center at Ramstein Air Base, Germany, where Domingo J. Cabuhat Jr., was sentenced to 30 years in prison June 16, 2021, for sexually abusing a child, wrongfully photographing the child, and viewing and possessing child pornography, among other crimes. (Jennifer H. Svan/Stars and Stripes)

RAMSTEIN AIR BASE, Germany — An Air Force staff sergeant was sentenced to 30 years in prison for crimes including sexually abusing a child, wrongfully photographing the child, and viewing and possessing child pornography.

Domingo J. Cabuhat, Jr., assigned to the 86th Aircraft Maintenance Squadron, also received a dishonorable discharge and was reduced in rank to E-1, military judge Lt. Col. Will Babor said as he handed down the punishment Wednesday at the close of a three-day general court martial. He will have to register as a sex offender when he is released from prison.

Cabuhat, who joined the Air Force in 2011, molested the victim for several years, starting when she was seven or eight, at Dyess Air Force Base in Texas and at Ramstein. On numerous occasions, he touched the victim, over and under her clothing, on her breasts, buttocks, genital area and thighs, with his hands and genitalia, according to court testimony and the charges.

The abuse grew “more and more intrusive, physically and psychologically” and continued until the victim was old enough to know it was wrong, Air Force Capt. Julia Ziegler said in opening arguments for the government.

The victim, now 14, said in an impact statement read to the judge on her behalf, that she is unable to sleep alone or with the lights off, and has nightmares about the abuse.

“I can’t even look at my body in the same way, the same body he touched,” she said in the statement. She also testified in court and asked the judge to find Cabuhat guilty so that she could “finally feel relief.”

“The Air Force is committed to the pursuit of justice and has no tolerance for this type of behavior,” 86th Airlift Wing officials said in a statement after the trial.

The abuse stopped only when the victim broke down and confided in some friends during lunch, shortly after starting seventh grade in 2019, according to court testimony. One of the friends took her to a guidance counselor, where she submitted a written statement, the court was told.

When Cabuhat learned he might be under investigation, he deleted incriminating digital files from several devices. Investigators were able to recover many of the images, including photos Cabuhat took of the victim without her consent, sometimes while she was sleeping, in various stages of undress.

Cabuhat said he had child pornography on a cell phone “for mobile use” to gratify himself.

The victim’s mother, who was also in court, cried as she identified her daughter in the photos. She said she had no idea the abuse was occurring.

Cabuhat will initially be confined at the Army corrections facility on Sembach but will serve most of his sentence at a military prison in the U.S., Air Force officials said.

His family will receive part of his pay and benefits while he’s confined, though it’s not certain for how long, officials said.