Airman 1st Class Josh Hegemann, an F-16 crew chief, installs an engine on the 162nd Fighter Wing flightline wearing newly issued coveralls in 2009. Airmen working in maintenance and other labor-intensive jobs will soon be able to wear a grey-green, service-issued coverall on the job, the Air Force has said. (Gabe Johnson/Air National Guard)

RAF LAKENHEATH, England — Airmen working in maintenance and other labor-intensive jobs will soon be able to wear grey-green, service-issued coveralls on the job, the Air Force said this week.

The new maintenance duty uniform is expected to be available by August, the Air Force said in a statement published Monday.

It’s hoped it will “instill a sense of culture and inclusivity for our maintainers who work to keep the mission going 24/7,” Chief Master Sergeant of the Air Force JoAnne S. Bass said.

Christian Santiago, a maintainer with the 493rd Aircraft Maintenance Unit out of RAF Lakenheath, said the new uniform is “going to make life a lot easier for us maintenance folk who wear coveralls the majority of the time.”

“We won’t have to change our uniform two, three, four times a day and we can just focus on what we are doing,” he said.

Airmen can wear the new uniform item between their home and work and at all installation locations, but not in an office or non-industrial setting, the statement said.

Local coverall variants will continue to be allowed, but only in the workplace and on the flight line.

Tactical caps with an operational camouflage pattern, or OCP, can be worn starting immediately, although the Army & Air Force Exchange Service does not yet have them in stock, the statement said. 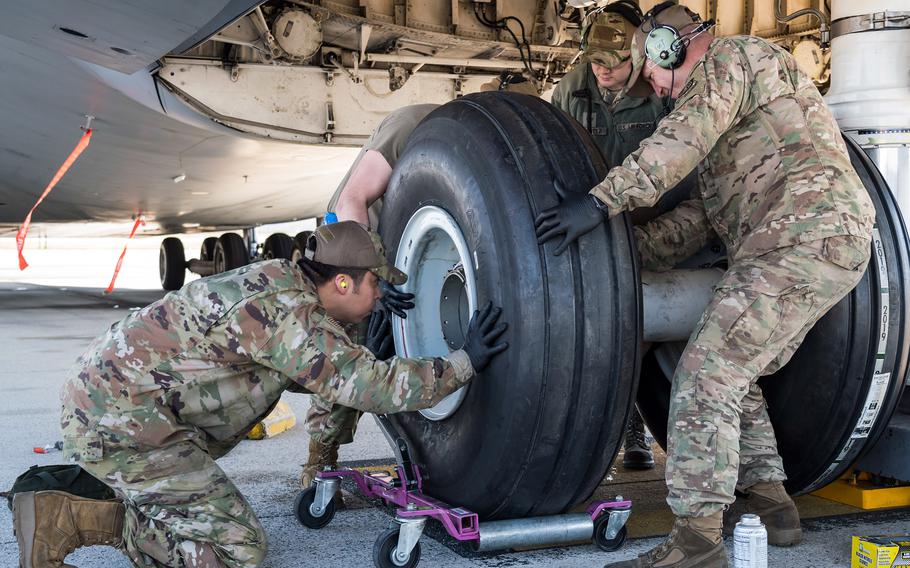 Women are authorized to pull their bun or ponytail through the back of the cap.

Once the acquisition process for the camouflage caps has been completed, all other caps will be unauthorized, the statement said.

The coveralls will be worn with a coyote brown T-shirt, green or brown socks and boots, and a camouflage patrol or tactical cap, the statement said. They will have a name tape, service tapes and rank along with the higher headquarters patch on the left sleeve and a subdued U.S. flag and organization patch on the right sleeve.

The Air Force changed over to the Army’s uniform pattern starting in 2018, replacing its gray, blue and green tiger stripe uniforms. The new OCP became mandatory for all airmen as a utility uniform starting April 1.