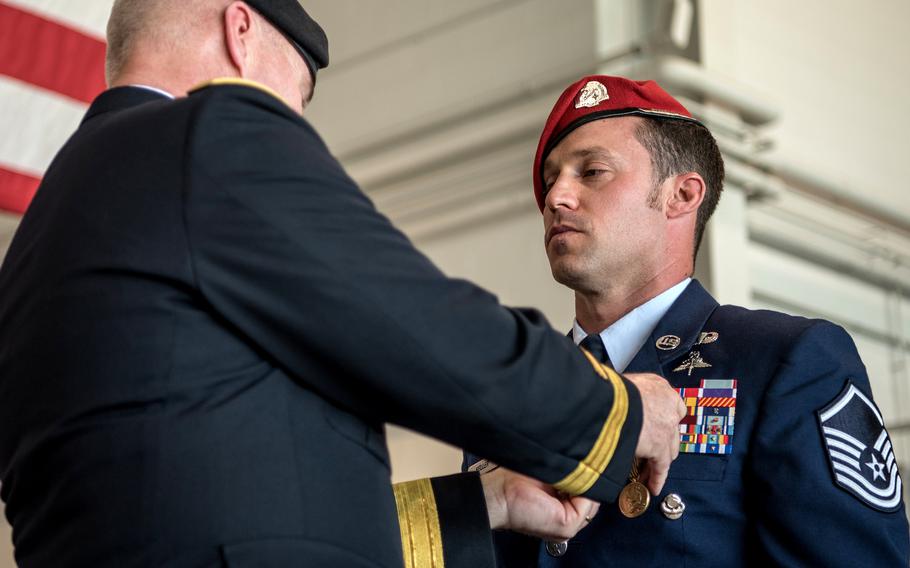 Brig. Gen. Hal Lamberton, left, the adjutant general for the Commonwealth of Kentucky, pins the Airman’s Medal to the uniform of Master Sgt. Daniel Keller, a combat controller in the 123rd Special Tactics Squadron, during a ceremony at the Kentucky Air National Guard Base in Louisville, Ky., June 12, 2021. (Joshua Horton/U.S. Air National Guard)

The airman earned the highest Air Force award for noncombat bravery for rescuing a motorist from a burning SUV in Kentucky, a little over a year after earning the service’s second-highest award for heroism on the battlefield in Afghanistan.

The combat controller with the 123rd Special Tactics Squadron received the Airman’s Medal during a ceremony Saturday at the Kentucky Air National Guard Base in Louisville, the 123rd Airlift Wing said in a statement.

Keller was driving home from work Nov. 16, 2018 when he came up on the aftermath of a crash on a narrow bridge outside Louisville and jumped out of his truck to help. After assisting a man and his son from one vehicle, he enlisted bystanders to stop traffic so he could rescue the unconscious driver of the SUV. “With complete disregard for his own safety, he broke the rear window and entered the burning vehicle,” the award citation says.

In 2017, Keller’s courage in a grueling battle with Islamic State militants in Afghanistan earned him the Air Force Cross — which he received about a year after the crash. Despite suffering a traumatic brain injury from a nearby blast, he'd directed critical airstrikes that killed dozens of enemy fighters, then risked his life to help evacuate wounded troops.

During the incident in Louisville, smoke inside the vehicle forced him to hold his breath, and when he reached the driver, he found the man’s foot was trapped and he couldn’t be pulled out away from the burning engine compartment.

“I couldn’t get him that way — and the smoke was really filling up the car, so I knew we had to try and get him out through the side or another way," Keller said in the wing statement.

With the help of an unnamed woman, he squeezed between the burning SUV and the bridge railing to pull the driver out a side window and move him away from the burning wreck. He had to go back to help the woman, who had gotten trapped alongside the burning vehicle, and then they began performing CPR. That's when Keller heard the familiar pop of gunfire.

Realizing ammunition inside the burning SUV was cooking off, he moved everyone back behind cover and continued providing medical care until emergency crews arrived.

While “by no means a medical expert,” he’d learned enough in the military to “buy time,” Keller said.

At last week’s ceremony, attended by about 100 of Keller’s family, friends and colleagues, Kentucky's adjutant general Brig. Gen. Hal Lamberton praised him for his quick thinking and heroic selflessness off the battlefield.

“A lot of folks, when they’re confronted with a rapid change to their environment like that, have a tendency to want to get away from it,” Lamberton said. “But Dan’s character and training is what enabled him to not only recognize what the situation is, but take the appropriate action to address it.”