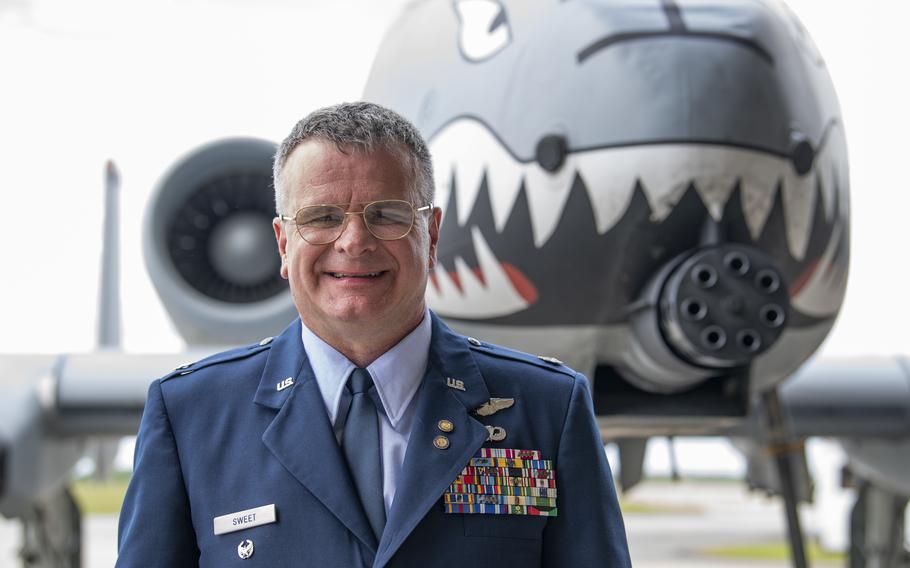 Retired U.S. Air Force Lt. Col. Rob Sweet poses for a photo after his retirement ceremony Jun 6 at Moody Air Force Base, Georgia. During Operation Desert Storm, Sweet’s aircraft was shot down and he was held as a prisoner of war for 19 days. (Andrea Jenkins/U.S. Air Force)

As Lt. Col. Rob Sweet, the last serving Air Force prisoner of war, approached retirement on June 6, 2021, he recalled the moment during Operation Desert Storm when his A-10 Thunderbolt II aircraft was shot down by enemy forces southwest of Basra, Iraq.

On his 30th mission in Desert Storm, Sweet and his flight lead, Capt. Stephen R. Phillis, flew a mission to eliminate enemy targets in the area. When they arrived, they were met with heavy fire.

“Our orders at that point were to leave,” said Sweet, who retired as the deputy commander of the 476th Fighter Group at Moody Air Force Base, Georgia. “If the target area is too hot, you have to leave. Don’t get shot down. We’ll come back at night or the next day, it’s not time to be a hero.”

Following the orders, Sweet and Phillis navigated away until they saw something they couldn’t ignore.

“We left and found a pristine array of tanks that had not been hit, which shocked us because by that point everything had been bombed for the past 30 days,” Sweet said. “We started attacking those (tanks) ... I got launched on by a (tank), so we started attacking the site where it came from, and I got hit from behind.”

With severe damage to the aircraft, Sweet lost control of his steering.

“I tried a couple of things, and basically it wasn’t going to work so I punched out,” said Sweet.

After ejecting from the aircraft, Sweet said he was unaware of the traumatic events he was about to face upon landing next to about 15 angry Iraqi soldiers.

He was then captured and spent 19 days as an Iraqi prisoner of war. During that time, he experienced beatings and starvation, fought off diseases and dealt with emotional and mental torment.

Sweet gives most of the credit to his military training for survival.

“The SERE (Survival, Evasion, Resistance and Escape) school that we have is outstanding,” Sweet said. “There were very few surprises in the jailhouse — I knew what to expect.”

Thanks to a prisoner exchange effort, Sweet and many others returned back to America. Unfortunately, everyone didn’t make it back. Phillis, who at the time was flight commander with the 353rd Tactical Fighter Squadron, was killed in action.

“Shortly thereafter, I found out my flight lead was killed,” Sweet said. “I was not without psychological problems. I had survivor’s guilt, and it took me a long time to get over that.”

From those tough experiences, Sweet said he learned how to live again through the importance of taking life as it comes.

With 20 years on active duty and currently retiring as a reservist, Sweet has had a long career. The most fulfilling part was his experience as a squadron commander. Throughout that time, Sweet mentored countless Airmen, especially young fighter pilots, teaching them what it means to be a leader and how to make good decisions under pressure.

“Rob, I want to take this opportunity to recognize your service to our nation and congratulate you on your retirement,” said Gen. Charles Q. Brown, the chief of staff of the Air Force. “You’ve had an outstanding career that I know you, your family, friends and fellow Airmen are proud of. With your retirement it will be the first time in the history of our Air Force that we will not have a former POW serving. In closing, thank you for all you’ve done.”

As he concludes his journey in the armed forces, his advice to anyone in the military is to take every experience day by day.

“Bloom where you’re planted,” Sweet said. “You’re going to have assignments you don’t like, but make the most of them and move on.”