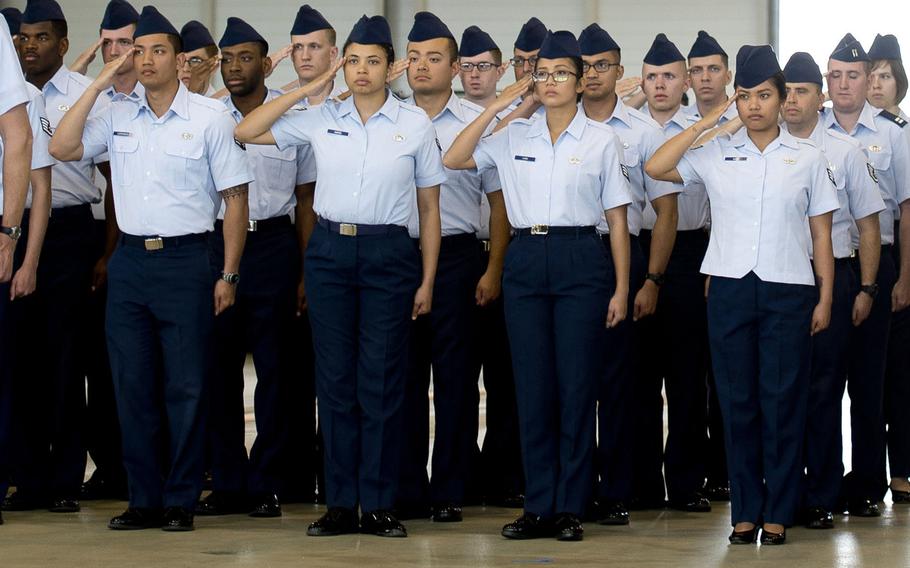 Buy Photo
Airmen salute during a ceremony at Ramstein Air Base, Germany. The Air Force has directed commanders to begin collecting airmen’s ranks, age, gender, race and ethnicity when meting out discipline such as letters of reprimand to determine if discipline is being meted out impartially, it announced in January 2021. (Stars and Stripes)

The Air Force has begun tracking the demographics of some disciplinary actions to determine if punishment is meted out impartially.

Commanders have been told to collect airmen’s rank, age, gender, race and ethnicity in “lesser disciplinary actions,” including administrative counseling, admonishments and reprimands, and submit the data to installation staff judge advocates, the Air Force said in a statement Tuesday.

The move follows an Air Force inspector general report published last month, which found racial disparities in the military justice system for Black service members of the Air Force and Space Force. They were far more likely to be investigated, arrested, face disciplinary actions and be discharged for misconduct, the report said.

All service branches are grappling with bias in the ranks, an issue the Pentagon said it would address after George Floyd’s death in May led to nationwide protests. Floyd, a Black man, died after a white police officer in Minneapolis held a knee to his neck for nearly 9 minutes, leaving Floyd unable to breathe.

By tracking demographic data, commanders will be able to see disciplinary trends in their organizations, Lt. Gen. Jeffrey Rockwell, the judge advocate general for the Department of the Air Force, said in a statement.

Separately, the Air Force has ordered commanders to review official and unofficial unit emblems, morale patches, mottos, nicknames, coins and other forms of unit recognition “to ensure an inclusive and professional environment,” the service said.

Any visual representation, symbols or language that are considered derogatory to any race, gender, sexual orientation, ethnicity, religion, age or disability status must be removed by commanders at the squadron level and above, it said.

The service also said this week that it has directed commanders who get low scores on “command climate” surveys in categories relating to diversity, inclusion, belonging or equal opportunity, to take steps to fix the problems identified in the survey within 60 days of receiving the results.