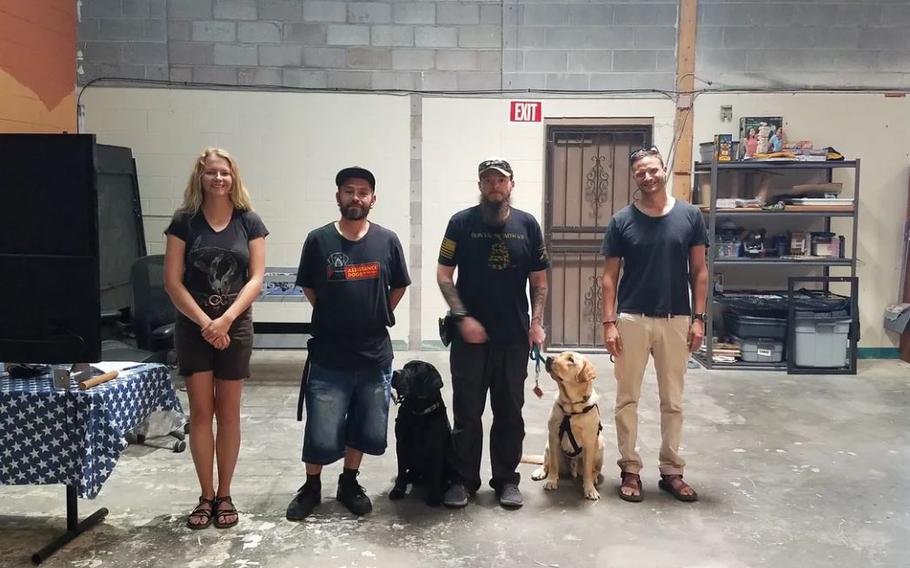 The Warrior Canine Connection is just one of the programs and services made available free-of-charge to veterans and their families by Forward Flag, which is funded by grants and donations. (Forward Flag)

(Tribune News Service) — Navy veteran Beverly Francisco-James is brushing down Dreamer, a 1½-year-old yellow English Labrador, and the dog is looking as if he likes that just fine.

Francisco-James, 58, and Dreamer have just finished a service-dog training session at the Albuquerque facilities of Forward Flag, a nonprofit organization that serves military veterans and their families.

A brain hemorrhage caused Francisco-James to lose sight, hearing and feeling on her left side, but she has been able to get around remarkably well with the help of a service dog.

Dreamer, however, is not her dog. She is training the Lab to aid someone else, perhaps another military veteran. Even so, Francisco-James has benefited from this class as much, maybe even more, than the husky yellow Lab.

“It brushes up my skills,” she said. “It helps me see different dogs’ personalities.”

Marine veteran Robert Candelaria, 59, said the vets receive more from the dogs than they give back.

“Just being with those dogs, you decompress,” he said.

The training program is called the Warrior Canine Connection and is operated by the Santa Fe-based Assistance Dogs of the West in partnership with Forward Flag. ADW brings the dogs from Santa Fe down to the Forward Flag facility at 204 Madeira NE for the weekly sessions.

“Working with the dogs gives veterans a way to give back and feel good about themselves,” said Ari Jontry, ADW instructor, trainer and veterans liaison. “And it’s a great way for veterans with anxiety to focus on something other than their anxiety.”

The Warrior Canine Connection is just one of the programs and services made available free-of-charge to veterans and their families by Forward Flag, which is funded by grants and donations.

There is a small gym for workouts at the organization’s facility. There are art classes, guitar lessons, game nights, a weekly potluck lunch and a rolling mural of an RV used in outreach excursions from Columbus to Raton.

And there are counseling rooms and weekly one-on-one sessions during which veterans can talk to each other about things that are troubling them, things that only another veteran can fully understand.

When it was founded in 2013 by Army veteran Roger Pipkins and Marine veteran John McGill, Forward Flag’s sole mission was to raise awareness of the high suicide rate among veterans and to offer ways to prevent veteran suicides. And even though the organization has evolved into other areas, suicide prevention is still a major focus.

Nationally, an average of 20 veterans commit suicide every day for reasons ranging from PTSD to depression, alcohol and drug abuse and more.

“Most suicide thoughts, bad thoughts, are right there picking at you,” Candelaria said. “What helps is just talking to other vets. Talking to others is part of our healing. We, as veterans, may not be of the same blood, but we are all brothers.”

Army veteran Ted Skibyak, 61, is a volunteer at Forward Flag who teaches suicide prevention classes “to anyone I can get to listen to me.”

He said cost, transportation and stigma are among the biggest obstacles preventing people (veterans and nonveterans) from getting help when they are feeling suicidal.

“But just getting veterans to come in here (Forward Flag) and stop self-isolating is a big step. Because when vets isolate, bad things happen.”

Forward Flag uses and teaches the Question, Persuade, Refer (QPR) suicide prevention curriculum, which helps people recognize the signs of a suicide crisis, question individuals, convince them to seek help and show them where to get it.

“You look for clues to people considering suicide, like giving away prized possessions,” Skibyak said. “Here we have people who can detect clues. Sometimes, (turning things around) is as simple as asking someone ‘What’s going on?’ or ‘How are you doing?’”

“When I got back from Iraq in March 2006, I thought I was fine,” he said. “But my wife kept waking up with bruises because I guess I was flailing around in bed at night. My wife said I knew more Arabic when I was talking in my sleep than I did when I was awake.

“I was involved in several blasts in Iraq, but I don’t know if my PTSD comes from Iraq. It could have come from my police work, or from seeing little children I could not save when I was a paramedic.”

Unlike some veterans, Skibyak was not afraid to seek help, and he got through that rough patch with some VA counseling.

But in November 2015, when he was employed as police officer at Jemez Pueblo, a pickup truck slammed into Skibyak as he was riding a Yamaha motorcycle to a National Guard training session.

His injuries were horrific — bleeding in the brain, ribs broken in multiple places, blood clots in his lungs and right leg, the loss of seven inches of small intestines. The nerves of his right arm were torn out of his spinal cord.

“I have some movement and feeling in that arm, but it is mostly dead,” he said.

Perhaps the worst damage he sustained was depression.

“The Army was retiring me,” he said. “I was losing contact with my troops. I was losing my job with Jemez Pueblo. I was thinking I was useless. I couldn’t do anything. I was lost.”

But that’s when he found Forward Flag.

In 2016, Skibyak, who had just been allowed to start driving again, pulled into the parking lot of an Albuquerque hotel so he could take a phone call. Before leaving, he saw a Forward Flag travel trailer, the predecessor of the RV the organization uses for outreach efforts today. He checked it out and met Forward Flag founder Roger Pipkins.

“Roger gave me a new mission,” Skibyak said. “He said, ‘Go home and take this online course and come back tomorrow and help me sign people up for a suicide-prevention class.’ I kind of found out I needed a mission to keep going. Now, veterans are my troops.”

Lisa Veres, 57, who served as a Navy nurse, is there with her black Lab, Hedy, named for Hedy Lamarr, the glamorous Hollywood actress of the ‘30s, ‘40s and ‘50s and also an inventor of some note.

Veres, who uses a walker because of spinal cord damage, got Hedy through Assistance Dogs of the West and also discovered Forward Flag because of her association with AWD.

“She will pick up a credit card for me, a dime,” Veres said of Hedy. “If my walker rolls away, she’ll go get it for me.”

Veres, who has worked as a chaplain, believes in Forward Flag and its mission.

“I think what they do is awesome,” she said. “I love the camaraderie of being around other veterans. And it’s good for my dog to be around other dogs.”

Skibyak brags some on Hawkeye, who is named for the Alan Alda character in “M*A*S*H,” the 1970s and ‘80s TV series

“He can open and close doors for me,” Skibyak said. “When my CPAP comes off at night, he will wake me up. But the best thing he does, is be there.”