Rome: A two-day tour of the Eternal City 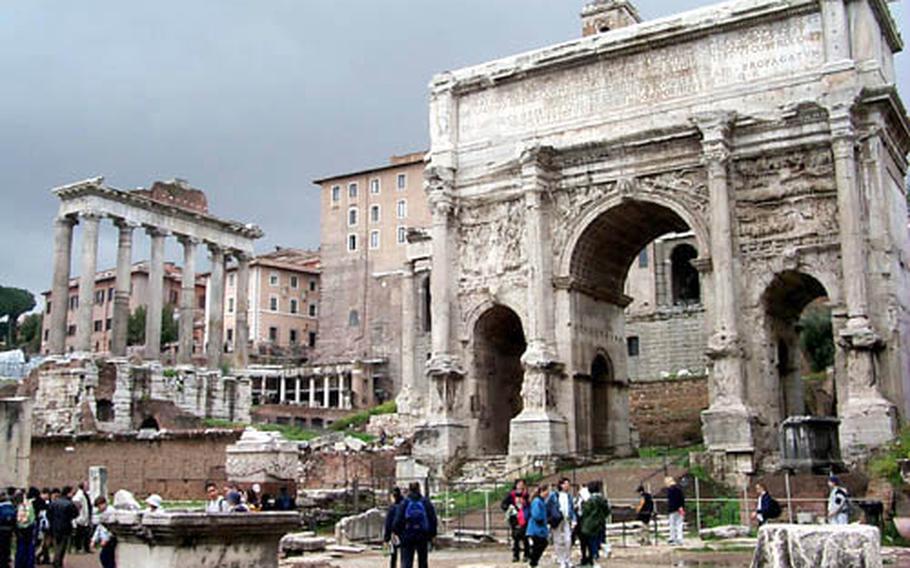 What&#39;s left of the Forum teeters before a group of tourists on a Sunday morning. (Ward Sanderson / S&S)

What&#39;s left of the Forum teeters before a group of tourists on a Sunday morning. (Ward Sanderson / S&S) 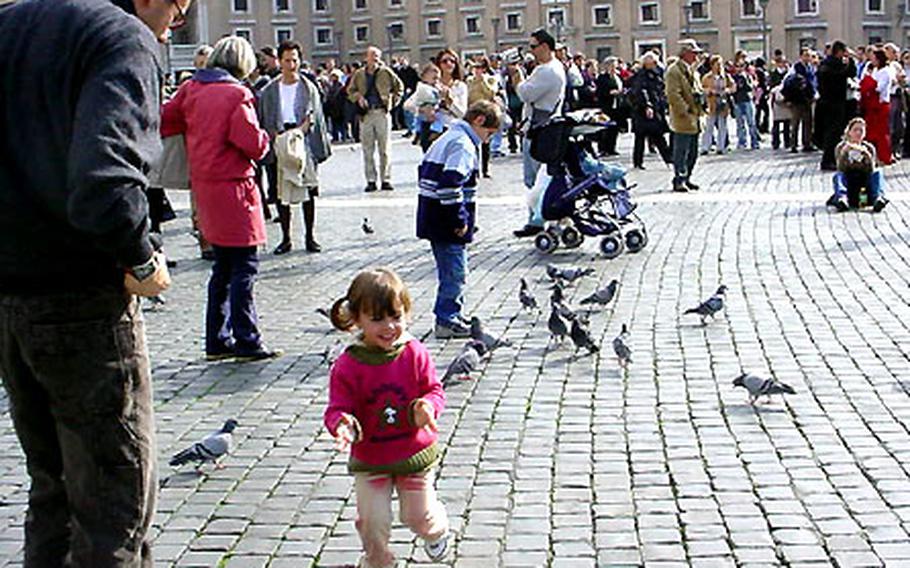 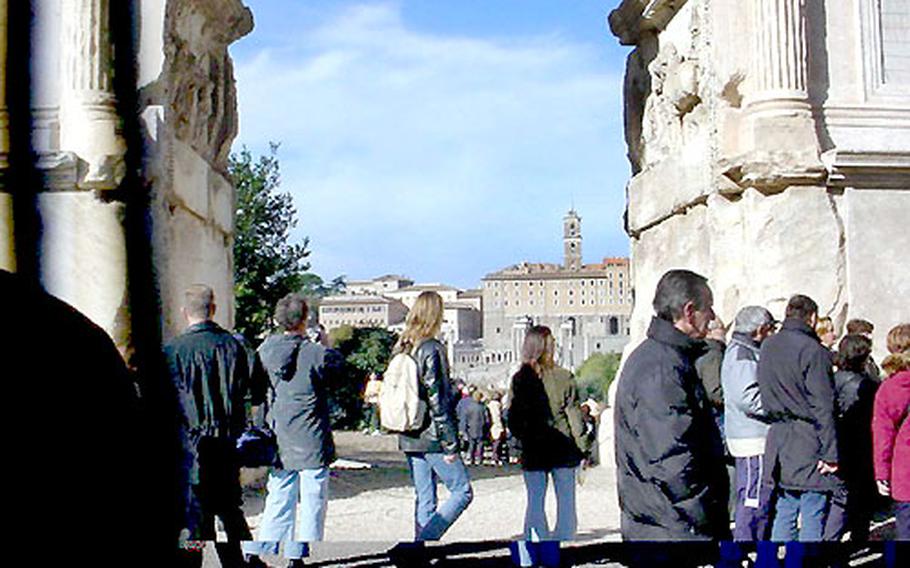 Tourists make their way along-side the Arch of Titus in the Roman Forum. In the distance is Michelangelo’s Piazza del Campanology. (Roxanne Cooper / S&S) 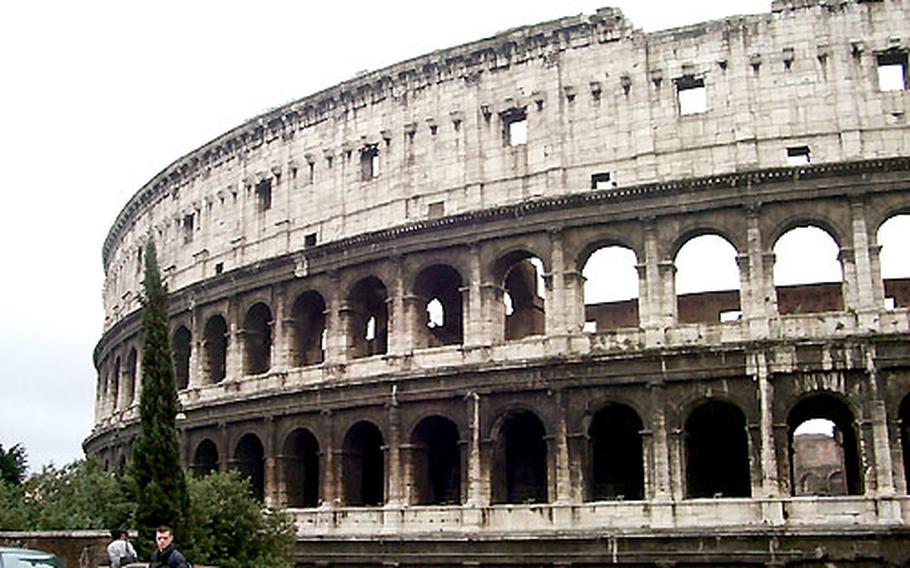 The Roman Colosseum curves broadly in Rome, not far from the ancient Forum and a modern-day subway stop. (Ward Sanderson / S&S) 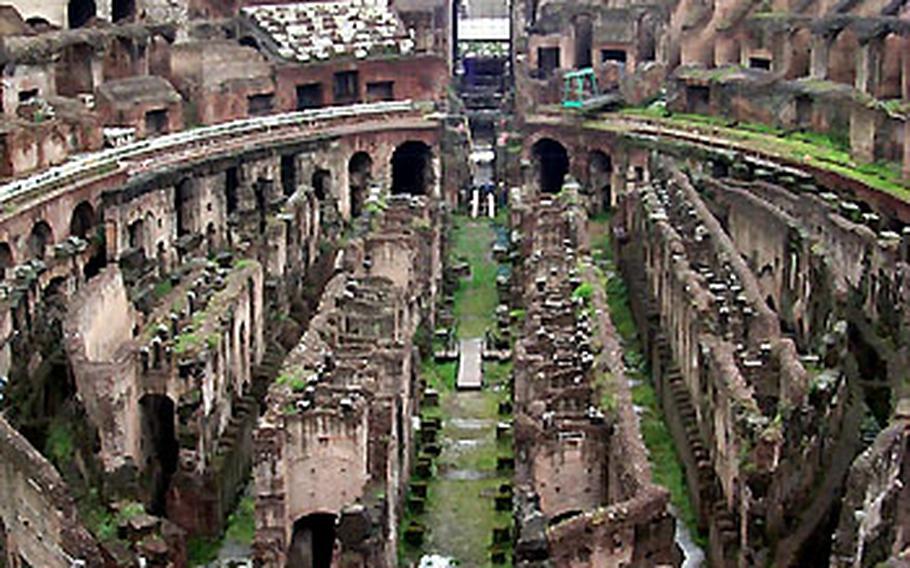 Tourists gawk at the massive interior of the Colosseum, the largest Roman amphitheater in the world. (Ward Sanderson / S&S)

Many of us bank our hard-earned leave for those stressful holiday pilgrimages back to the States, usually to visit family members we hardly know anymore or friends we’ve grown apart from. Exploring our backyard, Europe, is something we enjoy doing and would like to do more of but don’t have nearly enough time or money to do.

On a recent trip to Italy, I was lucky enough to spend a weekend off in Rome with my boss, a man whose knowledge of the Eternal City is legend. The following is an adaptation of the two-day itinerary we used.

In 48 hours, we crammed in as many of Rome’s important sights and museums as we could, without anyone losing their jobs or their minds. Nevertheless, it was a very busy two days.

If your idea of a weekend getaway is chillin’ on the beach and working your ambidextrous self by slurping down margaritas and day-trading at the same time, Rome should not be your weekend vacation destination. If, however, romance, relics and religion stimulate you, Rome could be the perfect remedy for your workaday blues.

If your hotel offers breakfast, get your lazy keyster out of bed no later than 0700 and head downstairs to carb up. You’re in for one full day of sightseeing and you’ll need the calories! On your way to your first stop, pick up some picnic supplies (sandwiches, snacks, etc.) from a local grocer or trattoria.

Begin your day at the Piazza Venezia, where the gargantuan Vittorio Emanuelle II monument will be the most hideous edifice you’ll be subjected to on this tour. Finished in 1911 to celebrate Italy’s unification, the tomb of an unknown Italian soldier from World War I sits just above the center staircase.

Back when Rome was the center of the world, the center of Rome was the Forum, which can be reached by walking down the Via Forii Imperiali, which is to the left as you face the Vittorio Emanuelle. The various buildings of the Forum, set in the valley between the Palatine and Capitoline Hills, were constructed during a span of more than 900 years. Rising from the grassy gorge are the disintegrating remains of Republican buildings, monuments and Imperial temples.

Be sure not to miss the Temple of Saturn, Arch of Titus, Temple of Antoninus and Faustina, the House of the Vestal Virgins and the Curia Building, where the senate used to meet.

Rome’s wealthy and powerful built their palaces and temples atop the Palatine Hill, which also makes a great place for you to have your picnic lunch. From the Forum, scale the Palatine to see the ruins of the House of Livia, the Domus Augustana, the Baths of Septimus Severus and the Palace of the Flavians. From atop the Palatine, you can also view the ruins of the Circus Maximus, the site of the chariot races made famous in “Ben Hur.”

A hop, skip and a jump from the Palatine is the Colosseum, also known as the Flavian Amphitheater and arguably Rome’s most famous monument. While at the Colosseum, be sure to check out the gift shop, which houses some nifty books on ancient Roman architecture.

If you’re feeling a little road weary, rest your bones at a nearby café or grab a double hit of espresso and march ahead.

Make your way to the Pantheon. One of Imperial Rome’s most fascinating and best-preserved structures, it was built as a pagan temple in 27 B.C. by Marcus Agrippa, rebuilt by Emperor Hadrian in A.D. 120, and was consecrated as a Catholic church during the Middle Ages.

From the Pantheon, start your way to the Trevi Fountain. Popularized in the movies “Three Coins in the Fountain” and “La Dolce Vita,” the Trevi Fountain is the world’s most famous wishing well. Legend has it that you can ensure your return to Rome by tossing a coin into the fountain.

Several shops featuring Italy’s famous gelato, or ice cream, are just off the Trevi Fountain. You may want to take a break now to indulge in some.

If you’re not exhausted at this point, head for the Piazza Navona, one of Rome’s best-loved squares. Here you find Bernini’s masterpiece “Fontana dei Quattro Fiumi” (“Fountain of the Four Rivers”). Just behind the fountain is the Church of Sant’Agnese in Agone, one of the best examples of Baroque architecture in Rome.

Piazza Navona is also a good place to have dinner, but you’ll find that most places won’t start serving it until 8 p.m. Find one of the many affordable trattorias on the square or explore the alleyways nearby for an evening at a local osteria.

Grab breakfast, get out the door before 8 a.m. and start your day at 9 at the Borghese Museum in Villa Borghese. Although known primarily for the works by Titian, Bernini and Canova housed in the permanent collection, be sure not to overlook the Caravaggio room.

From the Borghese, take a leisurely stroll to Vatican City. The piazza inside the Vatican walls is St. Peter’s Square. Built in the 17th century, the square was designed by Bernini. When in Rome, the pope makes an appearance every Sunday at noon from a window at the Vatican palace and throngs of the faithful from the world over show up to receive his blessing.

From the square, walk back outside the gate and to the left to find the Vatican Museum, home of the Sistine Chapel. Once in the door, head past the museum exhibits and straight for the chapel. Considered a “milestone” in the history of Western art, Michelangelo’s ceiling masterpiece took four years to complete and is 10,000 square feet. View the museum’s unique collection of art on your way out of the building.

Just outside of the museum are numerous places to have a late lunch or another gelato.

St. Peter’s Basilica, the largest church in the world and one of the greatest artistic achievements of the Renaissance Era, is your next stop. Among the most famous works of art housed in St. Peter’s is Michelangelo’s “Pietà,” which can be found in the first chapel on the right as you enter. For the bravest of souls, a climb to the top of the dome is a “must.” If you have even the slightest fear of heights, skip it.

The Piazza di Spagna at the foot of the Spanish Steps is easily reached via subway from the Vatican. The steps are a great place to sit, relax and people-watch. Nearby you’ll find a multitude of designer-wear stores that are fun to window shop. The view of Rome from the top of the steps is particularly romantic and it is easy to find couples there sharing them.

Close to the Spanish Steps, you’ll find many tourist trap eateries. Great meals in authentic restaurants can be found if you wander the streets just above the steps.

On your way back to your hotel, stop into a local bar or café and take time to reflect on the, um, monumental task you’ve accomplished in just two days.

Roxanne Cooper is marketing manager for Stars and Stripes and works in Stripes’ central office in Washington, D.C.

Where to find out about Italy on the Web

For more information about Italy, try these Web sites:

¶ www.go-to-Italy.com: If you’ve dreamed of spending the night in a 17th-century Italian monastery but didn’t necessarily want to join the priesthood, here’s your chance! Groups of 20 or more can book rooms for as little as 39 euros per person per night.

¶ www.italianmade.com: Sponsored by the Italian Ministry of Agriculture, this official but user-friendly site features a comprehensive everything-you-wanted-to-know-but-were-afraid-to-ask treatment of Italian food and wine. Be sure to check out the free dowloadable cookbooks and pamphlets in the vast “Library” section.

¶ www.cyberitalian.com: Want to woo your sweetheart with a little romance? Why not learn a little Italian with the free introductory course offered by this site?

¶ www.timeout.com: Whether you’re seeking a hip-hop hangout, a cool café or a provincial pub, Time Out’s Rome listings are sure to deliver.

¶ www.historyforkids.org: If you plan to roam the Roman ruins with rugrats and you want them to do a little research on their trip, point them to this site. Written by a professor of ancient history at Portland State University, it features both a teacher’s guide and Rome-related crafts and projects.

¶ www.museionline.it: For up-to-the-minute information on most of Rome’s major museums, head for this site, supported the Ministry of Cultural Estate and Activities.

¶ www.academicinfo.net/archyitaly.html: If you believe there’s a little bit of Indiana Jones in everyone (and maybe there’s too much in you?), check out this site for the colossal list of links to Roman archeology and history.

¶ www.musicaitaliana.com: Should your interest in Italian warblers surpass a fleeting fancy, check out this list of musicians and related links.

¶ Pack fashionably casual yet comfy: In Rome, everything is art, including your attire. If you’re thinking about packing Air Jordans, cut-offs and T-shirts for this trip, think again. At many religious sights and museums, you’ll be left out in the cold if you’re not properly covered up (no shorts, mini-skirts, sleeveless shirts, etc.). However, this doesn’t mean pairing Ferragamos with Missoni either. Think Dockers and loafers.

¶ Plan ahead: The extensive listings at www.timeout.com will help you research museum hours and entry fees as well as upcoming festivals and events.