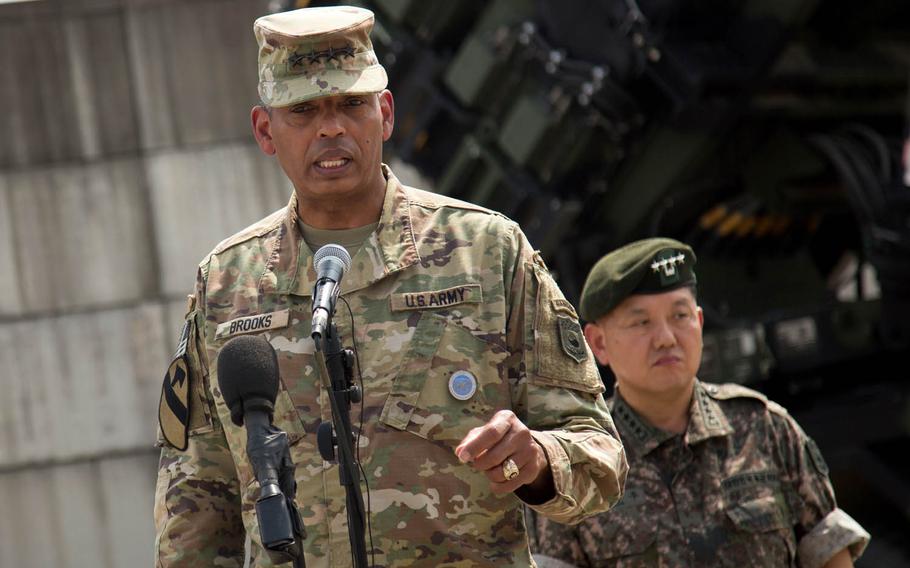 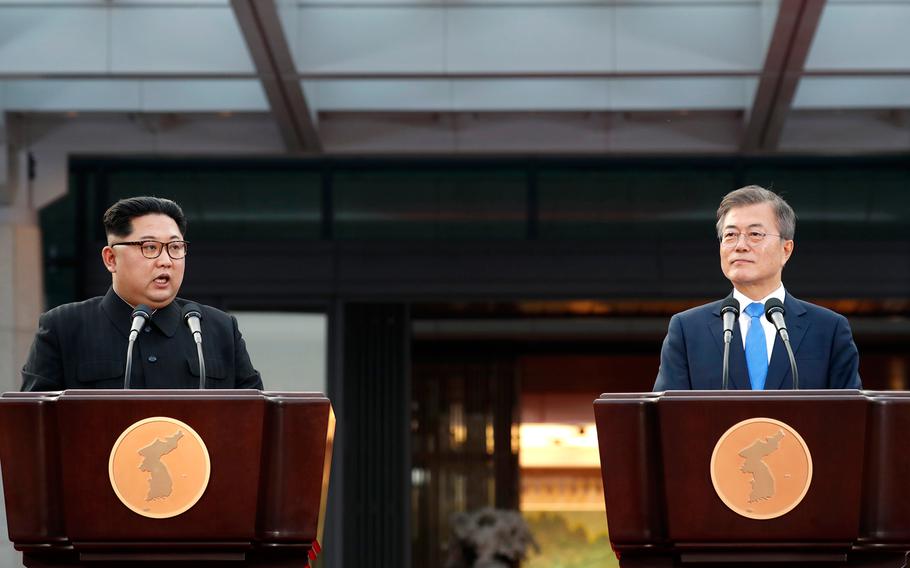 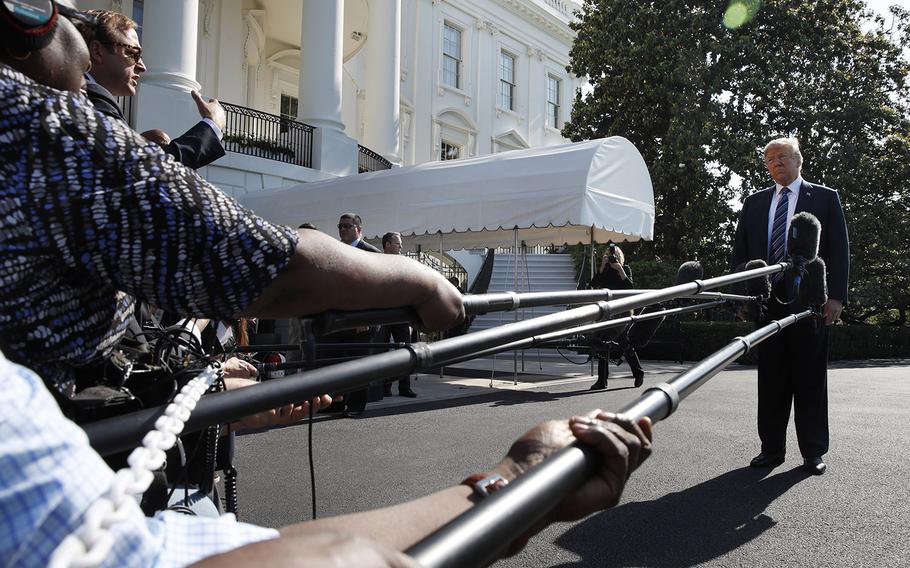 President Donald Trump speaks to the media as he walks to the Marine One helicopter Friday, May 25, 2018, on the South Lawn of the White House in Washington. (Jacquelyn Martin/AP)

Trump said Friday that the U.S. is now “talking to” North Korea, and said “everybody plays games.” Trump had previously welcomed a statement by the North that it remains willing to hold talks “at any time.”

“Very good news to receive the warm and productive statement from North Korea,” he wrote in a tweet. “We will soon see where it will lead, hopefully to long and enduring prosperity and peace.

“Only time (and talent) will tell!” he added. Trump announced Thursday that he was canceling the June 12 summit with the North in Singapore, citing “tremendous anger and open hostility.”

He insisted his so-called “maximum pressure” policy of tough economic sanctions and diplomatic pressure against Pyongyang will continue and warned that the U.S. military was prepared to react if necessary. But the president adopted a warmer tone after the North’s outreach on Friday, saying it was even possible the summit could take place on June 12 as planned. “They very much want to do it, we’d like to do it,” he told reporters at the White House.

U.S. Defense Secretary Jim Mattis echoed Trump’s comments later at the Pentagon, telling reporters he remained optimistic about the potential for a historic summit between the two nations.

North Korea expressed regret about the decision in a statement on the state-run Korean Central News Agency.

“We have inwardly highly appreciated President Trump for having made the bold decision, which any other U.S. presidents dared not, and made efforts for such a crucial event as the summit,” Vice Foreign Minister Kim Kye Gwan was quoted as saying.

“His sudden and unilateral announcement to cancel the summit is something unexpected to us, and we cannot but feel great regret for it,” he added.

Kim, who was a leading negotiator for an aid-for-disarmament deal that collapsed under former President George W. Bush’s administration, said the summit would have been a good starting place for negotiations. He said the North Koreans remain “unchanged in our goal” of peace and stability and are willing to “offer the U.S. side time and opportunity.”

“We would like to make known to the U.S. side once again that we have the intent to sit with the U.S. side to solve problem regardless of ways at any time,” he said.

The mix of flattery and regret signaled an apologetic tone that contrasted with the harsh rhetoric issued the day before against Vice President Mike Pence, which appeared to be the trigger for Trump’s decision.

Mattis said the Pentagon would continue to follow American diplomats’ leads on North Korea, signaling the U.S. military was not seeking to raise tensions between the nations as negotiations continue.

The defense chief said the United States would not increase its military training operations on the peninsula after Trump called off the meeting, at least temporarily, Thursday.

"We are not changing anything right now, it is steady as she goes,” Mattis said. “The diplomats are in the lead and in charge and we give them our best wishes to have a fruitful way forward."

Mattis said Trump had sent senior officials a positive note Friday morning about the potential for the summit to occur, which he called “good news.”

He raised the possibility the meeting could still occur June 12, adding that the cancelation was part of the “usual give and take, you know, of trying to put together big summits and stuff.”

South Korea scrambled to salvage the diplomatic process that began with the North’s agreement to participate in the Olympics earlier this year and culminated in President Moon Jae-in’s high-profile summit with Kim Jong Un in the heavily fortified border area last month.

The two leaders agreed to work toward the “complete denuclearization” of the divided peninsula and forge a permanent peace to replace the armistice that ended the 1950-53 Korean War.

But their meeting was largely seen as a prelude to what would have been the first-ever U.S.-North Korean summit.

Moon urged Trump and Kim to talk directly to each other, saying “the denuclearization of the Korean Peninsula and the establishment of permanent peace are historic tasks that can neither be abandoned nor delayed,” according to his office.

“I am very perplexed, and it is very regrettable that the North Korea-U.S. summit will not be held on June 12 as scheduled,” he was quoted as saying during an emergency meeting to discuss Trump’s announcement.

Later Friday, Unification Minister Cho Myoung-gyon vowed that Seoul will “do its part” to carry out the agreements reached at the inter-Korean summit and said it appears the North “remains sincere” about implementing the deal as well.

Trump’s decision got mixed reviews from the international community. U.N. Secretary-General Antonio Guterres expressed deep concern and urged “the parties to continue their dialogue to find the path to the peaceful and verifiable denuclearization of the Korean Peninsula.”

Japan, a staunch U.S. ally that had been concerned about being sidelined in the diplomatic efforts with the North, showed “understanding” of the decision amid concerns that Pyongyang wasn’t serious about giving its nuclear weapons.

“The important thing is not holding a meeting itself but becoming an opportunity to move toward the solution of the nuclear and missile issues as well as the abduction issue,” Chief Cabinet Secretary Yoshihide Suga told reporters, referring to Japanese captured by the North.

“Japan, the United States and South Korea will continue to put pressure on North Korea to change its policy,” the top government spokesman said, according to the Kyodo News agency.

Trump announced his decision in a letter to the North Korean leader, which was released Thursday hours after veteran North Korean diplomat Choe Son Hui called Pence a “political dummy” for invoking the so-called “Libya model” for giving up a nuclear weapons program.

Then-Libyan leader Moammar Gadhafi surrendered his country’s nuclear program in the early 2000s in exchange for sanctions relief, but he was later killed at the hands of a mob after being ousted in an uprising supported by NATO airstrikes.

North Korea has pointed to his fate as an example of why they need a nuclear arsenal, which the communist state insists is for self-defense.

Trump’s agreement to meet Kim, which came after the president met South Korean envoys who said the North Korean leader was ready to discuss denuclearization, took the international community by surprise.

Many experts warned the two sides would likely clash over the definition of denuclearization, with Washington seeking the dismantlement of the North’s nuclear weapons and Pyongyang seeking a phased approach with rewards including the relaxation of punishing economic sanctions.

“I am not worried about it because the opportunity is not lost. It is just delayed,” Brooks was quoted as saying by the Yonhap News Agency.

“Don’t worry about what happened last night because it may have been too early to celebrate, it is also too early to quit. Never quit,” he said during a speech in Seoul.

Brooks, who commands the some 28,500 U.S. servicemembers based on the peninsula, said the decades-old alliance between the two countries remains strong.