Thousands of National Guard troops could remain in DC into March 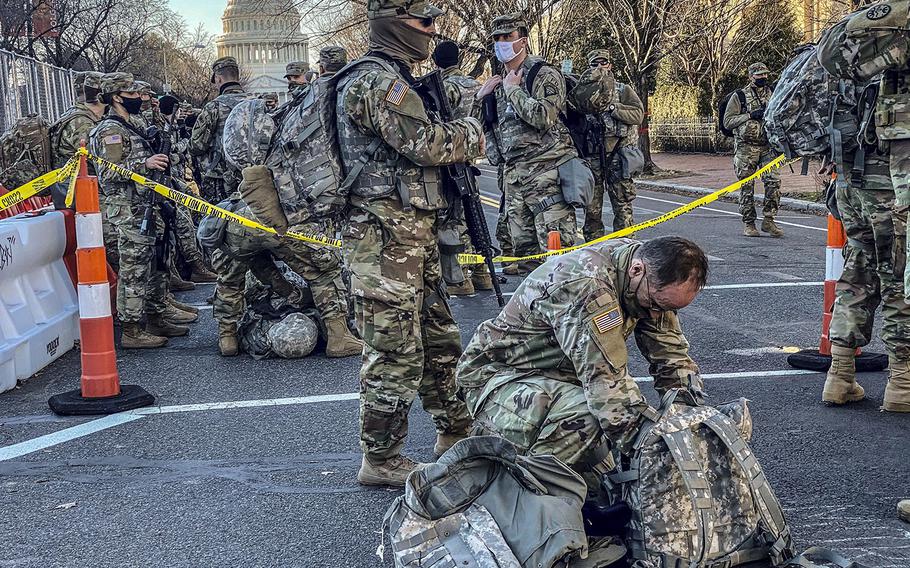 Several thousand National Guard troops could remain in Washington, D.C., to bolster security through mid-March under a plan that the National Guard Bureau is developing with federal law enforcement officials, a Guard spokeswoman said Friday.

Up to 7,000 National Guard troops could remain in D.C. through March 12, said Nahaku McFadden, a spokeswoman for the National Guard Bureau. The troops would come from volunteers among the about 25,600 forces rushed into the nation’s capital in recent weeks to secure the city for President Joe Biden’s inauguration on Wednesday, two weeks after the Jan. 6 attack on the U.S. Capitol.

The plan to extend some troops’ deployments comes at the request of federal law enforcement officials, including the Secret Service, which led planning for inauguration-related security, officials said. The intent to extend deployments beyond the end of January, as initially planned, comes as officials fear the potential for more violence in the wake of the storming of the Capitol by a mob of former President Donald Trump’s supporters. Five people died, including one Capitol police officer, in the melee.

McFadden said troops deployed to Washington would not be required to remain in D.C. Those who volunteer to support the longer operation will have their initial 31-day mobilizations orders modified.

The nearly 26,000 Guard troops sent into D.C. ahead of Biden’s inauguration came from all 50 states and four U.S. territories, McFadden said. Guard troops — some armed at the Capitol — faced no security incidents during the inauguration nor at any other time since Jan. 6, she said.

Troops were spread across the city, with some manning traffic checkpoints and others standing watch around the Capitol complex, the National Mall and the White House. Most remained in place through Friday, officials said.

About 15,000 of those troops were slated to begin returning home this weekend, Guard officials said Thursday.

The extensions also come amid some controversy. Images of Guard troops sleeping in a parking structure circulated online after they were removed from areas that they had been using to take rest breaks while working 12-hour shifts. Troops have since been allowed back indoors “within congressional buildings, including the U.S. Capitol” to take their on-duty breaks, Air Force Maj. Matthew Murphy, a National Guard spokesman, said in a statement issued Friday.

The Wall Street Journal also reported Friday that some 200 National Guard troops deployed for inauguration support had tested positive for the coronavirus in recent days.

McFadden and other National Guard officials declined to confirm the report, citing Pentagon policy, which restricts officials from publicly reporting specifics about coronavirus outbreaks as an operational security measure.

Guard forces were screened for symptoms of the coronavirus before deploying to D.C., but not all were tested, McFadden said, in part because of the short timeframe to send forces into Washington.

“We are ensuring we are following [coronavirus] protocols per the [national Centers for Disease Control and Prevention] guidelines,” she said.