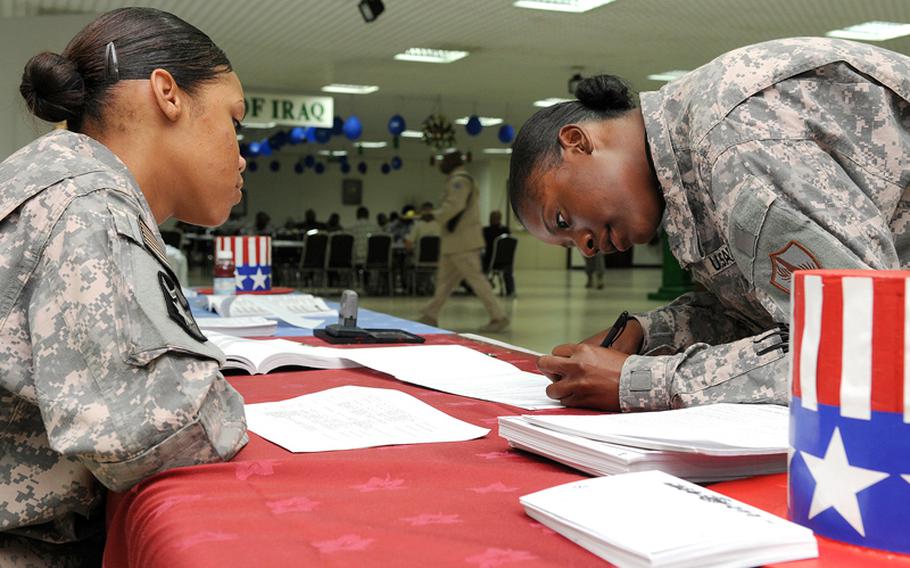 It blames the Department of Defense for foot-dragging on absentee voter reforms that were enacted after the last presidential election.

A four-page report, "Military Voting Update: A Bleak Picture in 2012," builds its worrisome conclusions on what arguably are some thin reeds of data on early ballot requests across nine states, all of which have large military populations and can track voter requests for absentee ballots.

Eric Eversole, executive director of the Military Voter Protection Project (MVPP), is comfortable sounding this alarm to urge the military to improve support of absentee voters in these critical weeks before the Nov. 6 election.

Disappointment with military participation in the 2008 election, which totaled 53 percent versus 64 percent for the general electorate, spurred Congress to strengthen military and overseas voting protections in 2009 with passage of the Military and Overseas Voter Empowerment (MOVE) Act.

It requires states to establish more standard procedures to accommodate military and overseas voters. Voter registration requests and absentee ballot applications now can be emailed. States are required to transmit absentee ballots no later than 45 days before an election, which means by Sept. 22 this year.

The Act also requires the services to set up voting assistance offices on every military base. These offices, the MVPP explains in its report, are "to provide military voters with an opportunity to register, update their voting address and request an absentee ballot &lsquo;as part of the administrative in-processing&hellip;upon arrival at a new duty station.' "

That isn't happening, the report says. Not only are military people not being offered voting assistance each time they report to a new duty station, but follow-on department guidance from 2010, that military voter assistance be comparable to what civilians receive at state driver license branches and social service offices as mandated by the National Voter Registration Act, also has been ignored, the report contends.

Asked to comment, the Defense Department's Federal Voting Assistance Program issued a statement that it respects "the perspectives" in the report. It also "is committed to facilitating the absentee registration process" and makes "resources available to the greatest extent possible, communicating the availability of resources via myriad media."

Eversole, who authored the report, conceded he couldn't make an exact comparison of total ballot requests two months before the 2008 election and ballot requests today. But Eversole said he is in close contact with state boards of election and officials share his concern that the size of the surge needed just to match 2008 absentee voting levels "is staggering."

Don Palmer, secretary of the Virginia State Board of Elections, said he doesn't challenge critics who say the Department of Defense and the services have "work to do" to implement reforms mandated by the MOVE Act.

"I am a reservist in the Navy. I've been doing it for 22 years. And obviously [voter support] isn't their first priority," Palmer said. "We struggle sometimes to have DOD show the same urgency because they have other missions. I understand that."

Terry Wagoner, absentee voter coordinator for Virginia's board of elections, said it is "still very early" to try to assess the level of military participation. The number of ballot requests will surge, she said.

"Where I would start to become very concerned would be at that 45-day mark" if numbers aren't up sharply by then, she said. On Aug. 24, Wagoner was set to host an afternoon of training on absentee voting procedures for voter assistance officers from Virginia's nine military bases.

Wagoner views Eversole, she said, as a partner in turning out the military vote, and she understands why his report sounds so gloomy.

"Eric's job is to paint a bleak picture so he can go out there and make it better. I support him wholeheartedly," Wagoner said. "But I refuse to let statistics stop me from doing everything I can" to help absentee voters.

Wagoner expects soon to be fielding 200 queries a day, via phone and email. Completed ballots will still have to be mailed. But with registration and ballot distribution now possible via email, she said, wait times should drop significantly and word should spread that the process has improved.

"The disappointment here is we're going to have difficulty meeting 2008 numbers," Eversole said, "which Congress said was the basis for sweeping reform. So are we really shooting for status quo?"