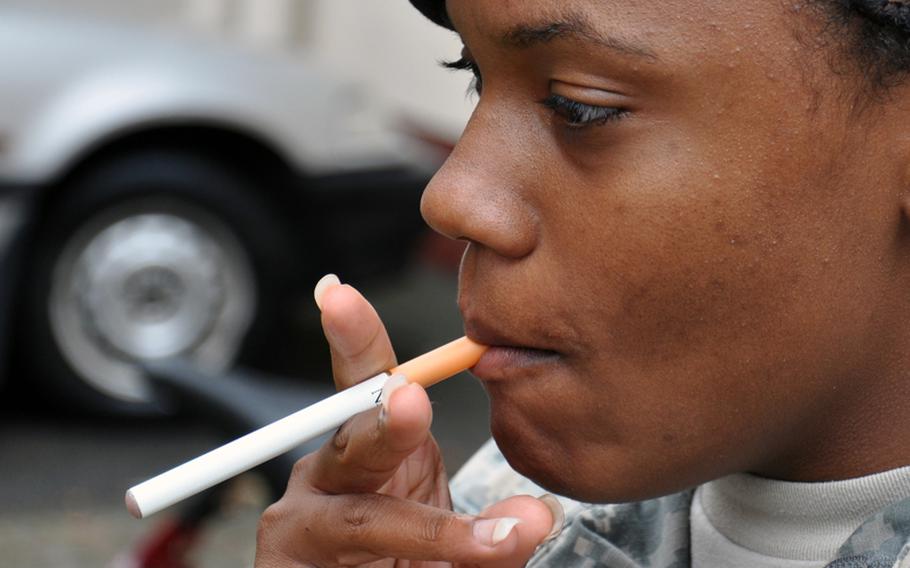 Pfc. Lashaun Coward, stationed in Bamberg, Germany, tries an e-cigarette for the first time while on a smoke break Friday. Her verdict: "What is the difference between it and a real cigarette?" (Dan Blottenberger/Stars and Stripes)

Pfc. Lashaun Coward, stationed in Bamberg, Germany, tries an e-cigarette for the first time while on a smoke break Friday. Her verdict: "What is the difference between it and a real cigarette?" (Dan Blottenberger/Stars and Stripes) 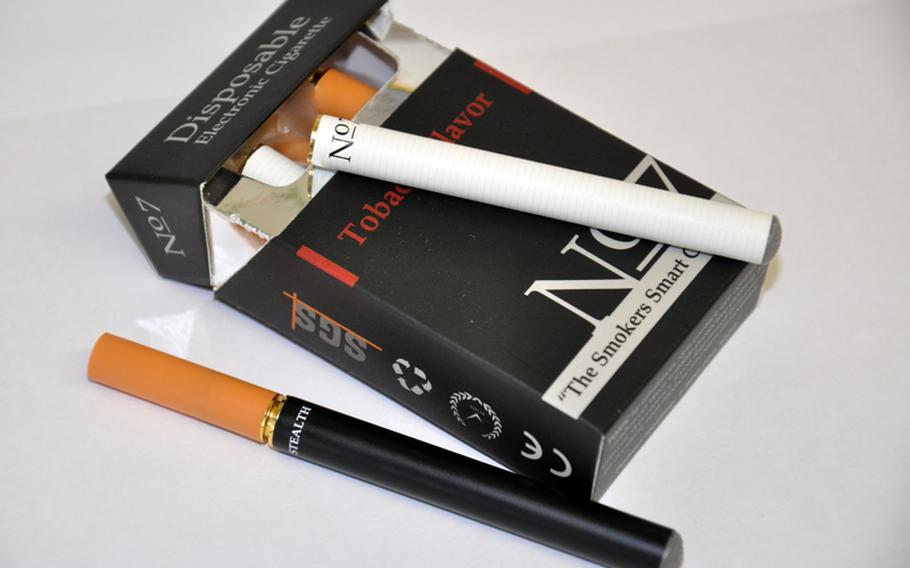 The military might want its troops to quit smoking, just not by using electronic cigarettes.

In recent weeks, the Air Force and at least one Marine base banned the use of the smokeless gadgets from the workplace.

Also known as e-cigarettes, the devices came onto the scene about six years ago as a smokeless alternative to the real thing. But instead of needing a match to get started, e-cigs are battery-operated devices that contain a nicotine-filled cartridge, which is delivered to the user as a vapor.

Citing a Food and Drug Administration test that found some brands of electronic cigarettes contain potentially toxic chemicals, the Air Force surgeon general's office last week categorized them as "tobacco products," and thus prohibits their use in most Air Force facilities. Last month, leaders at Marine Corps Base Quantico banned the products in their facilities.

The e-cigarette even looks like a cigarette, complete with a red light at the tip as if it were lit. And e-cigarette users exhale a water vapor that mimics the appearance of smoke.

But, are these devices - estimated at $100 million in annual sales, according to a recent Wall Street Journal article - as bad as, or worse than, real cigarettes?

No one is really sure.

The FDA's "preliminary analysis" into two brands of e-cigarettes found various levels of nicotine and other substances - some it said were known carcinogens or toxic chemicals. But the study also said that because of "variability among products, this analysis should not be used to draw conclusions about what substances are or are not present in particular cigarettes."

In fact, there aren't many studies of any kind on electronic cigarettes, according to Jean-Francois Elter, who has posted dozens of reports on smoking and tobacco cessation on websites such as BMC Public Health, which provides public access to peer-reviewed medical studies.

As a result, the Air Force isn't taking any chances, it appears.

"No studies have been done to demonstrate the safety or effectiveness of these products as tobacco cessation aids, and they are not approved by the FDA as a drug delivery device," Dr. (Lt. Gen.) Charles B. Green, the Air Force surgeon general, wrote in last week's memo. "Due to the nature, appearance and safety concerns of electronic cigarettes, they are considered to be in the same category of tobacco products. ..."

The surgeon general's message, however, does not prohibit airmen from using the electronic cigarettes.

Some visitors to the Air Force website where Green's message was posted claim they've used the e-cigarette to stop smoking.

"I have been tobacco free for two years because of these devices when nothing else worked at all," wrote Cody from Texas.

"Please do more research on this topic," another states. "I smoked over a pack a day for 18 years and quit in 1 day with these, ...," said Jeff P. from Fort Gordon, Ga.

According to the American Cancer Society, the products first appeared in 2004 and were manufactured by a Chinese company. Since then, other companies have launched product lines, with a variety of looks and - according to critics - an even greater disparity of ingredients.

A Colleyville, Texas-based company, E-Cigarettes Choice, claims it has recently designed an e-cigarette called the "No. 7 Stealth" with soldiers on the battlefield in mind. The e-cigarette is black in color, and the tip does not illuminate, thus avoiding detection by the enemy while on combat operations, according to company officials.

Neither the Army and Air Force Exchange Service nor Navy Exchange sells electronic cigarettes of any type, citing lack of interest from customers.

The products are available online, though, and also can also be purchased off base in countries such as Italy, Germany and England - though they're far less popular and harder to find than regular cigarettes.