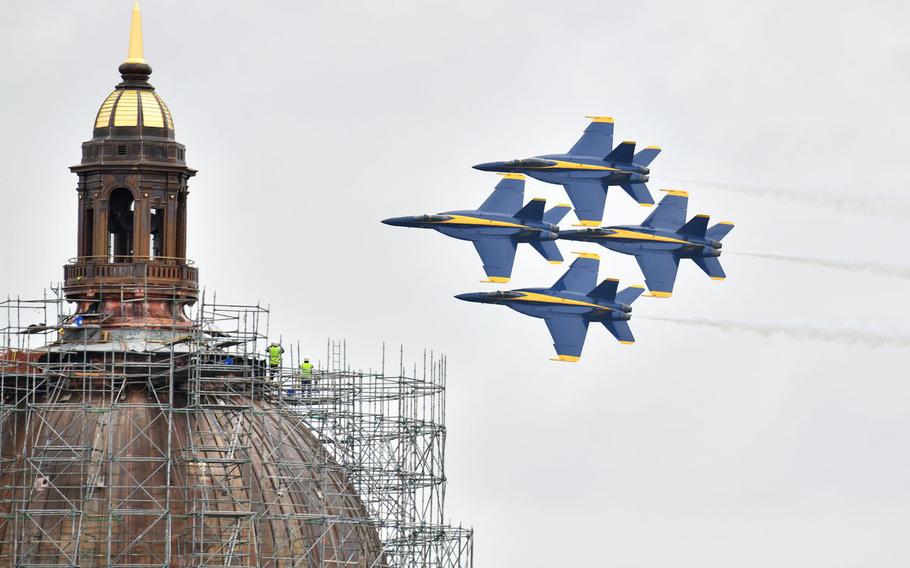 (Tribune News Service) — How rare is it for the Blue Angels and Thunderbirds to perform together at one time in one place for one spectacular air show? So rare, the Pentagon has to approve it.

“It’s to make sure that there is fairness amongst the schedules,” said Kevin Walsh, executive director of Thunder Over Michigan. “Normally it would never happen.”

But it is happening — and it’s happening this weekend at the Willow Run Airport in Ypsilanti.

For the first time ever, six fighter jets from the U.S. Navy’s Blue Angels and six from the U.S. Air Force’s Thunderbirds will perform two shows each — two Saturday and two Sunday — for Thunder Over Michigan.

“This is pure entertainment,” said Walsh.

This year’s joint show came about after the Blue Angels had some cancellations in their schedule because of COVID-19.

“This is an absolute first in our state,” said Walsh. “It just worked out that they both had the opportunity to come to Michigan and they both know Michigan well. They know the hospitality is second to none here.”

And for fans who’d love to meet these pilots up close and in person and snag an autograph, The Henry Ford on Friday is offering a rare opportunity for the public to meet 40 pilots and their crew members inside its Henry Ford Museum of American Innovation. Museum admission isn’t required.

For a place that’s all about innovation, Christian Cullen, The Henry Ford’s managing director of integrated operations, said it’s significant to be able to host pilots and crew from both the Blue Angels and Thunderbirds.

“To have that here and showcase our military’s elite, that’s what the Henry Ford is about,” said Cullen. “... We’re honored to do it. American innovation — what better example.”

Cullen encourages anyone interested in meeting these pilots up close and in person to come out.

“This is a unique opportunity that doesn’t happen very often,” said Cullen.

Thunder Over Michigan, now in its 23rd year, is an annual fundraiser for the Yankee Air Museum, an aviation museum located at Willow Run. Known for featuring large gatherings of vintage aircrafts, this year’s show will be no different, said Walsh, featuring the largest gathering of Mitchell B-25 bombers.

Used by all branches of the military and all allied nations, it’ll be about “really celebrating the design and build of the airplane,” said Walsh.

This year’s Thunder Over Michigan returns after being canceled last year because of COVID. And while other shows canceled again this year as cases rose, Walsh said they stuck with it and now tickets are selling fast.

But expect a different format this weekend for seating not because of COVID but due to construction at Willow Run.

Instead of selling individual tickets, Thunder Over Michigan is offering car passes this year — $185 per car — and limiting attendance to 1,800 cars per show.

Cars will drive in and park on the airfield and have a certain amount of space per car to set up chairs outside and enjoy the show.

Walsh said as they were coming up with different plans in case COVID was an issue, they decided to use one of those formats because of the construction at Willow Run, which included replacing water and sewer lines.

“This is the format for our restricted COVID show and we said, ‘Let’s keep this same format with cars on the field,’” said Walsh.

Aside from the air shows, there will be displays, helicopter rides and food options.

Walsh is so grateful that he and his team decided to hold on and move forward with this year’s show given that now they’ll have both the Blue Angels and Thunderbirds.

“How about that for being patient?” he says with a laugh.