With election day set, many Afghans doubt vote will be fair 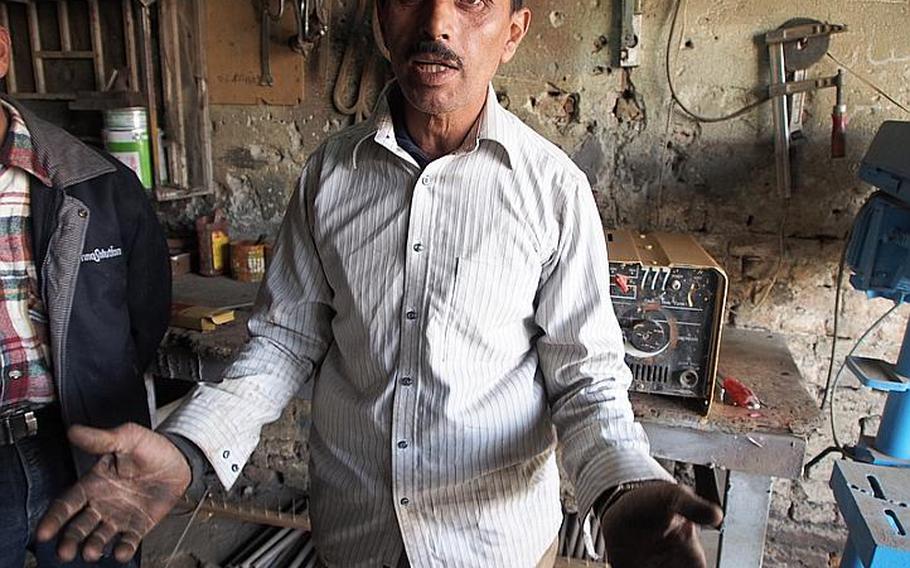 Buy Photo
Like many Afghans, Abdul Jalil, who owns an iron-working shop in Kabul, says he is skeptical the country's recently announced presidential election will be free and fair. Afghanistan's election commission has set the election for April 5, 2014, and many in Afghanistan are concerned the country will not be able to provide security and prevent fraud during voting. (Heath Druzin/Stars and Stripes)

KABUL &mdash; Now that Afghanistan&rsquo;s election commission has set a date for the next presidential poll, the difficult work of preparing for a vote in a rural, mountainous country still at war begins. Many Afghans are skeptical the election can be free and fair amid the possibility of violence, fraud and even snow-bound villagers being denied the vote by Mother Nature.

The Afghanistan Independent Election Commission announced last week that the vote will take place April 5, 2014, almost nine months ahead of the deadline for all international combat troops to leave the country, and will include provincial council elections. The date falls well before the snow melts in much of the country&rsquo;s rugged mountains, which drew the immediate ire of members of parliament representing Afghanistan&rsquo;s high country.

Farooki Beheshti, a member of parliament from the northern province of Bamiyan, said the election will be illegitimate if it is held so early in the year that mountain villagers cannot participate.

&ldquo;Each year on this date about 65 percent of the country is still under snow, so how can people in the rural areas, where the roads are blocked, come out and exercise their vote?&rdquo; he said.

The election commission, which will oversee the poll, plans to bring in nearly all &ldquo;nonsensitive&rdquo; polling station materials to mountainous areas before winter sets in and then will rely on NATO air power to fly in ballots for the election, commission spokesman Noor Mohammad Noor said.

The International Security Assistance Force is still doing mission analysis for the elections to determine what kind of support it will provide the Afghan government, said Jamie Graybeal, a spokesman for the international military force in Afghanistan.

Even if the commission can figure out how to get the vote out in the mountains, there are still many challenges. The 2009 election was criticized for having low turnout because many residents were scared to vote because of insurgent threats -- fighting still rages in many provinces, especially in the south and the east -- and there were reports of widespread fraud and ballot stuffing. While the constitution bars President Hamid Karzai from running for a third term, some Afghans are concerned that he might try to retain power, especially after he extended his last term by postponing elections, a move many said was illegal.

One of the biggest hurdles will be quelling violence in the next 17 months. With the withdrawal of international troops under way, voter turnout at the country&rsquo;s 6,000 polling places could depend on how much progress the remaining NATO contingent can make in Afghanistan&rsquo;s hot spots.

Shafiq Ahmad, who lives in volatile Logar province but runs a part-time money exchange operation in Kabul, said if the election were held today he could face death just for trying to vote.

&ldquo;We can&rsquo;t get the voting card because if we get caught by insurgents with it, we face problems,&rdquo; he said.

Wadeer Safi, professor of law and politics at Kabul University, said time is running out to quell the violence ahead of the vote.

&ldquo;I&rsquo;m not sure [it can happen], because in the past 11 years they were not able to improve the security, so how can they do it in another year and a half?&rdquo; he said.

Noor, the election commission spokesman, said the commission has convened a council of the country&rsquo;s top security officials to discuss election preparations.

&ldquo;We have invited the security deputy minister of the Interior Ministry, chief of staff for the Ministry of Defense and officials from the National Security Directorate, and they have promised they will secure the environment for the election,&rdquo; he said.

Jan Dad Spinghar, with the election watchdog Free and Fair Election Foundation of Afghanistan, welcomed the announcement of the election date, but said reforms at the government&rsquo;s election commission are necessary to ensure a fair vote. The president chooses all members of the commission and Karzai has resisted calls to add two foreign members to help guarantee the independence of the commission.

&ldquo;[Currently] all commissioners are selected by the president and there is no structure to guarantee impartiality or the qualifications of commissioners,&rdquo; he said.

A budding controversy also surrounds the scheduling of the provincial council elections on the same date, which would mean council members would be allowed to stay one year past their terms, which expire in 2013. Several members of parliament have said the move is illegal and are calling for changes.

&ldquo;No one has the authority to give one more year to [them],&rdquo; said Mohammad Akbar Stanakzai, a member of parliament from Logar province.

The corrupt, ineffective governance of the post-Taliban era has left many ordinary Afgh skeptical that another election can change things in a country beset by poverty, unemployment and illiteracy. This feeling was solidified by the 2009 elections, which were marred by reports of voter fraud and ballot stuffing.

Abdul Jalil, who owns an iron-working shop in Kabul, would rather see the election postponed until the government reaches a peace deal with the Taliban and foreign troops leave.

&ldquo;The election can only be held when there is security in the country and our people don&rsquo;t hear the sounds of mortars and bombs,&rdquo; he said.

Sami Khairkhwa, who runs an electronics shop in Kabul, cited an Afghan proverb, saying he doesn&rsquo;t believe that an election will reverse the culture of graft that has crept into Afghan institutions.