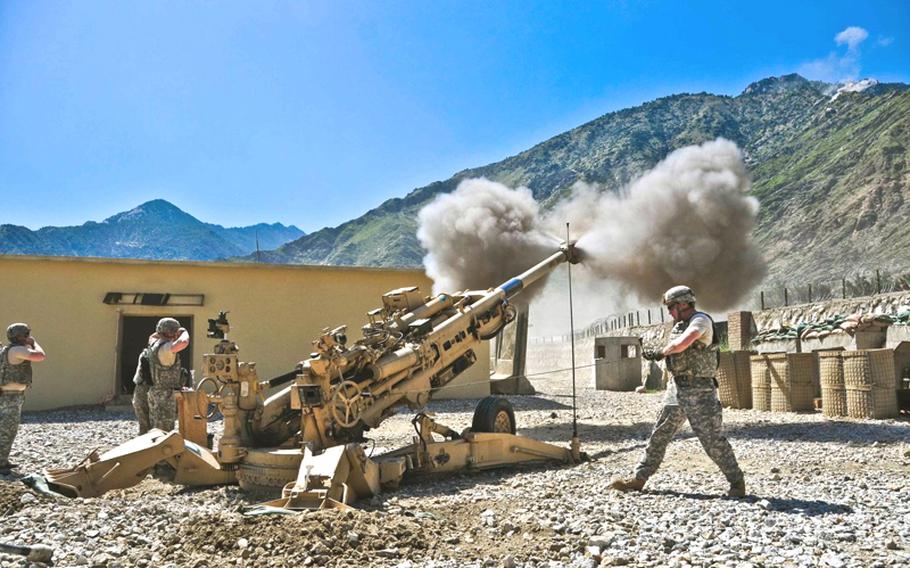 Soldiers with Bravo Battery, 3rd Battalion, 321st Field Artillery Regiment fire a howitzer on May 24 from FOB Blessing, Afghanistan. The gun was destroyed during a fight with insurgents on June 4. (Courtesy of Jonathan J. Springer)

Soldiers with Bravo Battery, 3rd Battalion, 321st Field Artillery Regiment fire a howitzer on May 24 from FOB Blessing, Afghanistan. The gun was destroyed during a fight with insurgents on June 4. (Courtesy of Jonathan J. Springer) 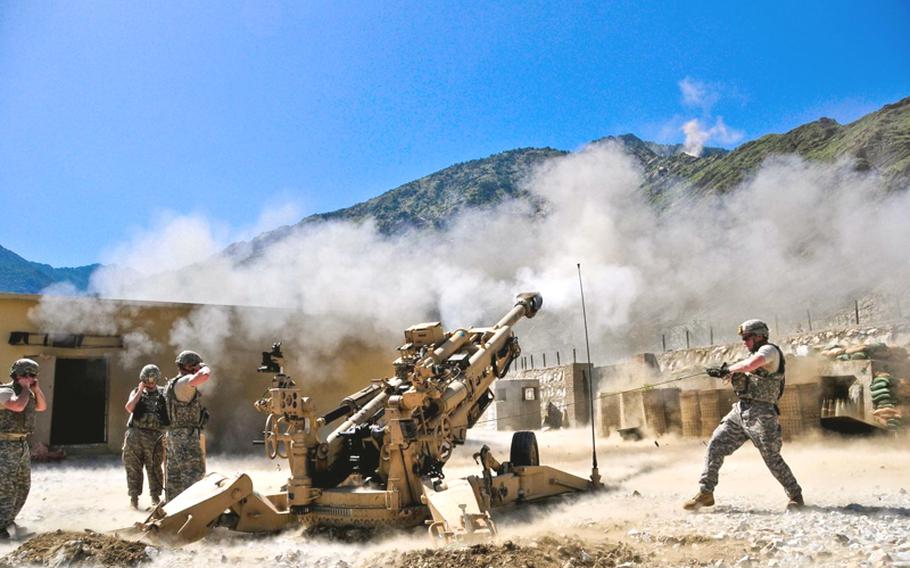 Soldiers with Bravo Battery, 3rd Battalion, 321st Field Artillery Regiment fire a howitzer on May 24th from FOB Blessing, Afghanistan. The gun was destroyed during a fight with insurgents on June 4. (Courtesy of Jonathan J. Springer) 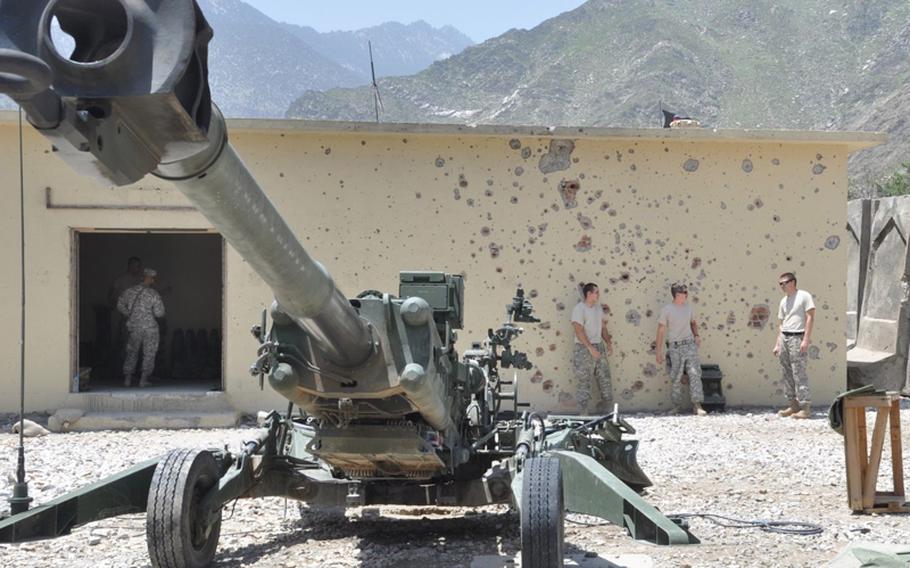 Troops take a break in front of a shrapnel-pocked building after firing a 155 mm howitzer that was later damaged by insurgent attacks and had to be replaced. (Courtesy of Jonathan J. Springer) 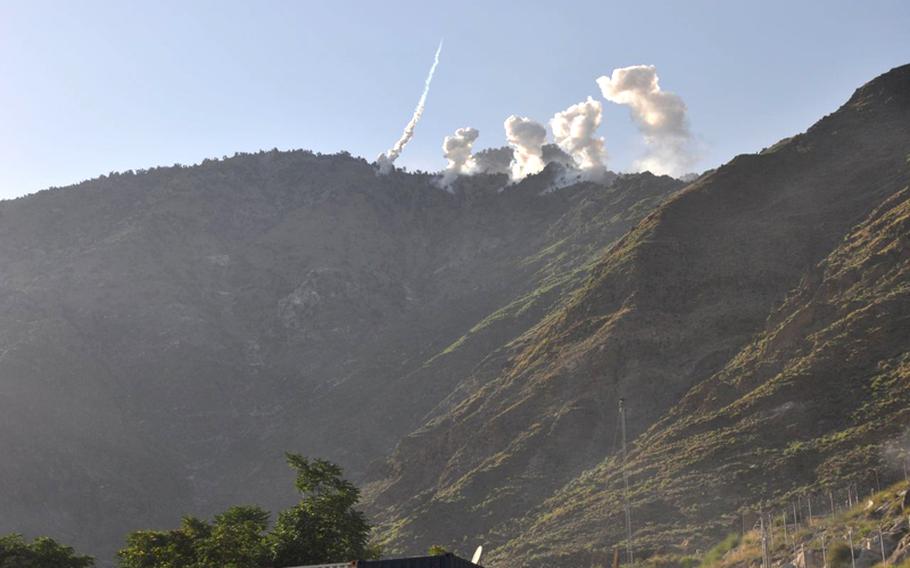 Artillery fire lights up the mountainside outside Camp Blessing on July 23 after insurgents lobbed two rockets that missed the camp. (Courtesy of Jonathan J. Springer) 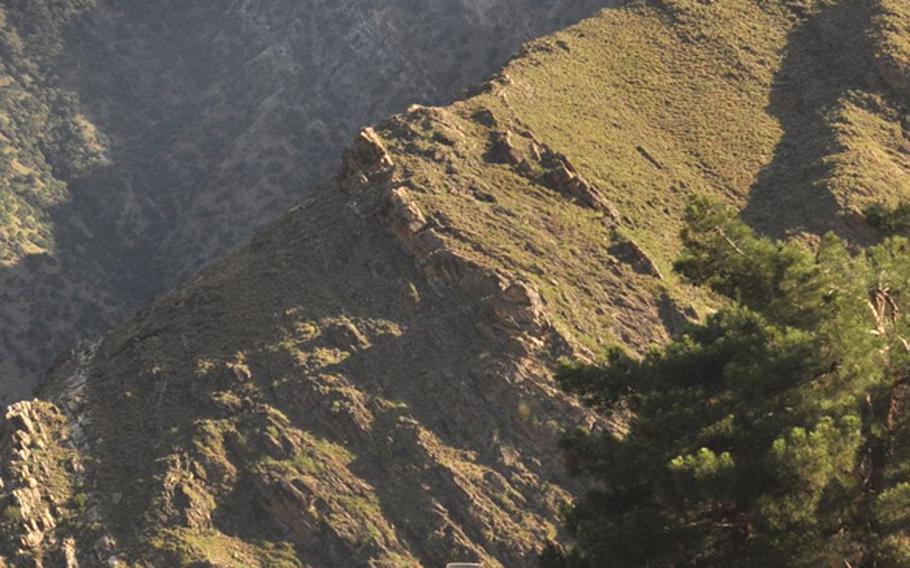 Artillery fire lights up the mountainside right outside Camp Blessing on July 23 after insurgents lobbed two rockets that missed the camp. (Courtesy of Jonathan J. Springer)

NANGALAM, Afghanistan &mdash; Each day in this hot summer fighting season, the thundering boom of U.S. artillery reverberates off mountain walls, shaking the Pech River Valley like a giant&rsquo;s footsteps.

The big guns at Camp Blessing, the 1st Battalion, 327th Infantry Regiment&rsquo;s headquarters in the river valley, fire when any of the four U.S. bases that dot the river road come under attack. They strike when soldiers on patrol are ambushed by insurgents who stalk them from the mountain ridges, or when there are reports of insurgents preparing an assault.

In most of Afghanistan, the counterinsurgency strategy of diplomacy and governance has made these 155 mm howitzer guns almost irrelevant. Most artillery and mortar men are doing infantry jobs, focused on key population centers.

Not so in Pech. This is an artillery fight here, in deeply hostile mountain terrain, and this fighting season is so extreme that there is near constant and imminent threat to soldiers holding the valley floor.

And so, the giant stomps his feet.

In just 56 days from May to July, the artillery sections at Camp Blessing conducted 252 firing missions &mdash; an average of 4.5 a day &mdash; unleashing 1,926 rounds. This surpassed the 1,729 rounds fired in the previous four months. If this pace continues, this year will go down as the heaviest artillery fight in the Pech valley since the war started.

It&rsquo;s a two-way fight. Insurgents often target the big guns when they launch their remote attacks on the base. Just when everyone else is running for cover to return fire, the artillery men and their fellow mortar men run out into the open to engage the enemy.

Two howitzers have been incapacitated in enemy attacks at Blessing, which like all the bases in the valley, is small. A single artillery section has been so hard hit that the section leader moved them to a safer base.

It&rsquo;s a similar story with mortar sections at each base. The men stand in a cluster around the gun directly in the rain of enemy fire as they drop the rounds into the tube and duck, plugging their ears as the tube fires.

When a recent incoming round hit too close to the mortar pit at Combat Outpost Michigan, video from a mortarman&rsquo;s helmet camera showed the men laughing and exclaiming, even as they continued to drop and duck.

&ldquo;We&rsquo;ve had a couple of close calls,&rdquo; said Spc. Matthew Perez, 25, from Stonewall, Texas, a mortar squad leader out of Combat Outpost Michigan, just a few miles east of Blessing along the Pech River.

&ldquo;We are still here,&rdquo; he added, noting that he absolutely loves his job.

On May 4, an insurgent mortar landed just feet from one of two howitzers at Blessing, wounding nine men in Spencer&rsquo;s artillery section. Three soldiers were badly hurt, with one taking shrapnel to the head, one losing his leg and another losing half of his stomach, Spencer said. The rest of the soldiers suffered lighter shrapnel wounds and were able to return to work.

The gun was also heavily damaged and had to be replaced until it could be repaired.

A month later, during a fight on June 4, an explosion rocked the new howitzer and again sent shrapnel flying at the artillery section.

A report on the incident concluded that it was so unlikely for a rocket to hit the muzzle directly, that the explosion must have been caused by a faulty artillery round. But the men who man the 155 believe a mortar round did hit just as they were firing. They believe that for the second time in 30 days, enemy fire hit their weapon.

&ldquo;The guys that returned to duty after the first attack got hit again,&rdquo; said Spencer, who is from Washington, D.C. &ldquo;The gun chief had shrapnel in his neck. Those who returned to duty a second time &mdash; I opted to send them to a less stressful place, a FOB that didn&rsquo;t get attacked as much.&rdquo;

With a second gun down, they brought back the original, repaired howitzer. The new artillery team were men from other bases in the area. All knew what had happened to Blessing&rsquo;s guns. They all volunteered.

&ldquo;Everyone raised their hand,&rdquo; said Staff Sgt. Patrick Bannon, 26, of Spring, Texas, who came to Blessing with five of his men from Forward Operating Base Wright in the neighboring Kunar River Valley. &ldquo;Only a few were chosen.&rdquo;

Only Spencer and Spc. Christopher Scott, 25, of Kankakee, Ill., remained from the original team.

Scott was out of the base when his section was hit May 4 and has yet to forgive himself for not being with his brothers.

&ldquo;I should have been here that day,&rdquo; he said. &ldquo;It&rsquo;s my job; what I joined the Army for.&rdquo;

&ldquo;A gun section is like a family,&rdquo; he added.

Scott was not hurt during the June 4 explosion, though he was right behind the gun. But he, and the others, say they are all much more wary of what used to just be ordinary Afghan life.

Down in the villages that cling to the feet of mountains across the valley, residents barely flinch when the guns go off. They till their fields, walk in open shoes down dirt roads and live in mud compounds, much like they did centuries ago. Only their vehicles and cell phones and the earth-tremor roar of the big guns speak to a more modern age.

&ldquo;The bad guys are shooting at (the Americans) and it lands on us,&rdquo; said Mohammad Rafik, a shopkeeper at the Kandagal Bazaar, just outside Michigan. &ldquo;It&rsquo;s the same when the Americans fire.&rdquo;

The mortar and artillery sections never meet the villagers. Their job is to defend the base against a faceless enemy whose fire comes at them from the mountainsides.

&ldquo;Unless the ... world goes upside down and they start running down the mountain at us, all we get to see is muzzle flashes,&rdquo; said Sgt. Joshua Hulburt, 23, a mortarman from Grand Ledge, Mich.