Troops strive to hold the line in Pech valley 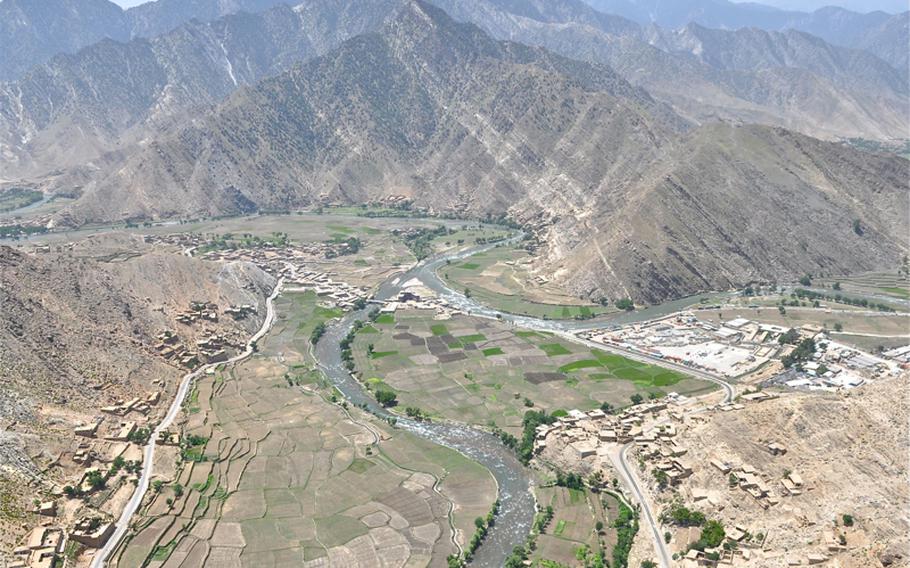 Forward Operating Base Blessing sits along the Pech River in the center of the river valley that traverses the troubled Kunar province in Afghanistan. (Dianna Cahn/Stars and Stripes)

Forward Operating Base Blessing sits along the Pech River in the center of the river valley that traverses the troubled Kunar province in Afghanistan. (Dianna Cahn/Stars and Stripes) 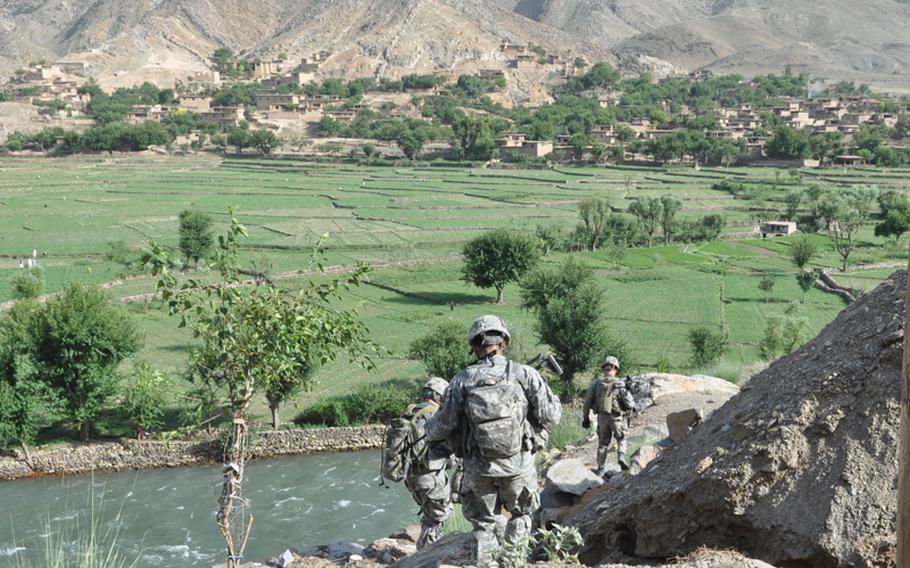 Soldiers with Company C, 1st Battalion, 327th Infantry Regiment climb down the mountainside to an overwatch position over the Pech River Valley during a visit on July 16 to the village of Qandaro. (Dianna Cahn/Stars and Stripes) 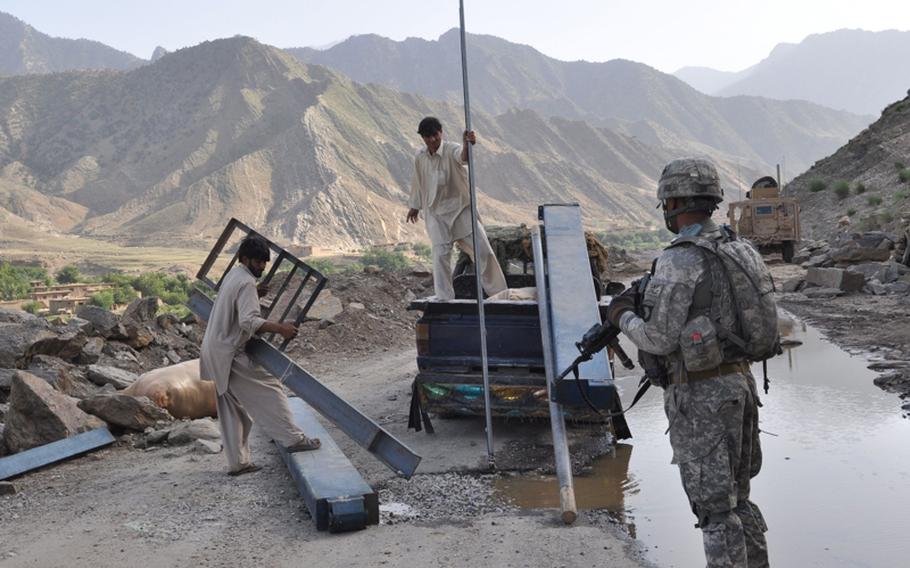 A soldier with the 327th Infantry Regiment watches as locals unload a delivery of building supplies to a home along the Pech River in Qandaro Village on July 16. (Dianna Cahn/Stars and Stripes) 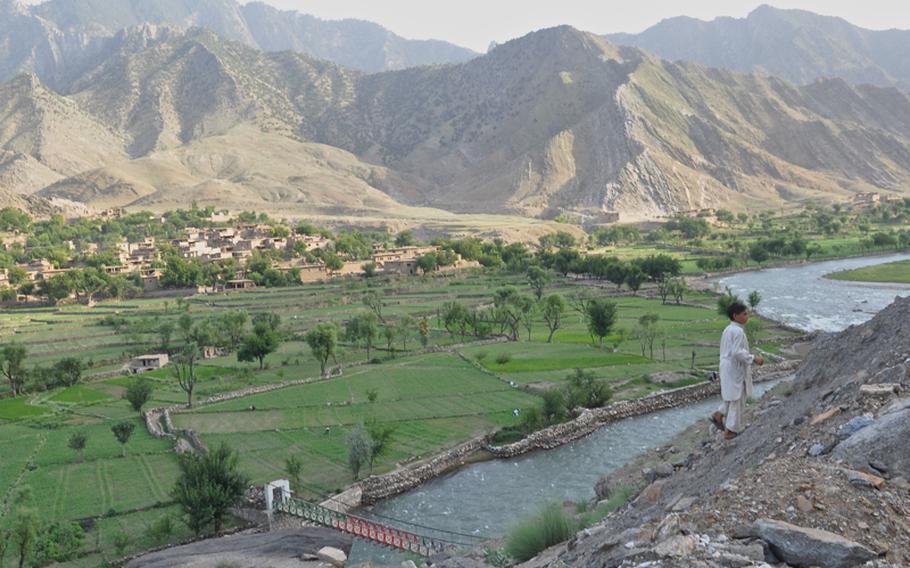 A child walks up from the valley along the Pech River in Kunar province to his home on the road above in Qandaro village on July 16. (Dianna Cahn/Stars and Stripes) 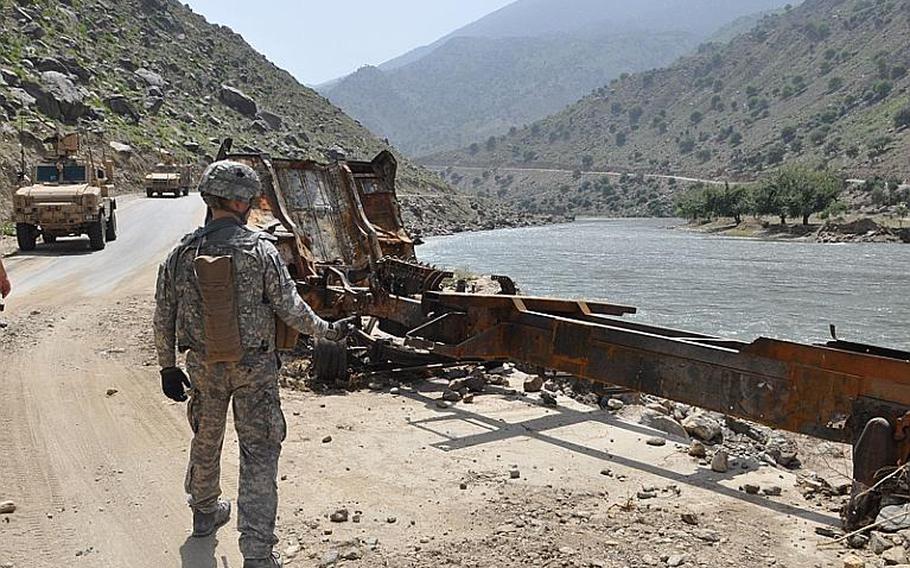 A soldier walks past the burned out shell of a supply truck on July 18 that was attacked along the Pech River Valley road right outside the abandoned Tarale police station. () 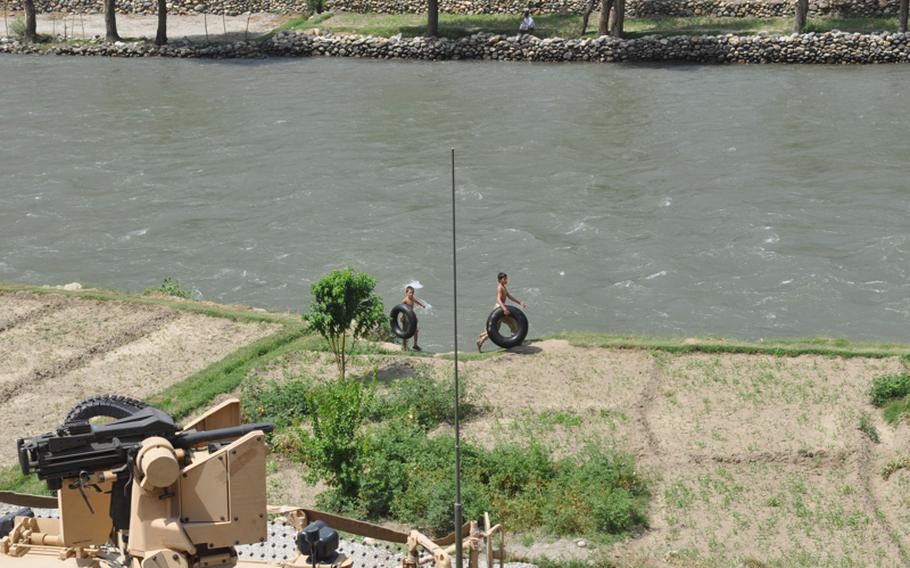 Children carry inner tubes along the Pech River on July 18 despite regular fighting nearby. (Dianna Cahn/Stars and Stripes) 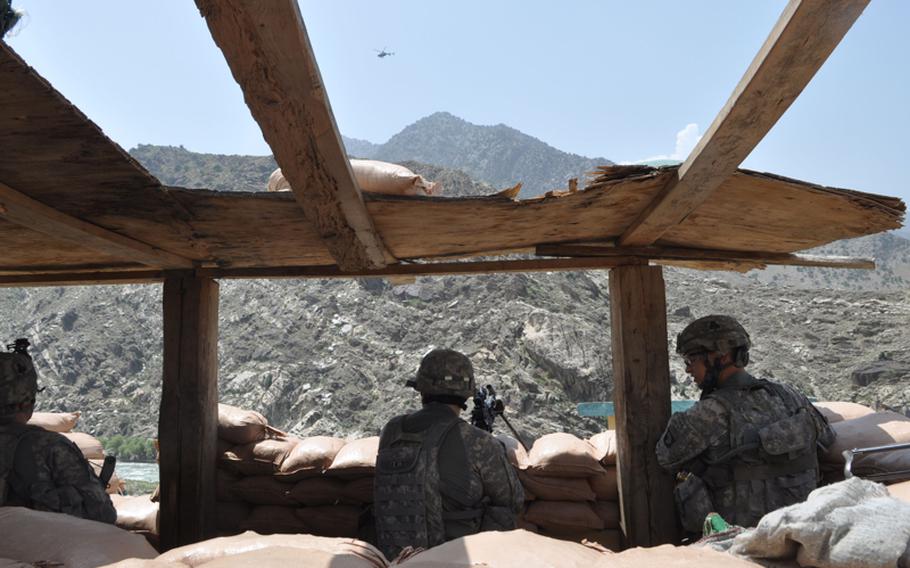 Soldiers take in the view at the guard post of the Afghan National Police station at Tantil Village in Pech River Valley of Kunar province during a visit on July 18. (Dianna Cahn/Stars and Stripes) 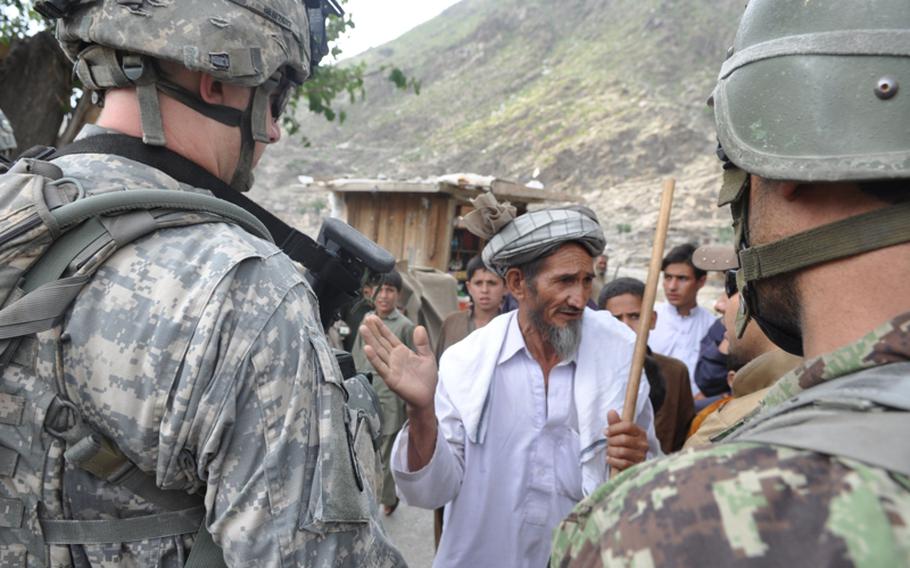 U.S and Afghan soldiers talk to a man at the Kandagal bazaar on July 20. The village is just across the Pech River from Combat Outpost Michigan. (Dianna Cahn/Stars and Stripes) 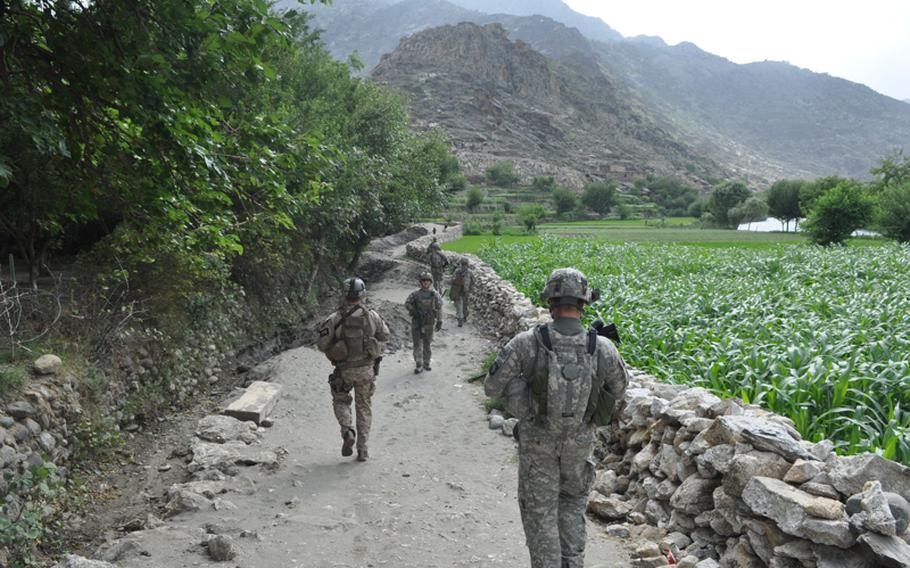 U.S. soldiers patrol the villages outside their base, Combat Outpost Michigan, on July 20, walking past tall-growing corn that soldiers have begun paying villagers not to grow. Insurgents hide amid the tall crops to shoot at Afghan and coalition forces. (Dianna Cahn/Stars and Stripes) 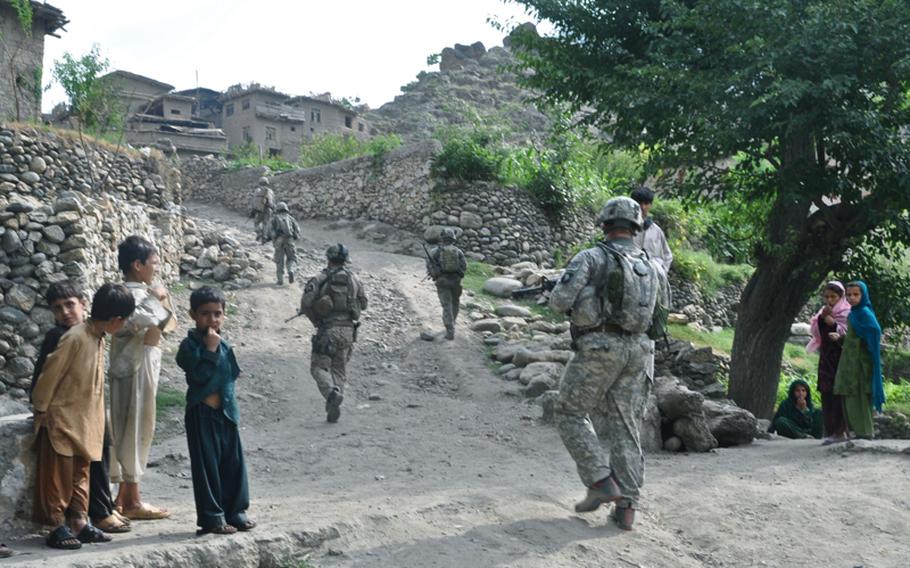 Soldiers walk through a village not far from their base, Combat Outpost Michigan, during a patrol on July 20. (Dianna Cahn/Stars and Stripes) 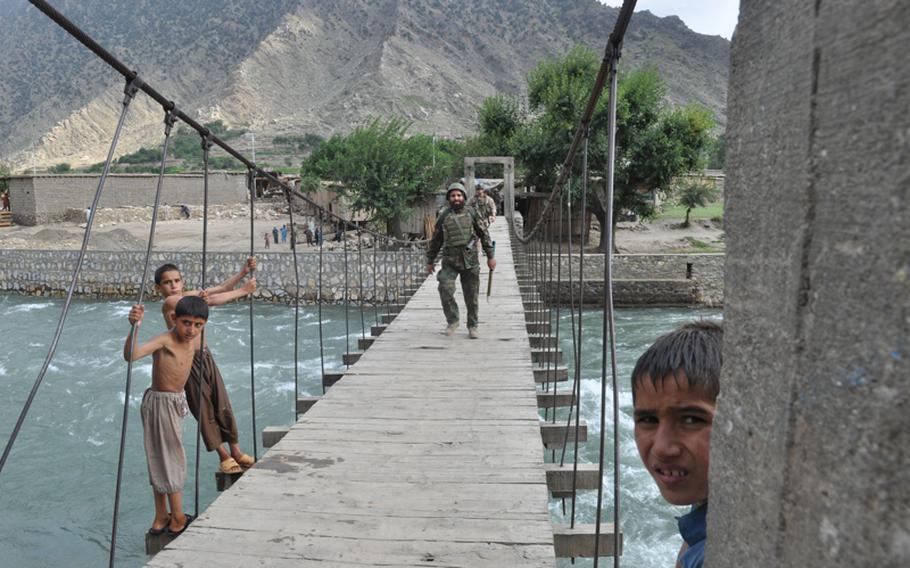 An Afghan National Army solider walks across the goat bridge over the Pech River, returning from a patrol to villages near Combat Outpost Michigan on July 20. () 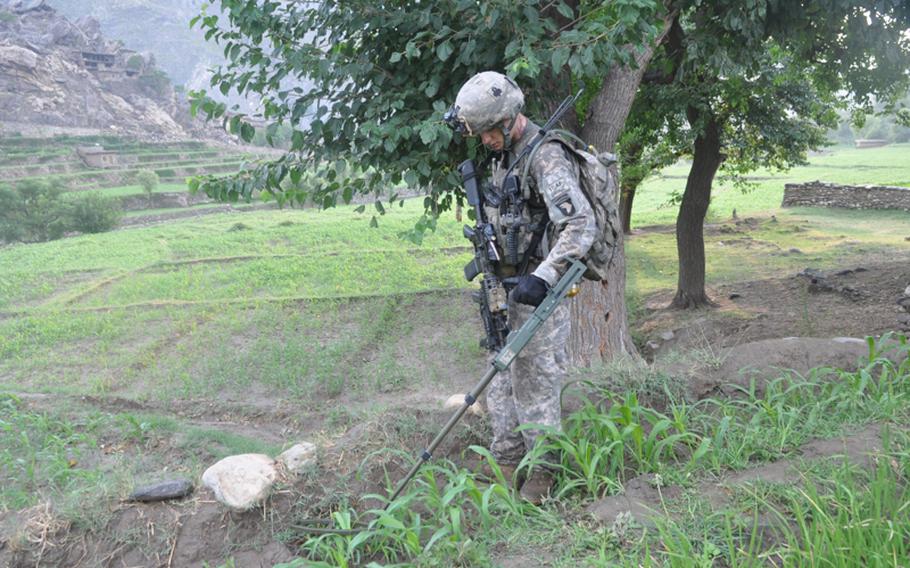 A soldier uses a metal detector on July 21 to search the fields of the hostile Chinar village at the mouth of the Korengal Valley for hidden weapons used to shoot at their outpost. (Dianna Cahn/Stars and Stripes) 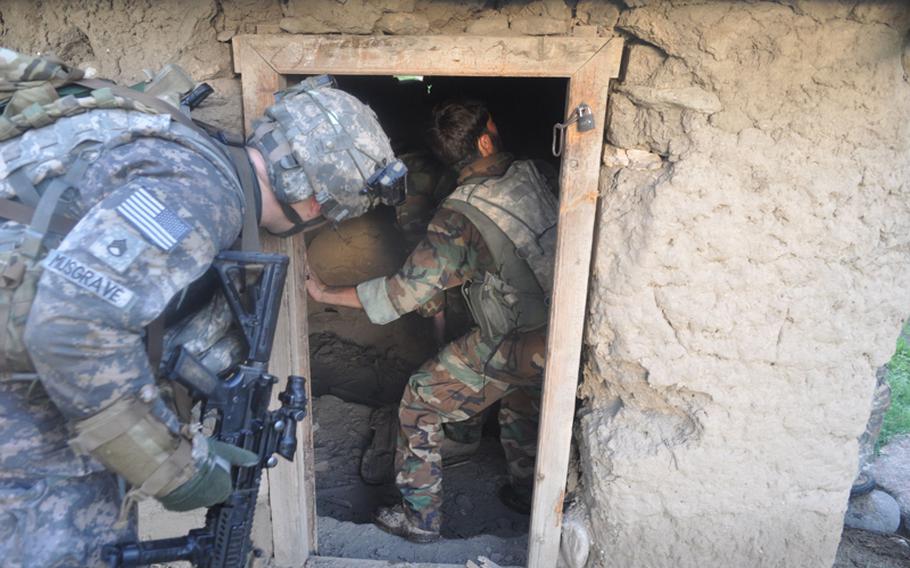 U.S. and Afghan soldiers search a field shack in Chinar village on July 21, looking for weapons used by insurgents to fire at their base from the village at the mouth of the Korengal Valley. (Dianna Cahn/Stars and Stripes) 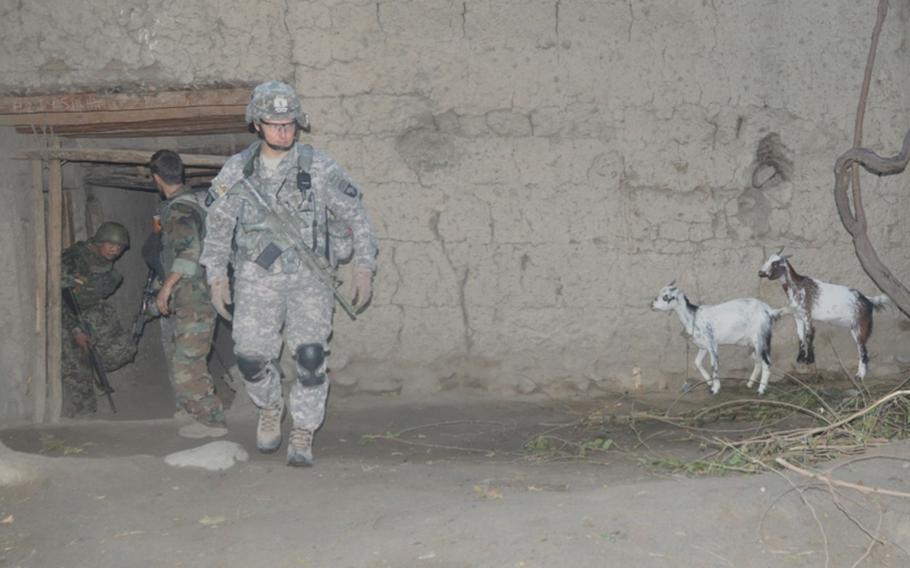 Lt. Col Joe Ryan, commander of the 1st Battalion, 327th Infantry Regiment, emerges from a compound where Afghan and U.S. forces searched for insurgent weapons during a dawn raid in the hostile Chinar village of Pech River Valley on July 21. (Dianna Cahn/Stars and Stripes) 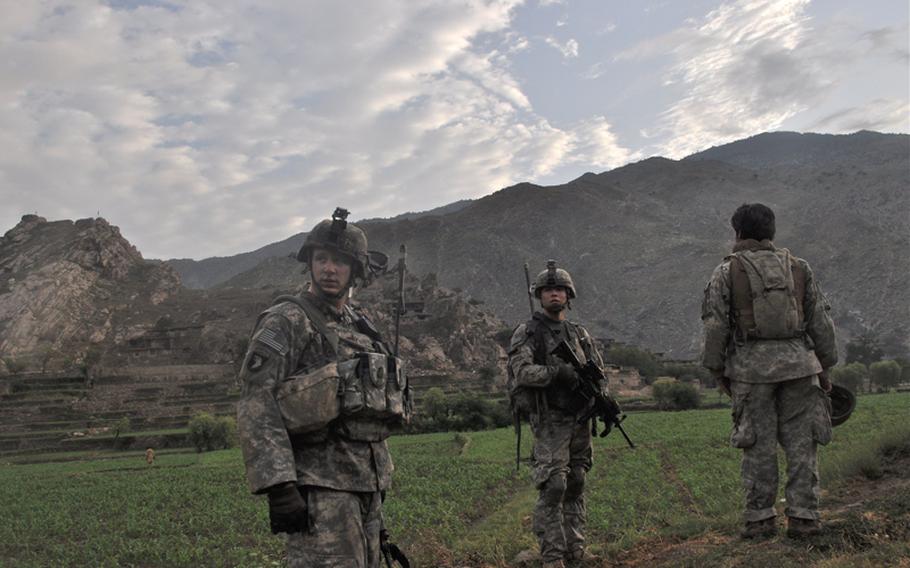 U.S. soldiers search fields in the hostile village of Chinar at the mouth of the Korengal Valley on July 21 for insurgent weapons. (Dianna Cahn/Stars and Stripes) 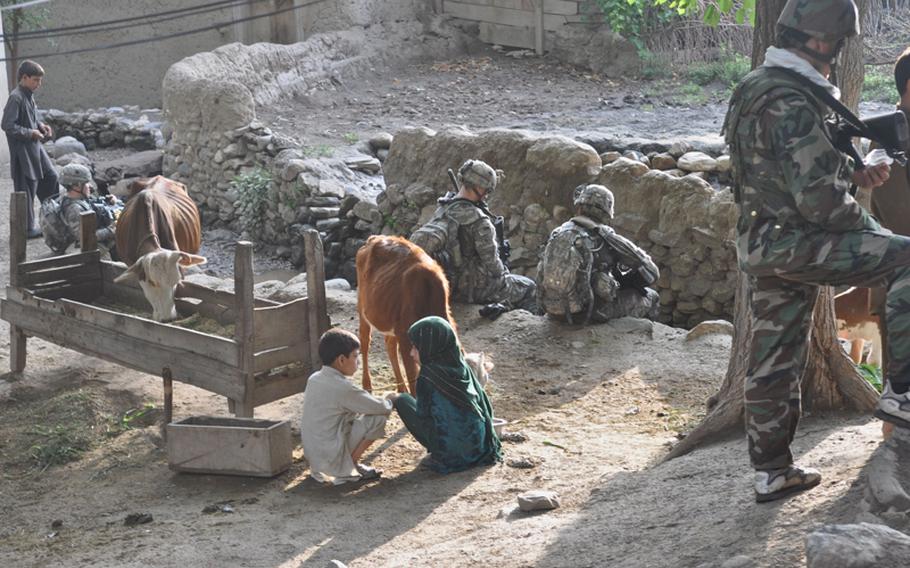 Young villagers in Kandagal, just across the Pech River from Combat Outpost Michigan, tend to their animals as U.S and Afghan soldiers rest for a few minutes at the end of a patrol on July 21. (Dianna Cahn/Stars and Stripes)

PECH RIVER VALLEY, Afghanistan &mdash; In this wild and outlaw region of rugged mountains, where fighting is a way of life, insurgents fire down onto U.S. bases dotting the river valley not from a single peak or ridgeline, but from two or three at a time.

American soldiers are in a complex and unrelenting battle in stunning but brutal terrain. Insurgents command the high ground, and counterinsurgency tactics employed elsewhere in the country are fruitless among an insular population that sees no benefit in central government.

Just six weeks before the 101st Division&rsquo;s 1st Battalion, 327th Infantry Regiment arrived in the Pech River Valley in late May, U.S. forces pulled out of the adjacent Korengal Valley, leaving it open to become what officers here describe as a new Taliban command and control center set up in the very base that U.S. forces abandoned.

Now American commanders are struggling to assess the value of trying to hold this isolated valley in the hostile Kunar province. Many wonder if it wouldn&rsquo;t be better to pull out of the Pech, too.

&ldquo;I ask myself the same question,&rdquo; said Maj. Gen. John Campbell, 101 Division commander of all Regional Command-East. &ldquo;I don&rsquo;t think the time is right. At some point, I have to figure out what we can sustain here.&rdquo;

Insurgents in the Pech are outgunned by the long reach of U.S. artillery, mortars at every base and air power that rattles the rigid mountainsides. But they have the terrain and the fear of the people, ensuring their complicity.

With limited resources, it is all troops here can do just to hold the ground they have.

&ldquo;We go into the mountains to take away their safe havens,&rdquo; said Sgt. 1st Class Kenneth Shriver, 33, a platoon leader from Grand Terrace, Calif. &ldquo;We go up, we clear them, then leave. And a day or two later, they go back up and attack us again, just to show us we can&rsquo;t hold the ground. But if we don&rsquo;t go into the mountains, then they attack us in the valleys.&rdquo;

Kunar province is notorious for its warrior and isolationist culture. Valleys often have no contact with each other but share the tendency to fight against any outsiders. An entire Soviet division lost a campaign here in the early 1980s.

Now, U.S. officers say the Taliban appears to be uniting once-discordant fighters under a single command in the Korengal. Foreign combatants are also coming in to bolster their efforts, said Capt. Chris Muller, 27, 1st Battalion intelligence officer from Cloverdale, Calif.

&ldquo;It&rsquo;s a different fight here,&rdquo; Muller said. &ldquo;The [counterinsurgency] strategy for the country is not the strategy here.&rdquo;

But in a region this complex, officers have a hard time agreeing on the significance of these developments.

Battalion commander Lt. Col. Joe Ryan says there might be some collaboration, but talk of a fully unified insurgent command is as much Taliban propaganda as reality. It&rsquo;s being monitored, he said, but he did not see an immediate threat.

&ldquo;I don&rsquo;t see a massing of fighters in Korengal,&rdquo; Ryan said. &ldquo;The groups and tribes each have their own agenda.&rdquo;

Meanwhile, the incessant fight has precluded the kind of counterinsurgency efforts being waged in other parts of Afghanistan &mdash; a focus on peace and development to win support of the population for the Afghan government.

&ldquo;In COIN, the enemy is the obstacle to the objective [the people],&rdquo; said Ryan, who served as a ranger in Kunar province in 2003. &ldquo;Not here. Here it is the enemy that is the objective.... I can&rsquo;t turn the people any more on my side.&rdquo;

In the Pech River Valley, the mission now is to &ldquo;keep these guys at bay by actively targeting senior Taliban commanders,&rdquo; Muller said.

Across the Pech, lines of operation form a complex and constantly changing matrix. Each valley is a different fight, each tribe a potential new band of warriors for Taliban and al-Qaida operatives to enlist. Fighter affiliations shift as frequently as the wind.

There are also tribal and ideological divides. The Pashtun Safi tribe is the dominant group in the region, but its many subtribes rarely unite.

Ideologically, many in Pech revere the homegrown Islamic Salafist movement, whose political leader is a former Guantanamo Bay inmate suspected by the Americans of terrorism ties, Muller said. Haji Sahib Rohulla Walkil is now running in the September national parliamentary elections as the Kunar representative.

The sum of these moving parts demonstrates the difficulties the Americans face in trying to tame the Pech River Valley.

&ldquo;Right now, the poor people are the middle ground,&rdquo; said 1st Lt. Duncan Walker, a Company A platoon commander based at Combat Outpost Able Main, east of COP Michigan. &ldquo;The Taliban pay people to shoot at us. Why can&rsquo;t we do the same?&rdquo;

Muller believes the way to restore equilibrium in the Pech River Valley now is to break apart newfound alliances, working one valley at a time.

&ldquo;The way forward in the Pech is to go backward,&rdquo; he said. &ldquo;Pech 2011 should be Pech 2001, completely factionalized with nobody in control.&rdquo;

In their first eight weeks on the ground, 1st Battalion suffered four combat deaths. Two men were killed in a June 25 attack on a convoy along the main road that runs along the Pech River. Another two were killed in separate rocket attacks on July 10 on two combat outposts along the valley.

Insurgents crawl the jagged mountainsides and hammer coalition forces from above, while their comrades hide in tall cornstalks along the valley roadside, firing rocket-propelled grenades, machine guns and assault rifles at American convoys, sometimes from just yards away.

Commanders here recognize they are not fighting to gain ground, but rather to simply hold it. Many officers said they were frustrated, but they were doing what they could with the resources they have.

&ldquo;They are finding a way just to push the rock forward,&rdquo; Ryan said.

Shriver, whose platoon is based out of Combat Outpost Michigan at the mouth of the Korengal Valley, said the men still try to keep civilians in focus, working with the elders and trying to build up the Afghan National Security Forces.

One effort is a new program to pay farmers not to grow the tall corn that insurgents can hide in. Soldiers working on the project plan to make the first payouts in late July, and will then wait to see if Taliban intimidation hampers their success.

Another is a push to strengthen the Afghan police so they can secure their own villages. Several officers said the new initiative to build local village security and neighborhood-watch-style programs was also a good option for such a fragmented region.

Yet that, too, is a long shot. The police are ill-equipped, undermanned and undertrained to tackle the veteran fighters of the Pech.

A year before U.S. forces left the Korengal, they pulled out of the bases of Wanat and Keating to the north in Nuristan. Both were the scenes of deadly attacks by insurgents.

&ldquo;The insurgents leading here saw us go out of Wanat, out of Keating, out of the Korengal,&rdquo; said Campbell, the RC-East commander. &ldquo;It emboldened them.&rdquo;

The base in Korengal was so remote that it took enormous air resources just to keep it supplied, while the men were regularly attacked.

Pulling forces back to COP Michigan brought the fight to the main road, where there is easier access and backup.

A July 2009 report by the Washington-based Institute for the Study of War called for the U.S. to pull out of not only the Korengal, but also the Pech, saying the posts were small and ineffective.

Some officials here argue that the buffer that the American forces have created in Pech is necessary to absorb the fight and keep it from spreading into the center of the country. The developments in Korengal could bolster their argument.

Still, many are wondering if anything can be achieved in the Pech River Valley and if U.S. manpower and resources would better serve in places where they can actually take root.

&ldquo;This is a hard one to crack,&rdquo; said Campbell. &ldquo;It&rsquo;s different from other places.&rdquo;