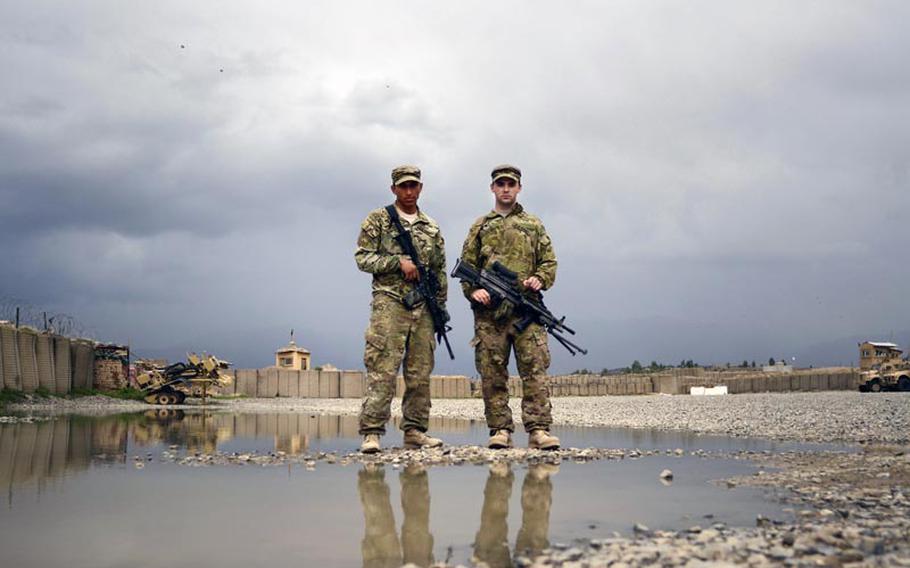 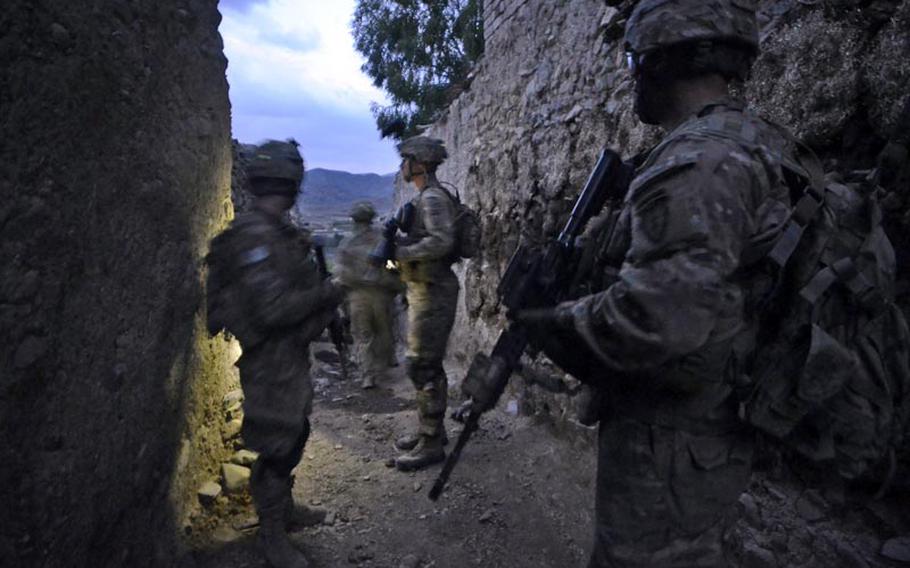 Soldiers with the 1st Battalion, 501st Infantry Regiment stand in the alley where Staff Sgt. Damian Remijio and Pfc. Zachary Fitch were wounded in an April 12, 2012, firefight in a village in Khost province. (Joshua L. DeMotts/Stars and Stripes) 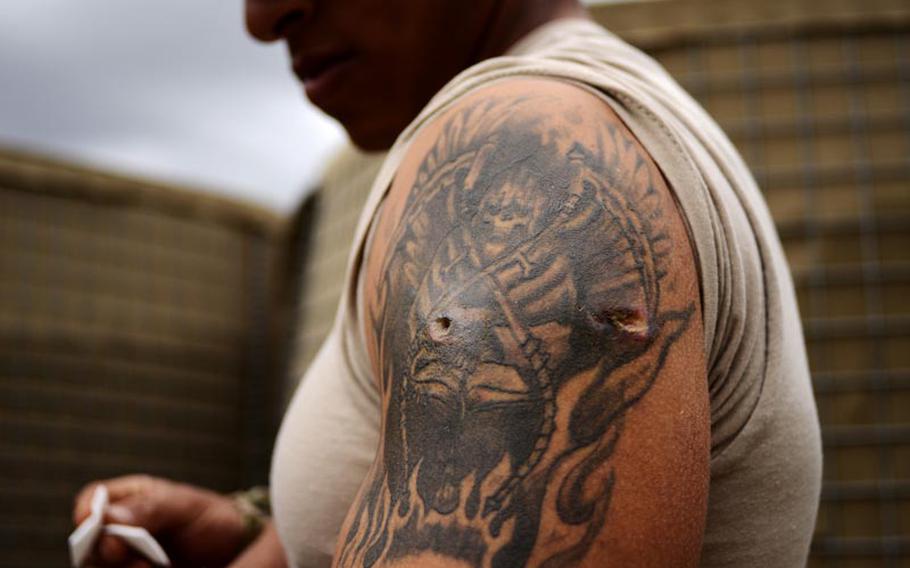 Staff Sgt. Damian Remijio shows the entry and exit wounds he sustained during a firefight with insurgents April 12, 2012. He was saved from further injury by the chest plate of his body armor, which stopped two bullets from an AK-47. (Joshua L. DeMotts/Stars and Stripes) 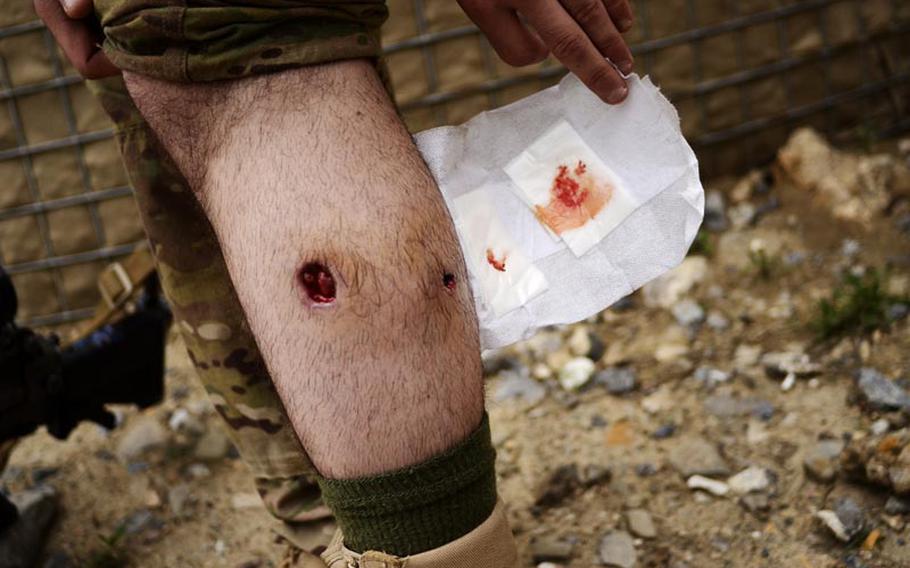 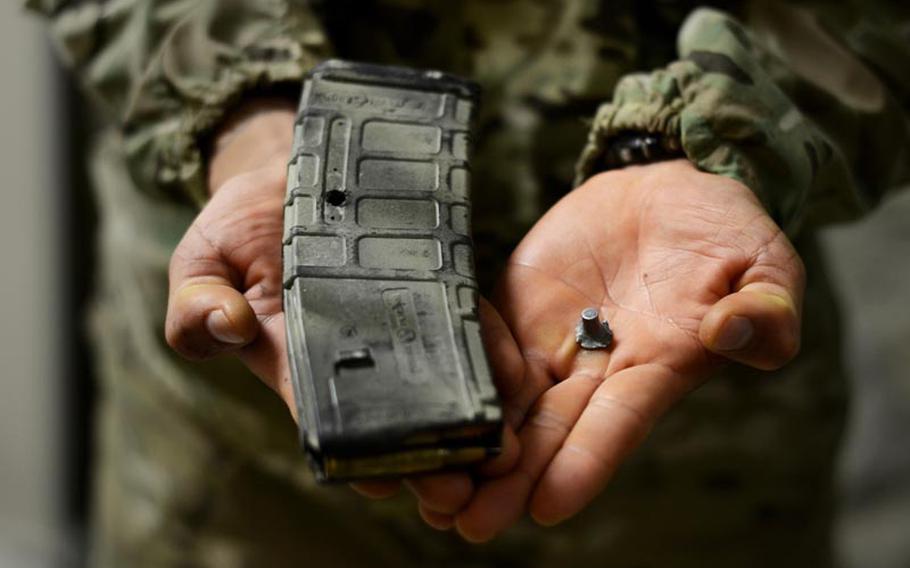 Staff Sgt. Damian Remijio holds one of the two slugs that struck his body armor and a magazine that he was carrying that was hit by a bullet when insurgents ambushed him and Pfc. Zachary Fitch in Khost province April 12, 2012. (Joshua L. DeMotts/Stars and Stripes) 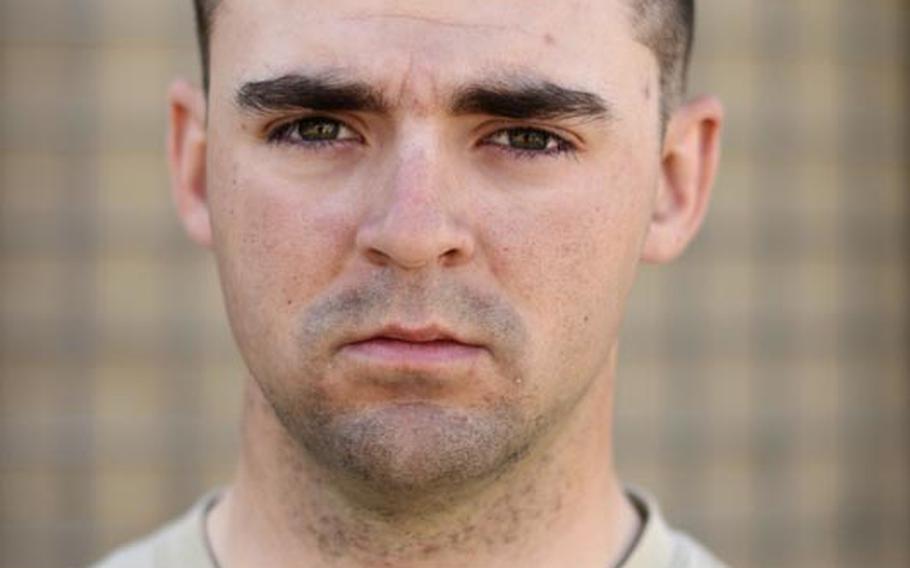 Pfc. Zachary Fitch, 20, of Lenexa, Kan., was shot in the leg and survived a grenade blast during a battle with insurgents April 12, 2012, in Khost province. (Joshua L. DeMotts/Stars and Stripes) 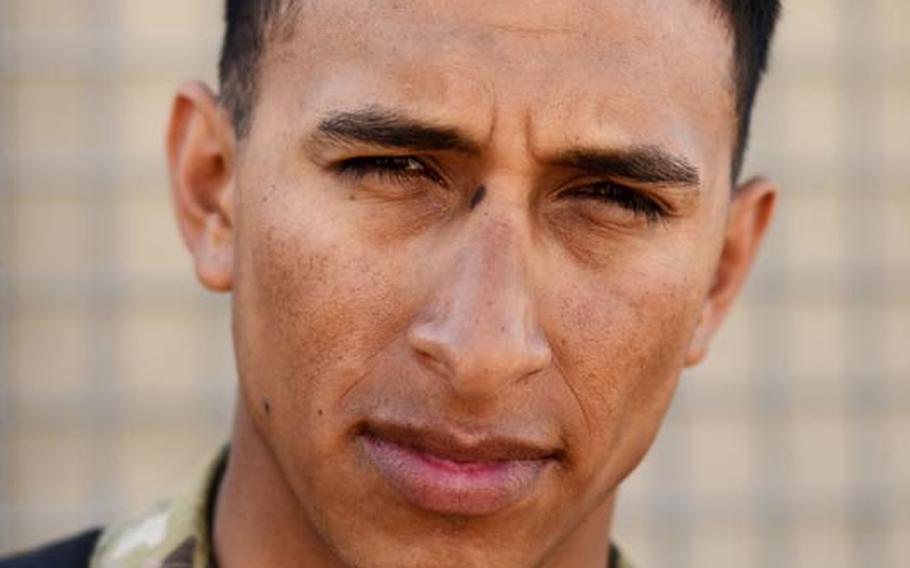 Staff Sgt. Damian Remijio, 26, of Chicago, was shot in the shoulder and survived a grenade blast during a battle with insurgents April 12, 2012, in Khost province. (Joshua L. DeMotts/Stars and Stripes)

MUCHAI KALAY, Afghanistan -- Staff Sgt. Damian Remijio and Spc. Zachary Fitch lay on the ground as a grenade bounced down a pile of rocks toward them. Metal struck stone with awful clarity.

Remijio spoke the words he believed would be his last.

The soldiers belong to Company D of the 1st Battalion, 501st Infantry Regiment stationed at Combat Outpost Sabari in eastern Khost province. Their platoon came under attack during a patrol April 12 near Muchai Kalay, a maze of mud-walled homes 15 miles from Pakistan.

Earlier that afternoon, a mortar round hit 100 feet outside COP Sabari, the fourth time in two weeks that militants had targeted the base. The artillery strikes suggested the so-called fighting season of the Taliban-led insurgency had arrived in a region dominated by the Haqqani network.

Command staff in the tactical operations center determined the mortar had been fired from the vicinity of Muchai Kalay. The U.S. platoon and one from the Afghan National Army drove three miles from the base to the village outskirts.

The soldiers climbed out of their armored trucks to search for the firing site in the dun-colored hills ringing the village. After 90 minutes, they had found nothing and headed back toward their vehicles parked beside a large wadi, or dry riverbed.

The wadi snakes through Muchai Kalay and several neighboring villages scattered across a wide valley whose scabbed, rock-strewn terrain is striped with lush farm fields nourished by the spring snowmelt. As the men walked, gunfire pelted down from high above, joined moments later by a sustained barrage from Muchai Kalay.

Bullets pocked the earth around them as they dived for cover. Gunners in the U.S. trucks sprayed the hills with fire from .50-caliber machine guns, buying time for the soldiers on the ground to start shooting. They took aim at the hidden attackers in the hills and what appeared to be two men in the village.

The firefight subsided after 20 minutes. Remijio, 26, of Chicago, coordinated a search for the gunmen in Muchai Kalay. The squad leader ordered three soldiers to circle around a cluster of buildings where the platoon had seen the assailants.

He and Fitch, 20, of Lenexa, Kan., approached the buildings from the opposite side. They stopped outside a dirt alley that runs between the remnants of a pair of roofless stone homes.

Remijio peeked around the corner. He spotted two bearded faces, partially obscured by a wall about 60 feet away, near one end of the alley.

The passageway is the width of a sidewalk. Remijio walked roughly halfway to the end. He looked behind him as Fitch rounded the corner.

He turned forward again. The two bearded men had stepped into the alley and stood within 30 feet of him. They opened fire with AK-47s.

His armored vest absorbed two shots to the chest. The impact punched him to the ground. He curled up, gasping for breath.

Fitch squeezed the trigger on his M249 machine gun. The 5.56-millimeter rounds chewed up the walls, spitting out divots of rock. The AK-47s continued to chatter. Doorways offered thin cover as he moved from side to side down the alley.

Bullets whirred above Remijio in both directions until three shots hit Fitch. Two thudded against his vest. The third ripped through his left calf, blood blackening his green camouflage pants. He collapsed to the dirt an arm&rsquo;s length from the fallen sergeant.

Remijio rose to his feet, his lungs straining for air. He lifted his M4 automatic rifle and peered through the scope.

The alley opens to a field that slopes downward beyond the crumbling buildings. The two attackers had retreated to a doorway on his left about 30 feet away.

One at a time, the men ran from the doorway, trying to slip out of the alley and behind the abandoned home on Remijio&rsquo;s right.

He missed the first man with two shots. One of his next two rounds struck the second man in the back above the kidneys. His body jerked, a bright red bloom soaking through his white tunic.

The man staggered forward. Before vanishing from view, he snapped his left arm sideways in a throwing motion.

Remijio didn&rsquo;t see the grenade. His reaction relied on instinct and experience.

He dropped down to wrap his body around the injured Fitch to protect him from shrapnel. The grenade landed amid a mound of rocks a few feet in front of them and tumbled in their direction.

He had heard the clinking of the grenade, but he was disoriented after being shot.

He struggled to pull free. Remijio hugged him tight. Their faces were almost touching.

He turned his head. The dark alley walls framed a strip of pale blue sky.

Fitch needed no help from above. He knew from the throbbing in his calf that he had lived.

The smoke cleared. Remijio untangled himself from Fitch. Only then did they notice a low stone wall, 2 feet high and half as thick, jutting several inches into the alley. The wall, perhaps the vestige of a corridor between the homes, had stopped the grenade and shielded them from the blast.

At least one of the attackers lingered after the explosion. He fired three shots. Remijio felt a slight burning in his upper left arm. A bullet had bored into the front and out the back.

He assumed it was nothing more than a graze. He radioed for help before dressing Fitch&rsquo;s leg wound.

Remijio looked closely at his wound for the first time. The sight of blood and shredded flesh beneath his torn shirt somehow sharpened the pain. He rolled off his knees and sat down.

Other members of the platoon arrived and began treating Fitch, whose injury was more severe.

An Afghan combat medic worked on Remijio&rsquo;s arm. Helicopters were en route to ferry the wounded men to Forward Operating Base Salerno, a 15-minute flight to the south.

The alley fight lasted 60 seconds at most, a span that cleaved each man&rsquo;s life in two. There is the time before walking into the alley, and all that happens after. In between is an everlasting minute.

Medics at FOB Salerno cleaned out Remijio&rsquo;s wound and swaddled his shoulder in padding. He lay in bed in the base hospital&rsquo;s intensive care unit waiting for Fitch to come out of surgery.

Remijio has soft, dark eyes and a lean frame hardened by weight lifting. A tattoo draping his right bicep that shows a pair of crosses testifies to his Catholic faith. A tattoo on his left arm of the Grim Reaper alludes to death&rsquo;s proximity in war.

Fitch, his boyish face topped with spiky black hair, talks at a pace that matches the rapid-fire bursts of the heavy machine gun he carries on patrol. His absence from the hospital room created a silence that cinched tight around Remijio.

The duo grew close in garrison in Anchorage, Alaska, where the 501st is stationed at Fort Richardson. Workout partners and video-game rivals, they share a bond rooted in the relentless banter of young men.

They deployed to Afghanistan with the 501st in December. Six years older than Fitch, who had never seen combat, Remijio served two tours in Iraq.

He felt accountable for the younger man&rsquo;s injury. It was a concern born not of guilt but of fraternal devotion. Fitch had risked his life to reach him in the alley.

Remijio dozed off. Sometime after midnight, he heard nurses help Fitch into the bed beside him.

They fell into their familiar repartee, joking about the firefight, threatening to punch one another&rsquo;s wounds. The room&rsquo;s silence dissolved in laughter.

Remijio returned to COP Sabari four days later. The mental aftershocks from the ambush had yet to recede.

Moments from the alley swirled in his mind. The bullets cutting the air as he lay on the ground after being shot in the chest. The fear in the eyes of the two bearded men. The seconds before the grenade blew.

His heart rate accelerated when the images invaded. The dread crept into dreams, fracturing his sleep.

Four days after rejoining his unit, eight days after he was wounded, Remijio went on a patrol with his platoon. Heavy rain poured from low clouds as their trucks rolled out of the base.

Sweat saturated the T-shirt under his uniform. He took deep breaths and sipped water from a plastic bottle.

He told himself he would not allow memories of the alley to paralyze him.

The anxiety waned as he focused on the work at hand. The patrol proved to be uneventful, and four hours later, the platoon drove back to the outpost. Remijio gave unspoken thanks. He had reclaimed a small piece of something lost inside.

Panic attacks still plague him. Sleep remains elusive. But the shooting inspired an epiphany, changing his perspective on the war and the Army.

His trauma has given him greater sympathy for the suffering of Afghans and, in turn, deepened his pride in the U.S. military for attempting to aid them. Before his injury, he intended to leave the service after his contract ends in two years. He now leans toward re-enlisting.

&ldquo;You want to make a difference,&rdquo; he said.

Fitch came back to COP Sabari last week. In the platoon&rsquo;s barracks, he ran into Remijio, who approached with his arms spread wide.

Fitch had no desire to re-enlist before he was shot. He has not reconsidered.

Like Remijio, he struggles with thoughts that flood in unbidden. Watching his friend fall to the ground and believing he might be dead. The pain that surged through him after the bullet pierced his leg. The blackness as the grenade detonated.

He thinks of the stone wall that absorbed the blast, appearing as the smoke dissipated as if willed into reality. &ldquo;It&rsquo;s why we&rsquo;re alive,&rdquo; Fitch said.

He is 20 years old. Death is no longer abstract.