An Afghan elder shows the soldiers where children sit on the floors next to the few desks that the school has. The soldiers promised that in addition to the building projects, they would supply desks and chairs. () 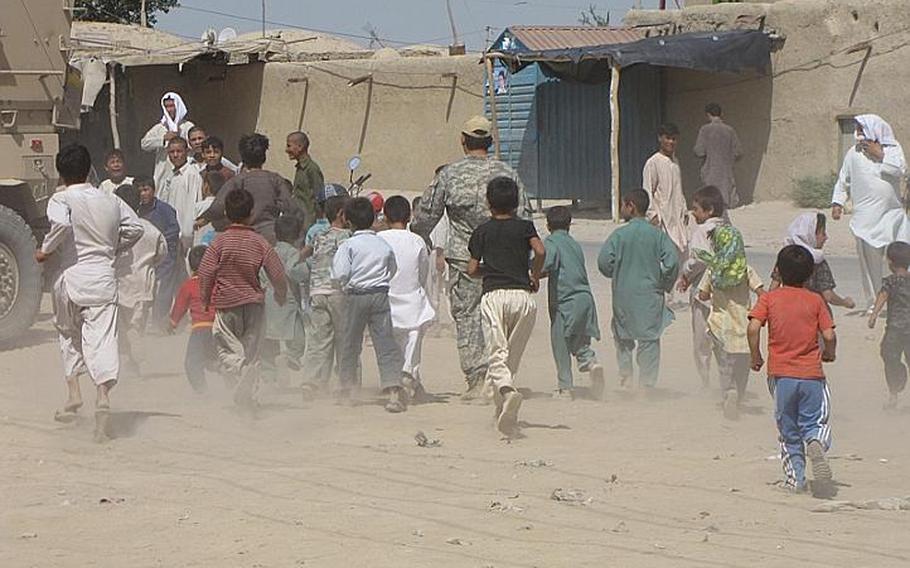 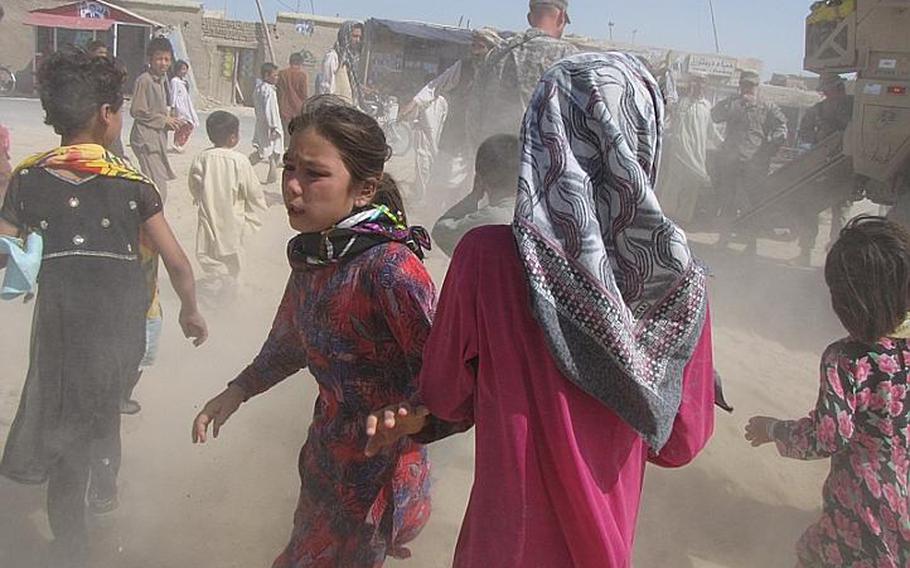 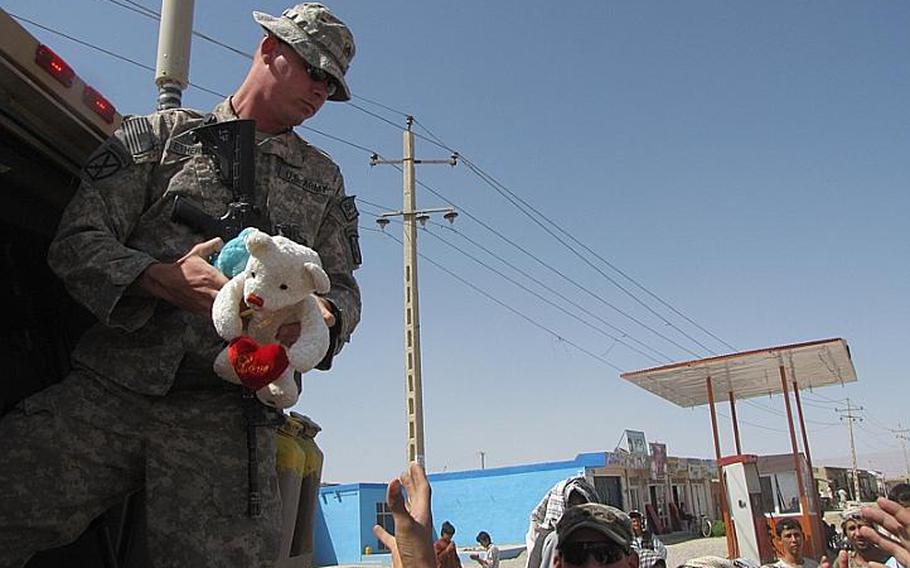 Sgt. Vernon Cole Etheridge starts to toss several toys the children of the village of Marjab. () 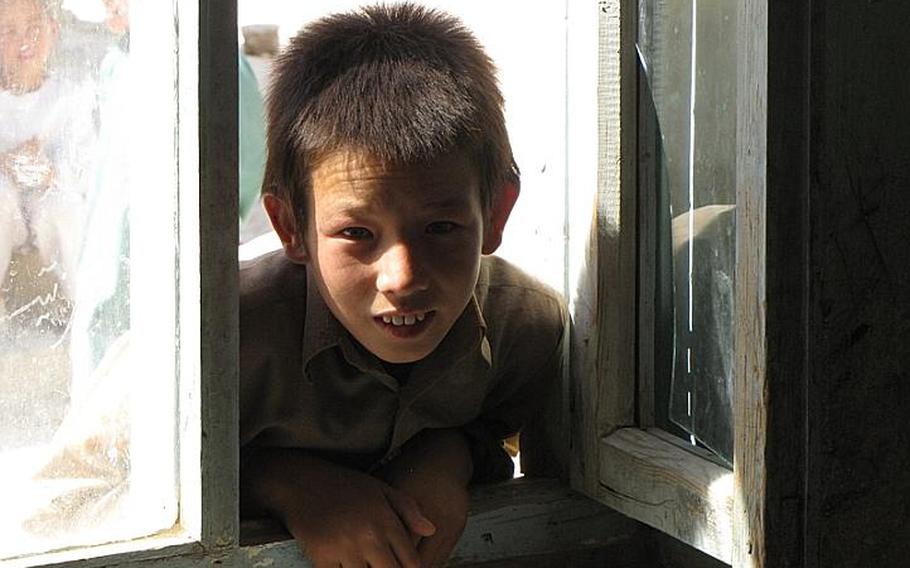 A young Marjab boy leans into a classroom window to listen as the soldiers and villagers discuss improvements. ()

MARJAB, Afghanistan &mdash; For one day, in one village, counterinsurgency efforts seemed to be working.

Blue Platoon from nearby Camp Spann in Balkh province rolled into dusty Marjab village on the southern edge of Mazar-e-Sharif on Monday. They came to hand out rice bought at a local market and toys for the kids. But they also brought news: Construction on new schoolrooms and drilling to remedy the village&rsquo;s briny well water would begin soon.

The area is secure enough for aid and construction. There have been no Taliban members for some time, so the unit has the luxury of shaking hands and making friends, with no body armor and no noticeable tension. Within 24 hours, elsewhere in northern Afghanistan, violence would erupt repeatedly. Six Afghan police were beheaded by insurgents at a checkpoint in Baghlan province on Tuesday, the same day an Afghan army trainer opened killed two U.S. contractors and an Afghan soldier at a firing range in Camp Shaheen.

But Monday in Marjab, safety was not a concern. Blue Platoon is a personal security detachment accompanying the colonel when he meets with key locals. But some noncomissioned officers, including Staff Sgt. Anthony Riggs, took it upon themselves during trips to the area to stop the trucks and talk to elders in Marjab. Soon they were meeting regularly, and trying to see what the locals needed.

On Monday, the team piled out of four Mine-Resistant Ambush-Protected vehicles &mdash; modified for Afghanistan&rsquo;s awful road system &mdash; and were promptly mobbed. But soon after soldiers started handing out food, word came that the village elders wanted to talk.

So the soldiers, with 1st Brigade, Special Troops Battalion, 10th Mountain Division, walked a short distance to the boys school. There, one of the elders, 45-year-old Zalmay Malik, brought up the urgent need to build.

This was all for emphasis. The soldiers had heard it before. Another weighed in.

It was indeed hot. One soldier estimated it was &ldquo;between 100 and &hellip; 200.&rdquo;

&ldquo;We are bringing a contractor next week to do an appraisal,&rdquo; said Sgt. Peter Walsh. &ldquo;We will do a boys school and a girls school. We will also redo the wells for both schools.&rdquo;

He promised that construction would start within a month.

The soldiers were paying a local engineer for an estimate. If they deemed it fair, they had $50,000 at their disposal for the engineer and the local contractors, who would in turn hire local laborers to perform the work.

The soldiers toured the modest buildings. An Afghan said 40 kids had to cram into the first room, about 12 feet by 14 feet. The exercise repeated itself, room to room; no space, blistering hot. But at least they were out of the sun, which beat down on those consigned to lessons in shredded tents flapping on their steel skeletons.

Everyone returned to the trucks to finish handing out what they&rsquo;d brought. When Sgt. Vernon Cole Etheridge emerged from the back of a vehicle with stuffed animals, the kids went nuts. Each toss set off a scrum, with the bigger kids having their way. One small child was reduced to tears when his stuffed lizard was ripped from his hands. He was consoled, but just barely, with a bystander&rsquo;s pen.

Finally, the soldiers went to Zalmay&rsquo;s house for some locally grown watermelon and more discussion. Zalmay spoke of his hopes for his young daughter, who was holding the hand of a female soldier. He joked that the specialist should take the young girl with her.

That was his nephew, the interpreter relayed. &ldquo;His father was killed by the Taliban. We hate the Taliban.&rdquo;

Then Zalmay thanked the soldiers for coming &ldquo;so far from your homes&rdquo; to help Afghanistan.

&ldquo;We hope we have peace and stability so you can return to your wives and families.&rdquo;