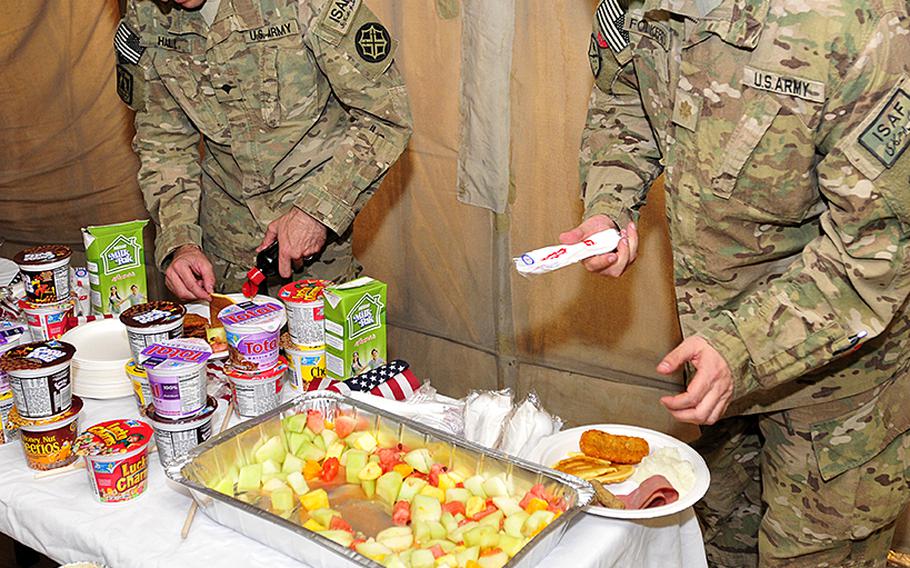 Soldiers grab a plate of food during a Fourth of July service with breakfast at Kandahar Airfield, Afghanistan, on July 8, 2012. ()

The drawdown in Afghanistan has soldiers in at least one province adjusting to new breakfast policies, and it&rsquo;s forced the Pentagon to work to set the record straight regarding suggestions that budget cuts have left troops deployed overseas without their morning meal.

A chain email has been circulating online, claiming that &ldquo;elected officials believe that our military who are deployed overseas don&rsquo;t have a need for breakfast anymore.&rdquo;

The rumor-busting website Snopes.com picked up the chain email, as well as statements from soldiers stationed in Afghanistan and their relatives. The site noted the email was &ldquo;partly true.&rdquo;

According to the Pentagon, all the troops are getting breakfast, just maybe not the one they&rsquo;ve been used to.

The Defense Department took to Twitter to clarify that some troops in Afghanistan&rsquo;s Paktika province are receiving Meals, Ready to Eat instead of hot breakfasts as U.S. forces prepared to pull out next year.

The decision by leaders in Paktika was based off a need to reduce logistics, not because of budget cuts, military officials said in a statement. &ldquo;We want to assure you that all soldiers are receiving four meals per day (if they want all four),&rdquo; the statement said. Making similar changes in other areas would be up to local commanders.

Hot breakfasts have been discontinued in some areas of Afghanistan to streamline logistics, according to the Defense Department, but officials were quick to note that MREs and often other cold food items like cereal and fruit are still provided.

&ldquo;Breakfast is an MRE, lunch and dinner are traditionally served hot meals, and the midnight meal is MRE,&rdquo; officials said. &ldquo;This has nothing to do with the national budget, and everything to do with our responsible reduction of forces.&rdquo;