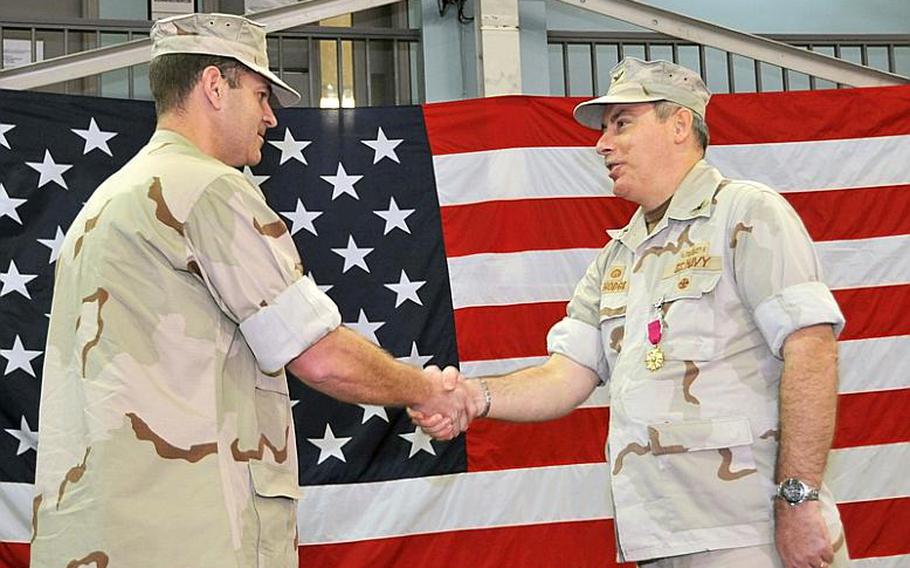 Capt. David Geisler, left, shakes hands with Capt. Donald Hodge after relieving him as Commander, Task Force 53 at a Jan. 9 ceremony in Muharraq, Bahrain. On Oct. 17, 2011, Geisler was relieved for loss of confidence in his ability to command. (Cynthia Z. De Leon/Courtesy of U.S. Navy)

For the 19th time this year, the Navy has fired a commanding officer.

Capt. David Geisler, who led the Bahrain-based Commander, Task Force 53, was relieved Monday for loss of confidence in his ability to command by Vice Adm. Mark Fox, head of Commander, U.S. Naval Forces Central Command, according to a Navy release.

An investigation into alleged inappropriate conduct is ongoing, according to the release.The second-in-command, Capt. Jesus Cantu, will lead CTF 53, which provides fuel and supplies to ships in 5th Fleet waters, until a new commander is announced, the release states.

Geisler assumed command of the unit on Jan. 9. He has been reassigned to duties at Naval Support Activity Bahrain pending the investigation, according to the Navy.A 1988 graduate of the University of Rochester in New York, Geisler was assigned to Joint Enabling Capabilities Command, where he directed planning support for Afghanistan and Haiti, before assuming command of CTF 53, according to a Navy release.

Originally of Bethel Park, Pa., he received his commission in 1988 and pinned on captain in 2009.