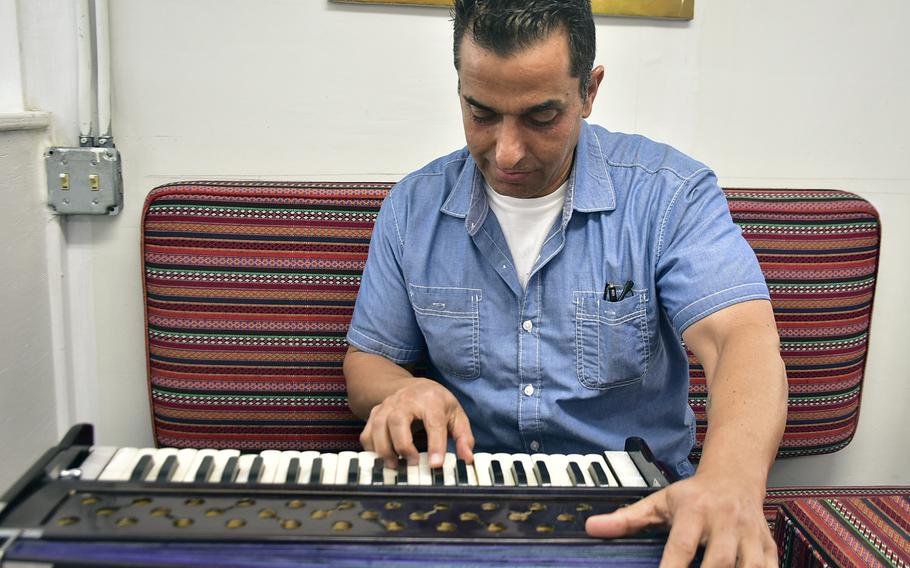 Jawid Kaderi, an Afghan-American contractor who works at Bagram Airfield, plays a traditional Afghan instrument, the harmonium, Sept. 19, 2019. Kaderi each week plays Afghan music to share his culture and history with troops on base. (J.P. Lawrence/Stars and Stripes)

Jawid Kaderi, an Afghan-American contractor who works at Bagram Airfield, plays a traditional Afghan instrument, the harmonium, Sept. 19, 2019. Kaderi each week plays Afghan music to share his culture and history with troops on base. (J.P. Lawrence/Stars and Stripes) 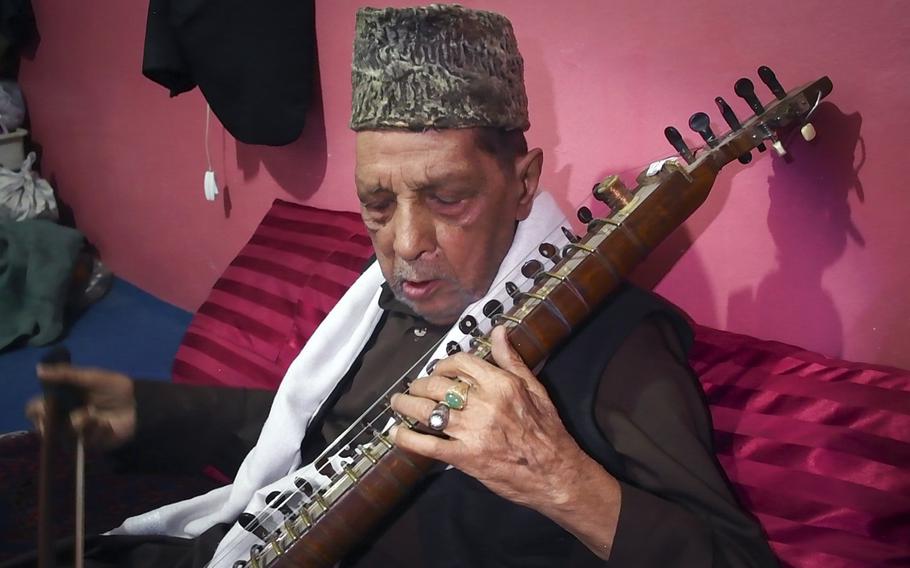 Ustad Amruddin plays a traditional Afghan instrument, the dilruba, at his home in the musician's quarter of Kabul, Afghanistan. Amruddin, 88, lived through the flourishing of music and the arts in Afghanistan in the 1950s, the banning of music under the Taliban and the return of musicians to the country after 2001. (J.P. Lawrence/Stars and Stripes) 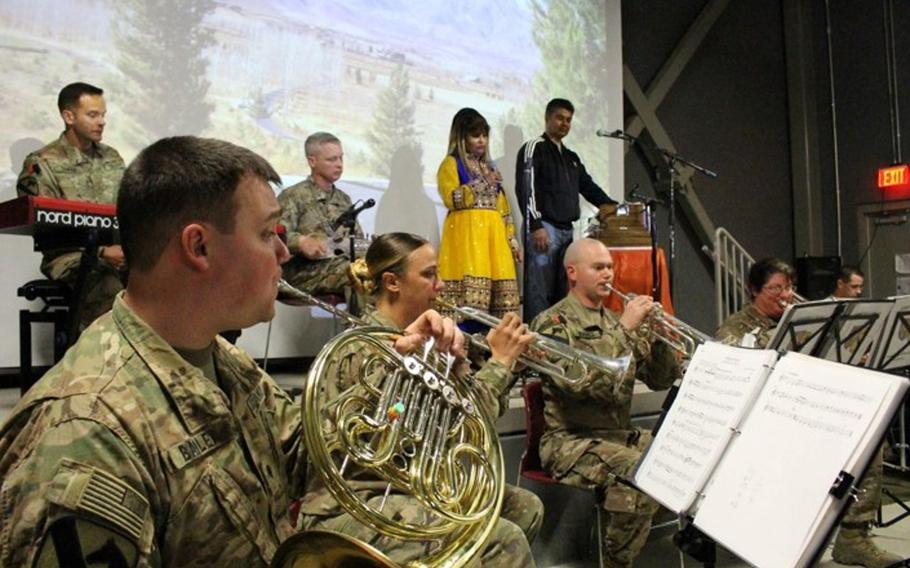 BAGRAM AIRFIELD, Afghanistan — Every Sunday night for the past two years, Jawid Kaderi has organized Afghan music nights in a recreation center on this expansive base to showcase an essential aspect of Afghan life that had been suppressed before the U.S.-led invasion 18 years ago.

American troops often dub the deafening roar of fighter jets taking off from the nearby flight line “the sound of freedom,” but in the small auditorium off the base’s Disney Drive where Kaderi and a rotating cast of three to four contract interpreters gather each week, the strains of the stringed rabab and the rhythmic beat of the tabla drums make for a humbler celebration of the concept.

Though sparsely attended, the events are open to American troops and others who Kaderi hopes will come to learn about his country’s traditions.

The nightlong jam sessions are also helping to rebuild “a musical culture that was nearly completely destroyed” under the Taliban, and which faces continuing challenges even now, said Capt. Philip D. Tappan, associate bandmaster of the United States Army Band.

The revival of musical traditions here is also something of a rebuke of the radicalism that has mired Afghanistan in decades of war, said Tappan, who studied Afghan culture before deploying to the country several years ago with the 1st Cavalry Division band and played alongside Afghan musicians at Bagram and in Kabul in 2017.

“If the work we did together provided any legitimacy to their programs and the musical arts in Afghanistan, then we have directly combated the extremism that has terrorized this country and the world at large,” he said.

The Taliban had denounced singing and dancing as a moral perversion. When they emerged as victors in the country’s fractious civil war in the 1990s, they burned instruments and ripped apart cassette tapes, outlawing music and other forms of pop culture under their hardline interpretation of Islamic law.

But just a few decades before the country was plunged into 40 years of war, including street battles that ravaged Kabul’s musicians’ quarter, artists like Ahmad Zahir — the “Afghan Elvis” — had flourished amid a “golden age” of music in the 1960s and 1970s, Kaderi said.

And after the militant regime fell in late 2001, it wasn’t long before song returned to the country’s capital, Kaderi said.

“Right after the Taliban were ousted by U.S. forces, the first thing that we saw on the streets of Kabul was the free people playing music, singing and dancing,” he said.

The U.S. and NATO have funded music programs in the years since, but just as efforts to establish lasting peace, security and prosperity here still face numerous challenges, so too does any musical renaissance. In rural areas still under Taliban influence, the militant group continues to bar it, locals have said, and musicians elsewhere in the country still face strong family pressure and even threats from violent extremists.

In 2014, for example, a suicide bomb attack targeted Ahmad Naser Sarmast, founder and musical director of the Afghanistan National Institute of Music. The Taliban claimed the attack, which took place at a high school, and said Sarmast was corrupting Afghanistan’s youth.

Samast lost his hearing in both ears, and for three or four months afterward it felt like there was a “full symphony orchestra in my head, playing out of tune,” he said recently.

Now Sarmast is slowly regaining his hearing and continues teaching young people. However, an entire generation of other would-be teachers or mentors was silenced by death, oppression or exile, said Kabul University music professor Mohsen Saify, and Afghan women are still often discouraged from even studying music by family members who hold that it’s immoral.

At Bagram, however, Kaderi believes that sharing a love of music is a deep part of the country’s culture and a reason to continue to celebrate the Taliban’s ouster.

“You cannot take away music from Afghan people,” he said. “Even during their fighting with their enemies, they sing and dance.”

Capt. Eveleen Soroko has attended some of the music nights and said that even though she didn’t understand all of the words, she enjoyed the music’s poetry.

“I can feel in the music that the culture is alive, and that the history has a beautiful depth to offer,” she said.

The Bagram events are also a way for fellow musicians like Kaderi and Tappan to build camaraderie.

“I have not forgotten about Afghan music, the experiences I’ve had with Afghan musicians or the study of Afghan music,” Tappan said. “It will continually color my life.”