Austin to take command in Iraq at critical time 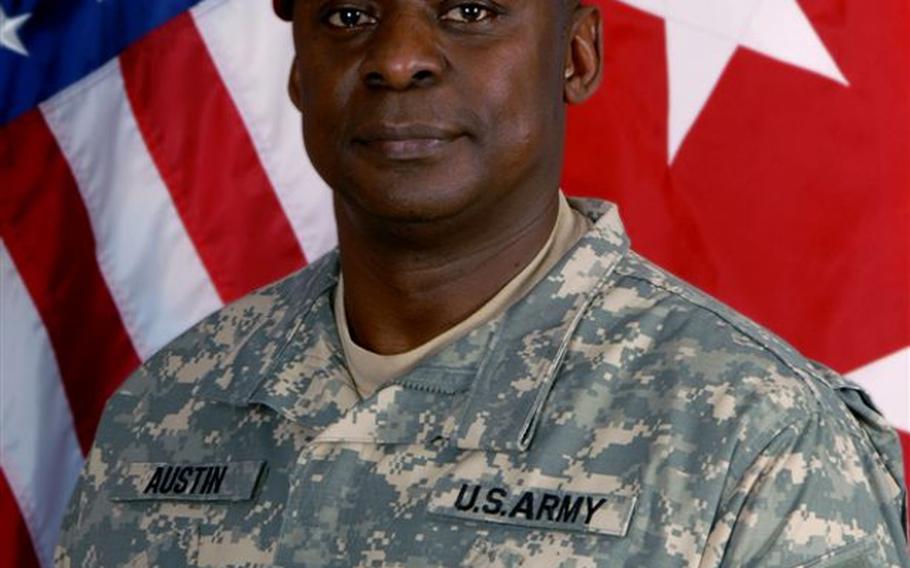 President Obama has nominated Gen. Lloyd J. Austin III to be the Army's No. 2 general, the vice chief of staff, the Pentagon announced Friday. (U.S. Army)

BAGHDAD &mdash; Beginning in September, the war in Iraq will have a new name, a new commander and a new mission, one that will prove the biggest test yet for Iraqi forces while changing some 50,000 U.S. troops from warriors to advisers.

Operation New Dawn marks the end of U.S.-led combat operations in Iraq. The optimistic new name comes at a time when violent factions are targeting Iraq security forces and the Iraqi government remains in a six-month stalemate that undermines the country&rsquo;s ability to move toward rebuilding its nation and defending its borders.

Into this critical juncture comes Gen. Lloyd Austin III, a West Point graduate with a graduate degree in education, a paratrooper who has jumped while wearing three stars, and a former corps commander in Iraq who led the ending months of the surge.

With the 2011 deadline for full U.S. withdrawal looming, Austin must balance his job of bolstering Iraq&rsquo;s ability to bring law and order to the still-chaotic nation while protecting the U.S. troops who remain as advisers.

&ldquo;Security of our forces is foremost in my mind,&rdquo; Austin, who will assume the top military spot in Iraq during a change of command ceremony Wednesday at Victory Base Complex, said earlier this summer at his confirmation hearing before the U.S. Senate Armed Services Committee.

Austin, scheduled to be promoted to a four-star general the same day, follows Gen. Ray Odierno, who has spent 56 months here and in the past two years has become the public face &mdash; in Iraq, in Congress, and even on &ldquo;The Colbert Report&rdquo; &mdash; of the seven-year war.

This is the second time Austin has taken over Odierno&rsquo;s duties in Iraq. In 2008, Austin took the No. 2 military job as head of Multi-National Corps - Iraq from Odierno, who at the same time moved into the No. 1 job that he leaves now.

As corps commander, Austin was given great credit for saving an Iraqi-led effort in 2008 to chase insurgents out of Basra in an operation known as Charge of the Knights.

&ldquo;We served together during some pretty tough times during Charge of the Knights,&rdquo; said Lt. Gen. Michael Barbero, who was Austin&rsquo;s operations officer in Iraq at the time. &ldquo;So we worked very closely. More importantly, the Iraqis have served with him. And they know him.&rdquo;

Austin will inherit the role of lead adviser to the Iraqi security forces, 660,000 troops and police who still need training to try to stem the bombings and assassinations that plague the country in addition to worrying about external threats, for which they are badly under-equipped.

At the same time, he must orchestrate the U.S. military&rsquo;s impending exit from Iraq, a move that comes with peril as well.

&ldquo;The fact is, the fewer soldiers we have, the more opportunity the bad guys have to come after us,&rdquo; said U.S. Sen. Saxby Chambliss, R-Ga., a member of the Senate Armed Services Committee who has known Austin for a decade.

&ldquo;Bad guys&rdquo; outside the country are watching as well, worrying experts.

&ldquo;A lot of people see Iraq as a weak state that they hope will pull itself together,&rdquo; said Steve Clemons, who directs the American Strategy Program at the New America Foundation, a Washington think tank.

But the country remains a prime target for a tug of war among neighboring states, including Iran and Turkey, Clemons said.

Now, Austin is the face of those struggles. While he&rsquo;s had key leadership positions &mdash; commanding the 10th Mountain Division, working as chief of staff for U.S. Central Command, and most recently serving as the top assistant to Adm. Mike Mullen, chairman of the Joint Chiefs of Staff &ndash; this job will put him in a new spotlight. his brightest spotlight yet.

&ldquo;He is kind of a quiet guy,&rdquo; said Chambliss, who lives 25 miles from Austin&rsquo;s hometown in Georgia and whose son shared the same high-school football coach as Austin. &ldquo;But his leadership is not quiet.&rdquo;