As more U.S. troops die in Iraq, end of the mission there remains unclear 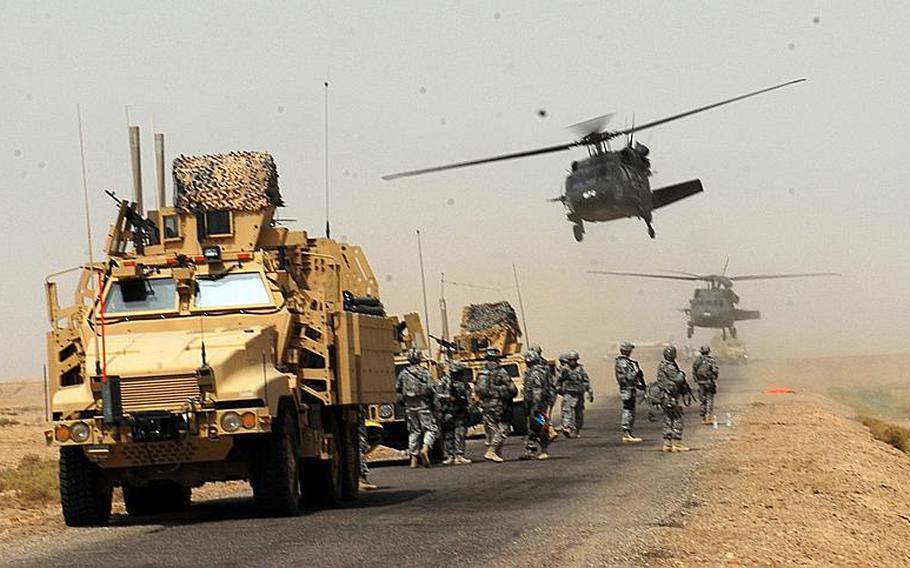 Soldiers from the 17th Fires Brigade and 2nd Brigade Combat Team, 4th Infantry Division arrive by air and convoy to assist the Iraqi Army provide urgent humanitarian assistance to the citizens of Faddaqhryah and Bahar in Basra Province. (Spc. Maurice A. Galloway/U.S. Army)

WASHINGTON &mdash; U.S. officials say there is no sign Iraqi leaders are closer to asking Americans to extend their stay beyond Dec. 31, even as Monday&rsquo;s triple rocket attack that killed five U.S. soldiers in Baghdad punctuated a recent increase in violence.

&ldquo;I couldn&rsquo;t tell you the internal state of deliberations in the Iraqi government, but we have not gotten that request,&rdquo; Col. David Lapan, a Pentagon spokesman, said Monday.

With the deadline less than seven months away, 46,000 U.S. troops advising Iraqi Security Forces and hoping to be home by New Year&rsquo;s Day are left waiting for politics in Baghdad and Washington to determine their fate.

&ldquo;There is sufficient flexibility in the plan should a request emerge from the Iraqis, but that flexibility diminishes over time,&rdquo; a senior defense official told Stars and Stripes on Monday.

Last month, Iraqi Prime Minister Nouri al-Maliki said he would decide by August whether to support a U.S. extension if a majority in parliament agreed. But it would require he break from some of the supporters who kept him in power after last year&rsquo;s elections. With no Iraqi defense or interior minister yet appointed to facilitate any security recommendations to parliament, it&rsquo;s unclear how that recommendation process would play out.

&ldquo;I don&rsquo;t think the Iraqis are any closer to asking for an extension,&rdquo; said retired Army Col. Peter Mansoor, who served as Gen. David Petraeus&rsquo; executive officer in Iraq and is now a professor of military history at Ohio State University.

Mansoor sees little confidence in Washington that Iraqis will come together in time.

The U.S. needs about two months to complete a total withdrawal of bases and equipment, Mansoor estimated. By the end of October, if no request has come, he said, &ldquo;then I think we&rsquo;re into the final stages of the termination of the mission.&rdquo;

Convincing Iraqis to let Americans stay, he said, may require the U.S. to complete the pullout, then wait for Iraqis to realize they need additional security assistance, before asking Americans to return in limited roles.

That idea may give U.S. logisticians headaches, but it highlights the uncertainty permeating the increasingly dangerous final months of the eight-year mission, during which 4,459 American troops have died, according to iCasualties.org.

Until recently, Shiite militias this year have targeted mostly Iraqi government centers and hospitals. While some attacks also have targeted Americans at outposts in southern Iraq and elsewhere, none have been as brazen as Monday&rsquo;s truck-mounted direct assault on the joint U.S.-Iraqi Forward Operating Base Loyalty, near Baghdad&rsquo;s Sadr City.

&ldquo;We do still have violent actions, or violent activities through the country, and sometimes they&rsquo;re very heinous,&rdquo; said USFI spokesman Maj. Gen. Jeffrey Buchanan in a May 27 conference call with reporters. &ldquo;But overall when you look at them in the context of where we&rsquo;ve been in recent years, the trends are very, very positive.&rdquo;

Yet on Monday, in addition to the U.S. troops killed 13 Iraqis died in a suicide car bombing in Tikrit. On Friday, 19 people were killed there when suicide bombers hit a mosque and then detonated another explosion in the hospital treating the victims. On May 19, a triple bombing at a Kirkuk police station killed 27 more, following five roadside bombings there in the previous 10 days. Police also have been attacked in Mosul.

Buchanan identified the three biggest threats in Iraq as al-Qaida and terrorists; militias and their illegal arms; and crime. Yet, most military assistance the U.S. suggests could help to Iraq&rsquo;s 200,000 defense ministry forces and 450,000 interior ministry forces is largely aimed at external threats.

If more attacks come, it could become harder for al-Maliki to plead for American help and for President Barack Obama to break his campaign promise to bring troops home.

&ldquo;On both sides, the politics are pretty dicey for an extension,&rdquo; Mansoor said. &ldquo;The cost of the mission plus the occasional casualty, as we saw today, and the lack of support in Iraq coupled with the lack of support among the American people make this pretty problematical. Even if, strategically, it makes sense to stay.&rdquo;

Privately, some Pentagon officials also believe Iraq&rsquo;s request will come at the last minute. Meanwhile, they are trying to determine what Iraqis need, what Iraqi laws allow, and what the U.S. wants to happen.

Another defense official not authorized to speak on the record said the Pentagon believed many Iraqis had been worried that U.S. forces would leave without a long-term security commitment. But Iraqi politicians could not ask the U.S. to stay and risk looking weak or suffer political embarrassment if Obama said no. Thus, wanting to give Iraqi leaders the political cover they need, Gates began the public campaign for an Iraqi request.

The strategy risked putting Iraq on the defensive, but al-Maliki has changed his rhetoric in nes conferences, the official noted, by acknowledging more U.S. training could help Iraqi forces.

Now the Pentagon feels the ball is in al-Maliki&rsquo;s court to convince Iraqi politicians to break their promises to voters opposing the U.S. presence. Only Iraq&rsquo;s parliament can legally approve an extension, so al-Maliki needs supporters of his rival, secularist former Prime Minister Ayad Allawi, and Kurdish representatives of thousands of peshmurga forces.

While radical cleric Muqtada al-Sadr supported al-Maliki&rsquo;s government last year, he opposes a U.S. extension and rallied thousands of supporters into Baghdad streets two weeks ago vowing he would restart his Mahdi Army if necessary.

Technically, al-Maliki can sign some type of extension alone, Pentagon officials believe. But that move would skirt an earlier agreement allowing Allawi to choose the defense minister.

Pentagon officials now are waiting for Iraq&rsquo;s internal security review. It could be their last best shot, the official said. If the review calls for U.S help but does not produce a consensus or result in a formal request of Washington, it could truly mean the end for U.S. troops in Iraq.