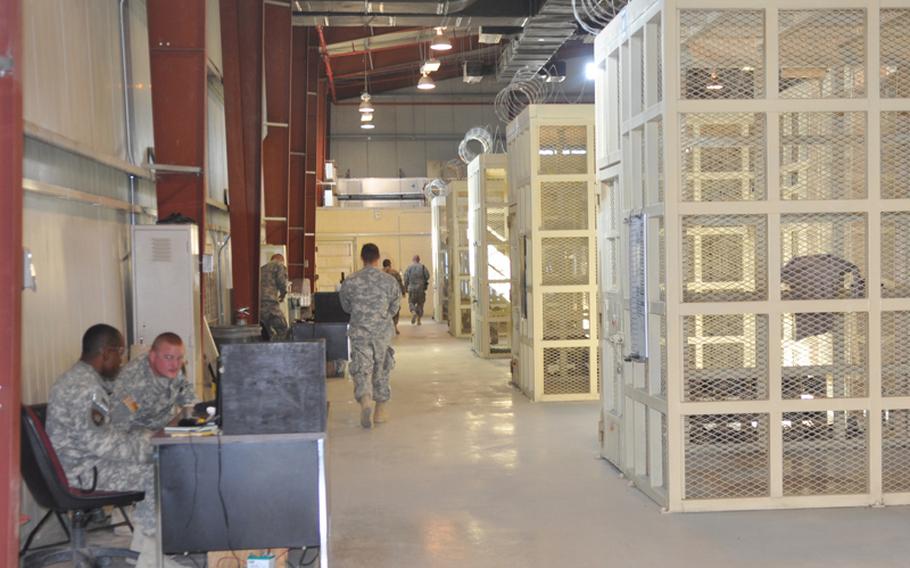 Buy Photo
U.S. soldiers serving as prison wardens sit outside the caged cells where Afghan detainees are held at the U.S. Detention Center in Parwan on Nov. 24, 2010. (Dianna Cahn/Stars and Stripes)

&ldquo;No foreigners have the right to run prisons and detain Afghan nationals in Afghanistan,&rdquo; according to the statement.

The decree stems in part from a spat between Afghan President Hamid Karzai and the United Kingdom, whose defense minister said detainees captured by British forces cannot be handed over to Afghan authorities because of fears of ill treatment. Karzai&rsquo;s statement specifically referenced the dispute and promised to transfer any remaining British prisons to Afghan control.

It is unclear whether the decree carries the force of law and Karzai&rsquo;s office did not immediately respond to a Stars and Stripes request for comment.

Control over prisoners has also been a long-simmering issue between the U.S. and Karzai, who has criticized the American military for the slow pace of their handover of detainees to Afghan authorities, since Washington signed a memorandum of understanding in March agreeing to turn over Parwan prison to Afghan authorities within six months. The U.S. subsequently missed the deadline and had to negotiate an extension.

In September, the U.S. handed over control of Parwan prison, a major detention center on Bagram Airfield. But Karzai has publicly criticized the U.S. for continuing to hold a number of prisoners, including Afghans.

Two weeks ago, Karzai called for the &ldquo;full Afghanization&rdquo; of the detention center, saying that some prisoners ordered released by the Afghan courts were still being held by U.S. forces.

Afghan prisons have long been criticized by human rights groups for poor conditions and torture, fears that have heightened with the appointment of Assadullah Khalid to head the country&rsquo;s National Directorate of Security, Afghanistan&rsquo;s intelligence agency. Khalid has been accused by a top Canadian diplomat, who worked with Khalid, of running an underground torture chamber in Kandahar.

The National Directorate of Security runs prisons throughout Afghanistan.