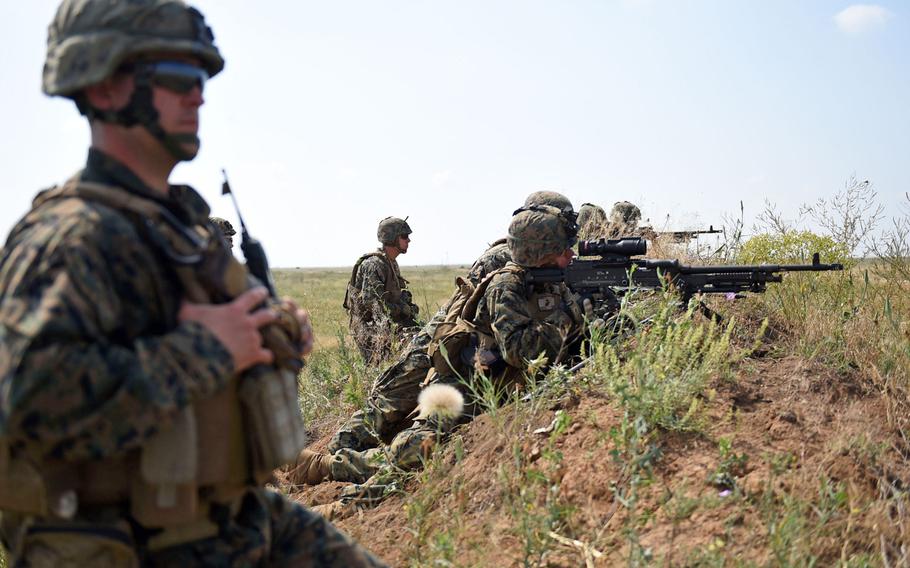 Buy Photo
A group of U.S. Marines with the 2nd Battalion, 25th Marine Regiment, engages targets while training with Ukrainian marines during the Sea Breeze exercise near Mykolaiv, Ukraine, in 2018. (Martin Egnash/Stars and Stripes)

Buy Photo
A group of U.S. Marines with the 2nd Battalion, 25th Marine Regiment, engages targets while training with Ukrainian marines during the Sea Breeze exercise near Mykolaiv, Ukraine, in 2018. (Martin Egnash/Stars and Stripes) 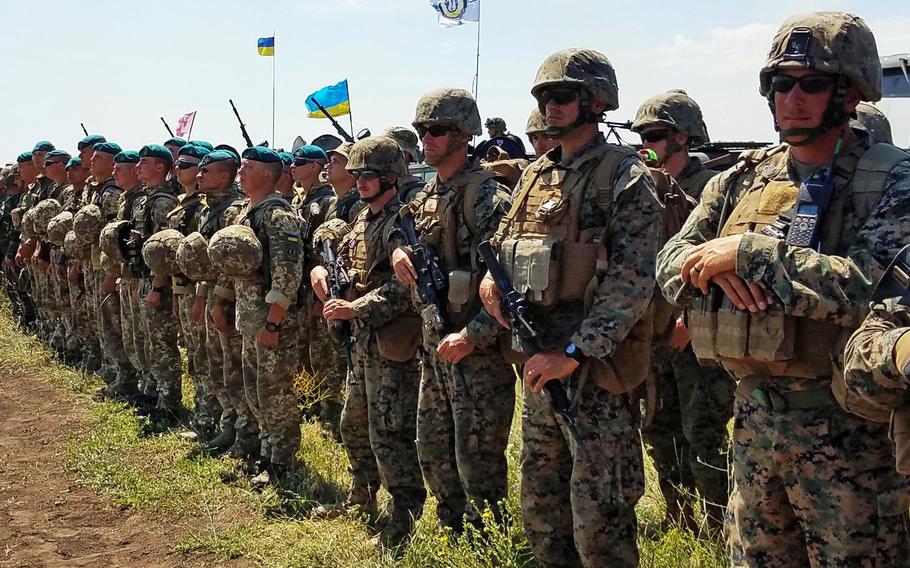 Buy Photo
Marines from the U.S. and Ukraine standing together after a company-level attack during the land portion of Exercise Sea Breeze, Saturday, July 14, 2018. Secretary of State Mike Pompeo said NATO allies could take additional steps when allies convene next week to help Ukraine defend against Russia. (Martin Egnash/Stars and Stripes)

The U.S. and its allies in Europe could agree at an upcoming NATO meeting to provide more support to Ukraine in its efforts to resist Russian aggression in the region, America’s top diplomat said Wednesday.

“Next week I am hopeful, when our NATO colleagues are in town, we will be able to announce another series of actions that we will jointly take together to push back against what Russia is doing there in Crimea and the Sea of Azov and the region,” Secretary of State Mike Pompeo said during a congressional hearing.

Pompeo will host NATO foreign ministers at a meeting next week in Washington, where allies also will mark the alliance’s 70th anniversary.

While Ukraine is not a member of the alliance, Russia’s 2014 military intervention in that country and subsequent annexation of its Crimean Peninsula has altered the security landscape across Europe.

“I don’t know that we’ve done all that we can yet,” Pompeo told lawmakers.

For its part, the U.S. has been training Ukrainian troops involved in the battle against Russian-backed separatists ever since fighting began five years ago. In May, Washington stepped up its support when it started to provide military equipment, such as anti-tank Javelin missiles, to Ukraine’s military.

In September, the U.S. Coast Guard also transferred two Island-class cutters, armed with .50-caliber machine guns and 25 mm deck guns, to Ukraine as part of an effort to bolster the country’s weak navy.

“I think there are some areas there that we can — we can help them get this navy back up and begin to supply it with what they believe they need to defend themselves and deter Russia’s aggressive actions,” Scaparrotti told the Senate Armed Services Committee on March 5.

In November, Russian coast guard vessels fired upon and seized the three Ukrainian ships that were attempting to pass through the Kerch Strait to the Sea of Azov. The clash was the sharpest escalation of force by Russia since it invaded Ukraine in 2014 and launched a proxy war in the country’s east.

Pompeo did not offer specifics Wednesday on what steps NATO could take when allies meet. He said the U.S. is “constantly evaluating” whether it is proving the right mix of resources.

“Not only the tools you see — munitions and arms — but intelligence-sharing,” Pompeo said.