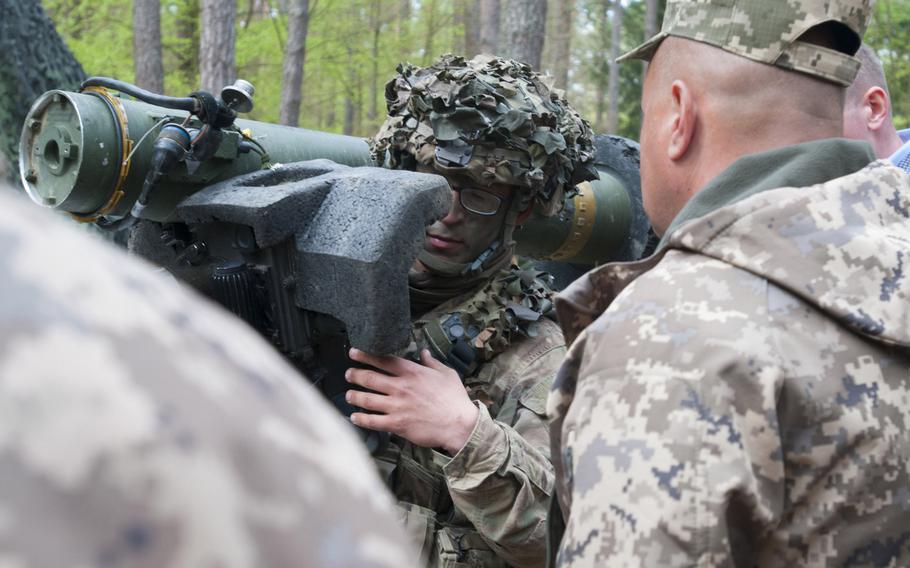 A soldier demonstrates how to use the Javelin antitank missile system as a delegation of Ukrainian military officials observes at at Hohenfels Training Area, Germany on May 9, 2017. The U.S. has delivered antitank missiles to Ukraine, the first shipment of lethal aid to the country. (Kayla Christopher/U.S. Army)

Ukrainian President Petro Poroshenko on Monday confirmed that the delivery of the FGM-148 Javelin weapons systems had been completed and that the weapons would help “the powerful deterrent effect of our combat capability.”

“We continue to work on strengthening our defense capability in order to deflect Russian aggression,” Poroshenko said on Facebook.

U.S. military leaders, however, have long favored providing more military support to Ukraine in the hope of increasing the costs for separatists and the Russian forces that support them.

It is unclear how much the new weapons will change the battlefield dynamics in the 4-year-old war, which has killed 10,000 people and at least 2,500 civilians, according to the United Nations. Some analysts believe the delivery of weapons is too little, too late.

Michael Carpenter, a former U.S. deputy assistant secretary of defense, said in an Atlantic Council forum Monday that the decision to supply arms was the right move, but that it does little to alter the balance of power.

“No one should fool themselves into thinking that Javelin missiles are a game-changer,” Carpenter said. “Javelins are useful weapons that will have a limited deterrent effect, but they won’t change the fighting capabilities of the Ukrainian military all that much.”

Ukrainian casualties have increased in recent months even as fighting has gone down, according to the top U.S. military officer in Europe.

“We have seen the violence level go down of late,” U.S. European Command’s Gen. Curtis M. Scaparrotti said in March. “But I would tell you, what you don’t see is — within that lower violence level, it’s less heavy artillery and more things like snipers, et cetera. So the casualties haven’t gone down. In fact, they’ve gone up a bit ... it’s still a hot war.”

But in such a fight, Javelins could be less useful now than they would have been earlier in the war when heavy weaponry was more of a factor.

The Javelin is a soldier-portable, fire-and-forget system, with a range of up to 2.7 miles. It has an 18-pound tandem warhead consisting of two shaped charges — one to pierce reactive armor and the other to penetrate into the vehicle. Its top-attack ability allows it to hit a target from above, where the armor is usually thinnest. It can also be used against battlefield fortifications.

“The supply of the Javelin anti-tank weapon system is welcome news, however, it is long overdue and may be sending a wrong signal to Moscow,” said Ariel Cohen in an Atlantic Council analysis of the Javelin deal. “While these missiles are necessary, they are supplied almost four years after they were requested, and in small numbers.”

The weapons, Cohen said, were needed in 2014. Their arrival now “may be signaling to Russia that the United States is very slow and will not respond with adequate strength and in a timely manner in the case of a major engagement.”