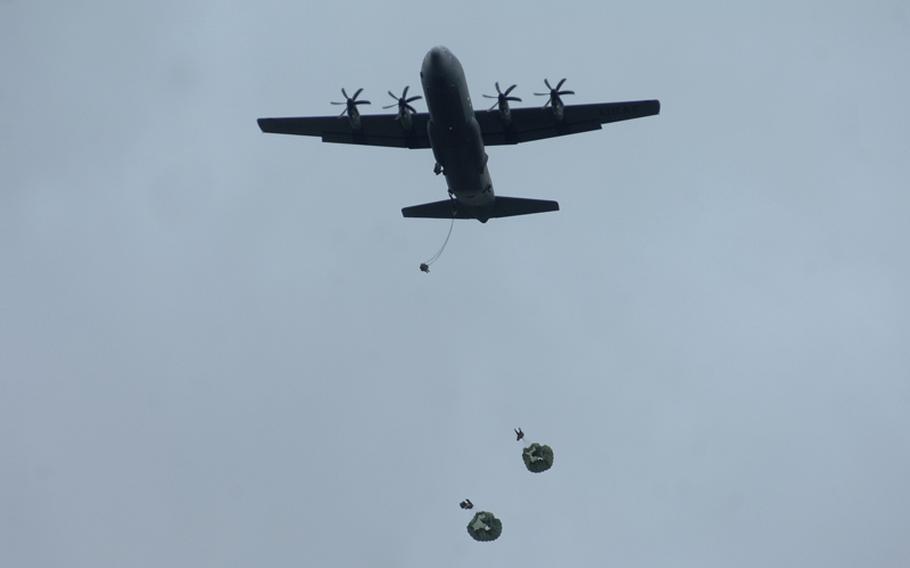 Several parachutes can be seen in the trees at the Hohenfels training area following a massive parachute jump to begin an exercise on Wednesday. (Steven Beardsley/Stars and Stripes) Paramedics with the Bayerisches Rotes Kreuz load a soldier into the back of an ambulance at the USAG Hohenfels clinic on Wednesday. (Steven Beardsley/Stars and Stripes)

As of 5 p.m. Wednesday, 35 soldiers had been tended to for injuries due to the drop, including 10 with serious injuries evacuated by helicopter and eight transported by ground to a hospital in nearby Regensburg, a garrison clinic official said. Fifteen were treated at the clinic, a staging point for the injured. Several more soldiers were en route to the clinic.

Second Lt. Carrie Goodell, the executive officer for the clinic, said some of the injuries appeared related to parachutes drifting into trees surrounding the drop zone.

&ldquo;We did expect this amount (of injuries),&rdquo; she said. &ldquo;But because the wind blew some into the trees, it raised the level.&rdquo;

More than 1,300 soldiers jumped into the Hohenfels Training Area in two waves on Wednesday to begin a massive training exercise known as a full spectrum training environment. Most were paratroopers with the 173rd, although a unit of Polish soldiers also jumped.

Most of the injuries came from the first wave of the morning drop, when roughly 650 soldiers jumped, according to officials.

After a first pass by the planes, witnessed by a reporter, eight parachutes could be seen hanging in trees on the northeast side of the drop zone. On two more passes, most soldiers landed in the drop zone.

Lt. Col. Steve Murphy, the S-3 for the Joint Multinational Readiness Center, which is holding the exercise, said the first pass was the only one to land soldiers in the trees. He said the medic response worked as planned, with on-site medics providing initial treatment to soldiers.

Most of the soldiers evacuated by air were taken from the field by U.S. helicopters, Murphy said. He knew of one who was transported to the clinic, evaluated by German doctors and flown out by German helicopter.

Goodell said the German ambulances, with the local Red Cross, were in place at the clinic before patients began arriving, part of the clinic&rsquo;s advanced planning for the jump. Murphy said planners considered how to medically evacuate soldiers long in advance of the jump. He said participants in the planning included the Red Cross, the post fire department and an observer controller team, among others.

&ldquo;We had a plan in place to treat the injured,&rdquo; he said. &ldquo;The plan is working.&rdquo;

A soldier seen standing on crutches outside the clinic on Wednesday afternoon said he tore a ligament in his left foot when he hit a pothole in the drop zone. A private with the 173rd, he blamed a &ldquo;bad DZ&rdquo; for the injuries, and he said he saw other soldiers hurt. He declined to give his name.