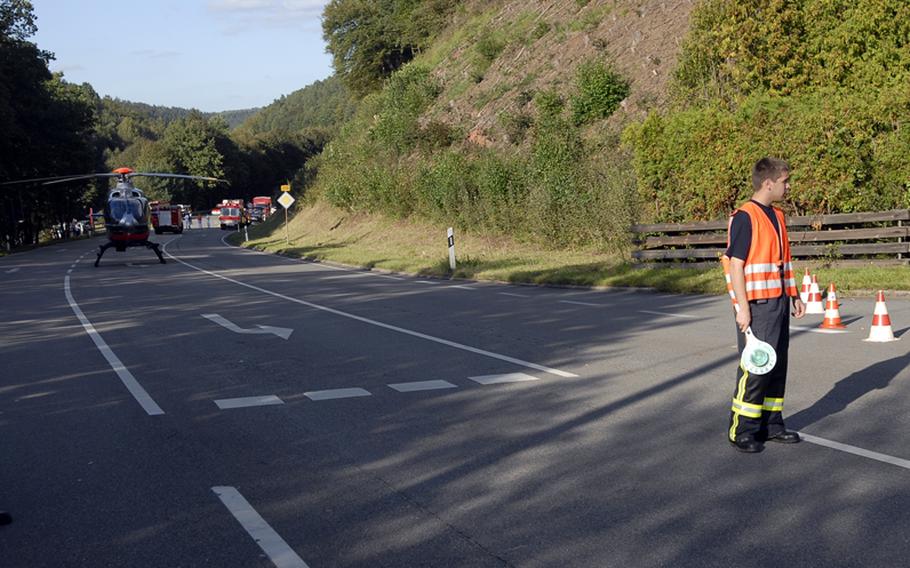 Buy Photo
Pascal Zirkel, a German firefighter with the village of Krickenbach, helps block traffic on highway B-270 outside the entrance to the village of Schopp on Wednesday, after what's believed to be a World War II-era phosphorous bomb was discovered behind the Schopp train station, according to local firefighters at the scene. (Jennifer H. Svan/Stars and Stripes)

SCHOPP, Germany &mdash; German authorities evacuated hundreds of residents of Schopp, a village where many members of the Kaiserslautern military community live, late Wednesday while they carried out a controlled detonation of what authorities said was a World War II-era phosphorous bomb discovered behind the train station.The bomb was detonated about 11:30 p.m. by a team of bomb experts flown in from Koblenz. A loud &ldquo;boom&rdquo; could be heard from the center of town, where evacuees were gathered at a sports hall.All residents were allowed to return to their homes about two hours later. The Rheinpfalz newspaper reported that authorities first conducted air measurements, but found no signs of toxic substances.Those living within a 1,100-yard radius of the bomb site were ordered to evacuate, including Americans, many of whom live in the section of the village affected by the order. About 130 Americans live in Schopp, according to a town official.Authorities drove through the town with loudspeakers telling residents to leave their homes, while others knocked on doors.

Residents gathered at the primary school and sports hall in the center of Schopp, where cots were set up, and volunteers were serving drinks and sandwiches.Among those gathered was Army spouse Arthur Harvey, 25, who admitted he thought about not heeding the evacuation order.&ldquo;We&rsquo;re only two minutes away from our house,&rdquo; he said Wednesday night. &ldquo;Are we really safer here?&rdquo;German authorities, assisted by U.S. Air Force security police from Vogelweh, rang the doorbell &ldquo;and made us leave,&rdquo; he said.Army civilian Thomas James, 42, waited out the detonation outdoors under a starry sky as the evening quickly turned chilly. He&rsquo;s lived in Germany for five years and has heard of World War II bombs turning up before, but &ldquo;I didn&rsquo;t know it was this serious. I would have never thought one would be found in this small town, way out here in the middle of nowhere.&rdquo;Many didn&rsquo;t know a war relic was the reason for the commotion until arriving at the school. When Tech. Sgt. Ken Powers, 35, an Air Force weather forecaster, heard &ldquo;a bomb was found,&rdquo; he immediately expected the worst: a terrorist. &ldquo;It&rsquo;s what we all think,&rdquo; he said. Earlier in the evening, authorities closed highway B-270 outside the entrance to the village &mdash; about five miles south of the U.S. military&rsquo;s Vogelweh base. A local official said a 30-kilogram (66-pound) bomb was smoking. Part of the device, found in the woods near the train tracks, was sticking out of the ground, local officials said.Gudrun Hess-Schmidt, a deputy county commissioner from Kaiserslautern, said Wednesday night that it is relatively common to find bombs left over from the war, but not ones that are smoking. &ldquo;It&rsquo;s very old and rusted,&rdquo; Hess-Schmidt said. svanj@estripes.osd.mil(Editor&rsquo;s note: Reporter Jennifer Svan lives in Schopp and was among those evacuated.)