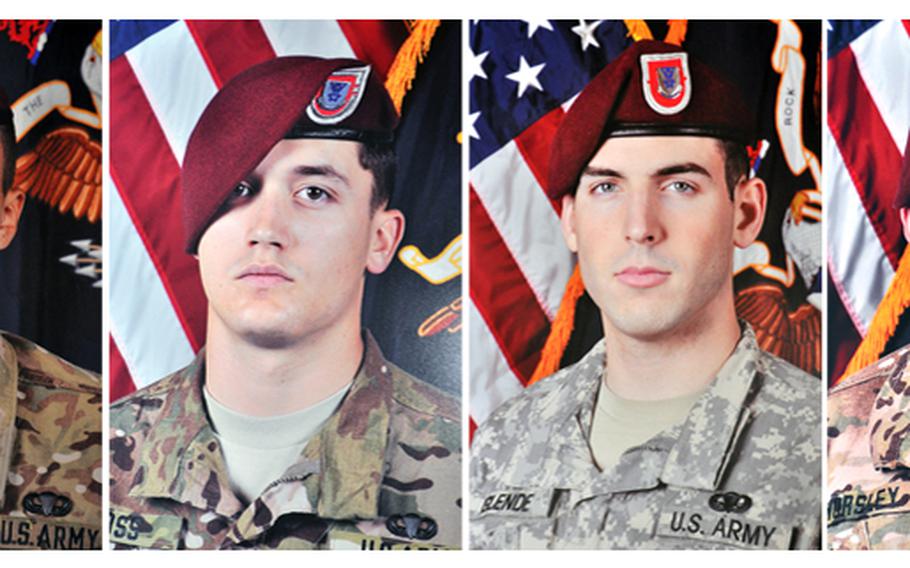 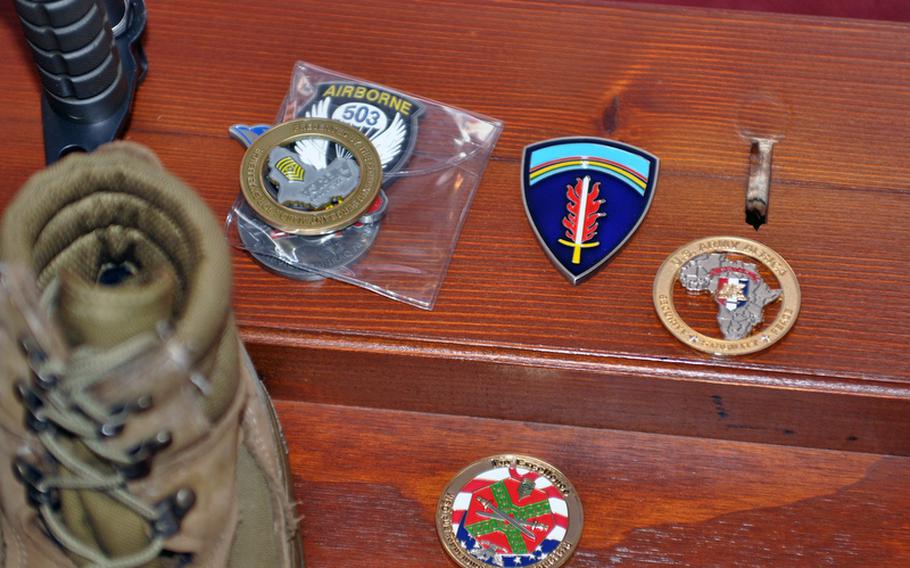 Commanders and top enlisted leaders placed coins near the boots of four soldiers from the 173rd Airborne Brigade Combat Team who were killed in Afghanistan in July. Their home base of Caserma Ederle in Vicenza, Italy, remembered them in a ceremony Thursday. (Kent Harris/Stars and Stripes) 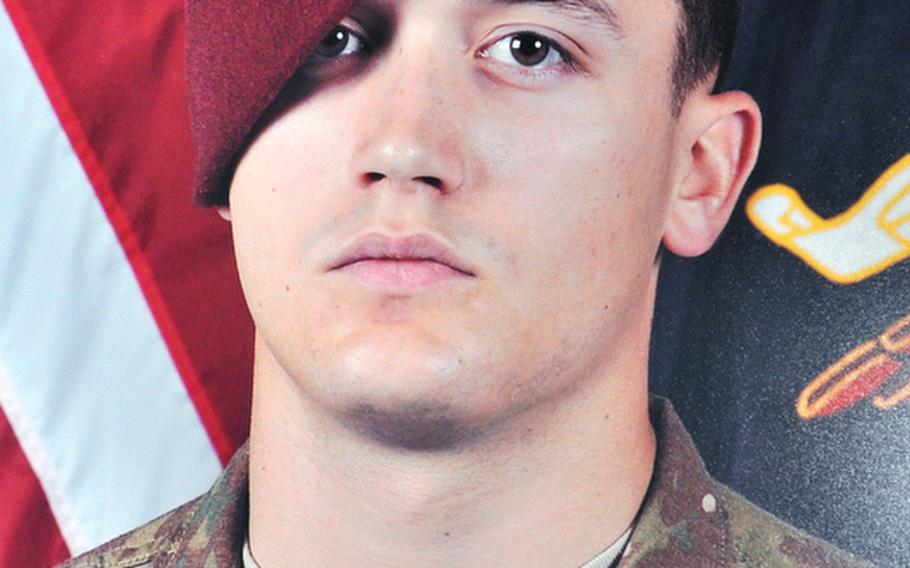 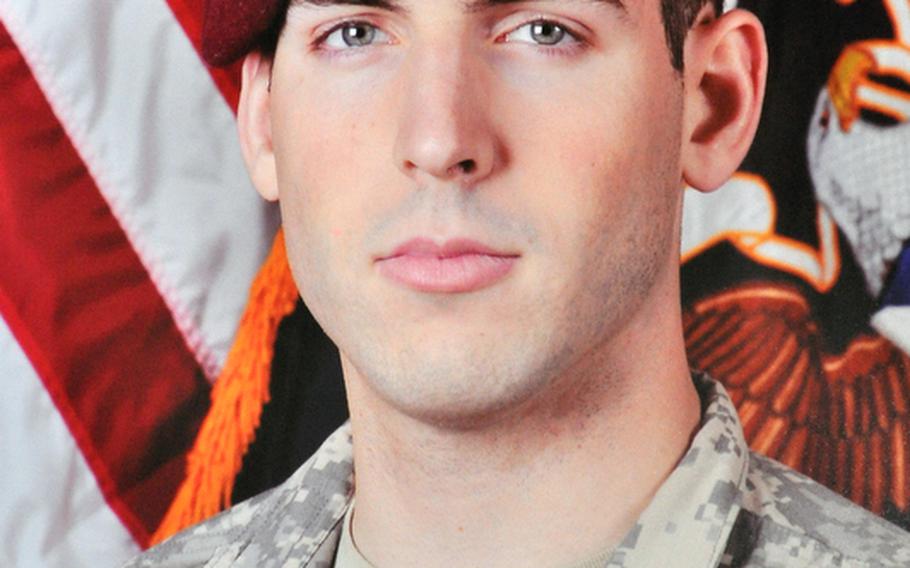 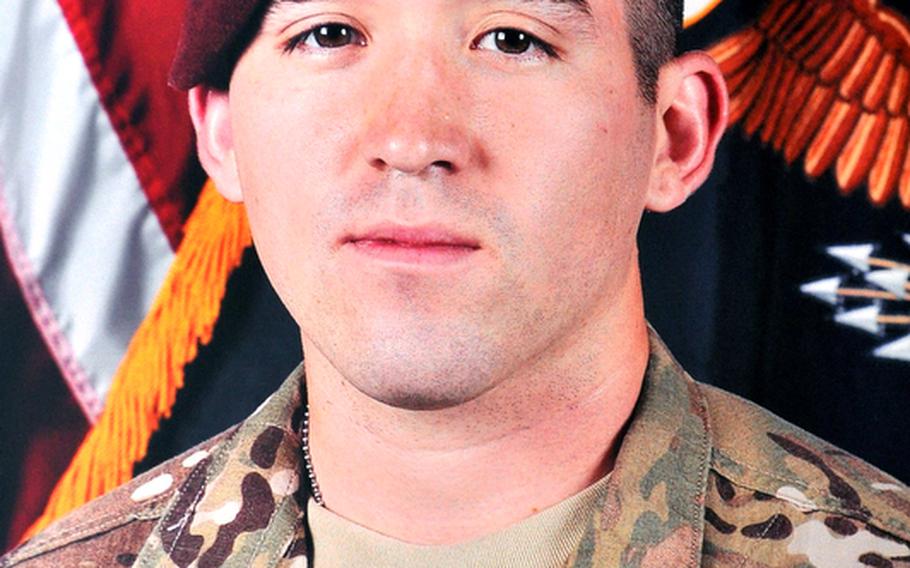 VICENZA, Italy &mdash; Spcs. Justin Louis Horsley and Brenden Neal Salazar grew up 35 miles apart in Florida, processed into the Army through the same center in Tampa within a few months of each other and each reported to Vicenza for his first assignment.

&ldquo;It&rsquo;s like these guys were destined to be together right until the end,&rdquo; said Capt. Bradley Benjamin, the battalion&rsquo;s rear detachment commander, said during a memorial ceremony Thursday on Caserma Ederle.

Horsley and Salazar were two of four members of the 173rd Airborne Brigade Combat Team killed in Afghanistan who were remembered during the ceremony, the first held on base since the Sky Soldiers began their fourth deployment to Afghanistan in June.

&ldquo;He was different from most of us. He wasn&rsquo;t a killer. He was a defender. He never started a fight and did his best to stop them.&rdquo;

Salazar, 20, was born in Fort Bragg, N.C., and grew up in Chuluota, Fla., according to information provided by the brigade. He is survived by his parents, James and Jovanna Nelson, and his sister, Hannah.

Spc. Mark Fragoso was a member of Horsley&rsquo;s platoon and his roommate.

&ldquo;He always had a content look on his face, no matter what the circumstances,&rdquo; Fragoso said. &ldquo;He scheduled and planned everything he did and it kept me in awe.&rdquo;

Horsley, 21, was born in Seoul and grew up in Cocoa, Fla. Fragoso said that Horsley had to become an adult quickly after his father passed away. He is survived by his mother, Songmi Kietzmann, and two brothers, John and Ben Horsley.

Glende died from small arms fire July 27 in Kharwar, Afghanistan, while rendering aid to a fellow Sky Soldier, according to Spc. Gregory Hedlund.

&ldquo;It was obvious to the people who knew him that he could have done anything he wanted to in his life, yet he chose to be a paratrooper.&rdquo;

Glende, 23, was born and raised in Rochester, N.Y., and completed the ROTC program at Niagara University, according to the brigade. But he wasn&rsquo;t assigned to the infantry and decided to enlist in the infantry instead. He is survived by his wife, Alexandra; his parents, Theodore and Avamaria; and a brother, Eric.

He said during training deployments and on base Ross &ldquo;always volunteered, always stepped forward, always gave his all.&rdquo;

Capt. Chris Gasperini, the battalion&rsquo;s rear detachment commander, said Ross grew up in a military family &mdash; his father serves in the South Carolina National Guard and brother Jonathon is assigned to Korea &mdash; and wanted to be a paratrooper since he was 2 years old.

Ross, who grew up in Lyman, S.C., is survived by his parents, George and Amanda, and brothers Jacob and Jonathon.

The chapel was filled to capacity for the service, with most of those attending in military uniform, including two of the senior Army leaders in Europe: Lt. Gen. Mark Hertling, commander of U.S. Army Europe, and Maj. Gen. David Hogg, who relinquishes command of the Vicenza-based U.S. Army Africa on Friday.