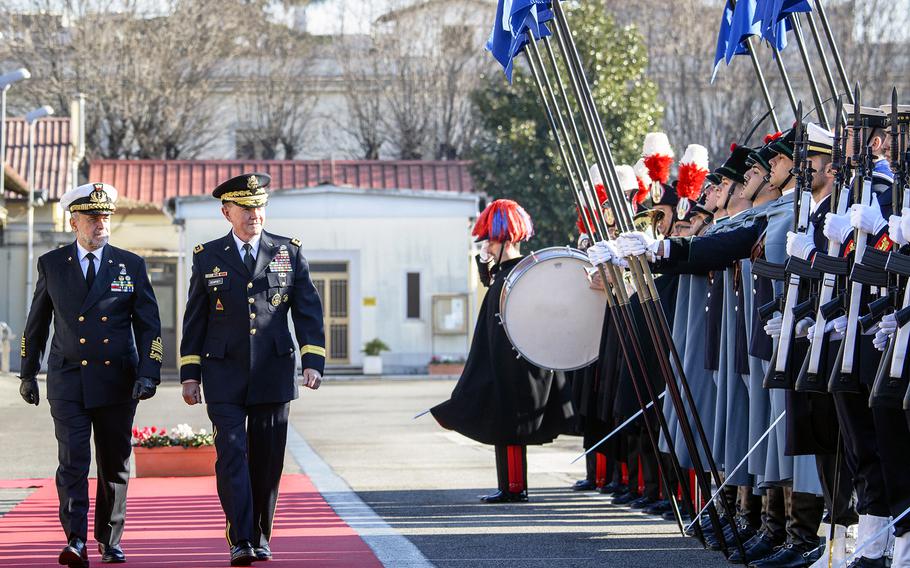 This story has been clarified.

NAPLES, Italy — The U.S. Joint Chiefs chairman and Italian officials said Monday that Washington and Rome share concerns about extremists entering Italy’s south at a time of record migration into the country from the Middle East and North Africa.

The U.S. has warned in the past about the possible flow of foreign fighters through Europe’s southern flank. European governments are increasingly worried about their own citizens who have traveled abroad to train with terrorist groups and then return home. The recent attacks in Paris and the thwarted attacks in Belgium have underscored those concerns.

The meeting included discussions about U.S. and allied operations against the Islamic State group in Iraq and Syria.

Dempsey noted the influx of migrants into Italy from unstable regions to the east and south. Both sides expressed concern that foreign fighters may also try to enter Italy or other parts of Southern Europe, according to a Defense Department release. Dempsey said countries in the Middle East and North Africa should be a part of any discussion about extremism.

“Looking at it one country at a time is not the answer,” Dempsey was quoted as saying. He told his counterparts the issue would be discussed at a NATO defense ministers’ meeting Wednesday and Thursday in Brussels, his next stop after Rome.

More than 170,000 migrants have entered Italy in the past year, crossing the Mediterranean Sea. That’s roughly four times the number in 2013, according to estimates released last week by the International Organization for Migration.

An IOM official said those trying to cross into Italy are refugees and asylum-seekers escaping war or impoverished conditions.

“We don’t have any reports of infiltration or what we think would be characterized as al-Qaida or something like that using this as a launching point,” spokesman Joel Millman said.

Syria remains the top point of origin of refugees arriving by sea, with more than 42,000 coming last year, according to IOM. In recent months, more boats have come to Italy from Turkey, which hosts roughly 1.8 million refugees from Syria’s civil war. Many boats still come from or through Libya, where warring militias have caused instability.

The crossings are dangerous. More than 3,000 migrants died last year trying to make the journey, some of them from onboard fights and attacks.

Smugglers, who charge migrants hundreds of dollars each, pack them into small, ramshackle boats for a perilous crossing on the open sea.

“They’re pushed out to sea and, fingers-crossed, they don’t die,” Millman said. “That’s basically the practice.”

Italian officials process those who make it to shore, he said, making it more unlikely the journey would be attractive to militants seeking to slip into Europe.

Clarification: This story has been updated to clarify that Gen. Martin Dempsey did not frame migration as a security issue but spoke of it as the result of instability along NATO’s southern borders.