Decision by Heidelberg base is for the birds 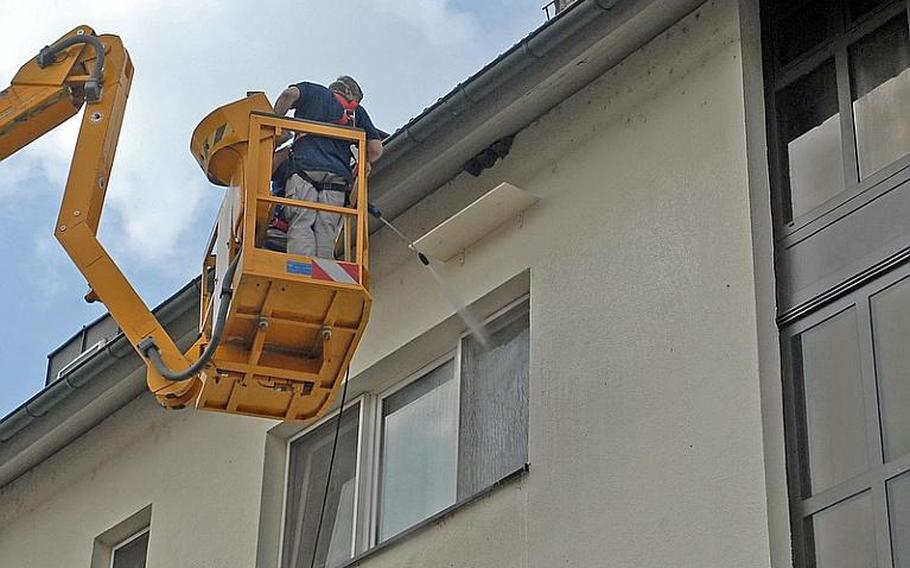 Buy Photo
Workers for U.S. Army Garrison Baden Weurttemberg wash windows of a building on Patrick Henry Village last week after installing a board to catch droppings from nesting house martins. The birds' numbers have declined throughout Europe, and they and their nests, which they return to year after year, are protected in Germany and may not be removed. Six nests on the building were the first evidence of the birds' return to the area. (Nancy Montgomery/Stars and Stripes)

HEIDELBERG, Germany &mdash; To the young sergeant with the wife and baby, the bird nests in the eves of building 4463 were worse than a nuisance.

Droppings from the nests befouled the windowsills and spattered the building, a hazard to the several new human babies who lived inside, he said.

He called authorities and complained at a recent town hall meeting for U.S. Army Garrison Baden-Wuerttemberg.

&ldquo;It seems like the birds are more important than the people,&rdquo; said the sergeant, who declined to be named.

Everybody looked up at the six small mud nests, from which so many droppings had come, nestled in the eves. And to Thomas Cahn, chief of the environmental division, they were a beautiful sight.

The birds in question were house martins, a bug-eating, migratory bird that spends spring and summer in the eves of European houses, then flies to Africa for the winter.

It was the first time, Cahn said, that there had been evidence of nesting house martins within the garrison.

It is a small bird, with glossy blue-back feathers on top and white feathers underneath.

&ldquo;It has a distinctive white rump with a forked tail and, on close inspection, white feathers covering its legs and toes. It spends much of its time on the wing collecting insect prey,&rdquo; according to the website of The Royal Society for the Protection of Birds in Great Britain.

They are also protected by both European Union and German law, said Ludger Henning, an environmental protection specialist, because their population has been in decline.

And their nests are their castles.

There is an exception. During home renovations, the nests may be removed &ndash; if its baby birds have flown off &ndash; after getting the proper permits. But then the homeowner must install new, man-made nests to welcome the house martins home again the next year.

&ldquo;They keep their nests clean,&rdquo; Cahn noted. &ldquo;They turn around when they need to make their droppings.&rdquo;

So what to do?

The solution to mediate between man and bird was on hand: a length of board to be bracketed on the building under the nests to catch the droppings and keep everything underneath clean. The contractors measured 50 centimeters &mdash; about 20 inches &mdash; below the nests, the minimum distance allowed so bird flight is unimpeded.

Not everyone knows the rules, however.

Last year, near Stuttgart, for example, a local man who removed two swallow nests with a garden hose was fined 600 euros, about $864.

Neighbors had photographed him hosing the nests and notified authorities, according to a Stuttgart newspaper account.

The man asked for leniency, saying the birds were dirty and noisy and woke up his young children at 4 a.m.

The judge said he understood. &ldquo;The noisy birds in the early morning, the droppings, and then two little children in the house, that does not work at all,&rdquo; the judge agreed, according to the newspaper.

Then he recommended the man pay the fine and find another apartment.

As the contractors put up the boards and pressure-washed the building at Patrick Henry Village, Cahn said his office planned an inventory to see if there were more nests that required more boards to be installed.

The young sergeant looked on. What did he think? &ldquo;As long as it fixes the problem, I don&rsquo;t care,&rdquo; he said.

&ldquo;The only thing I&rsquo;m worried about now is pigeons sitting up there,&rdquo; he said.