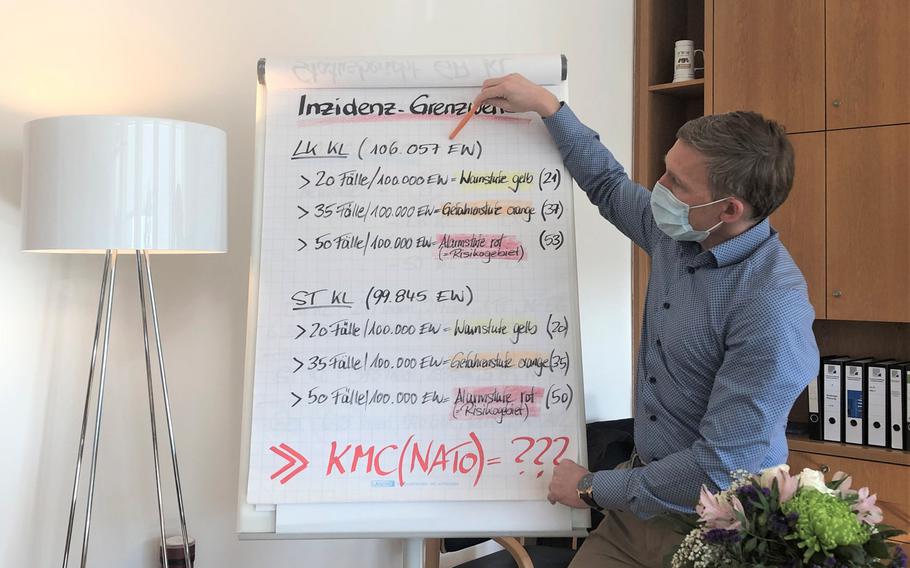 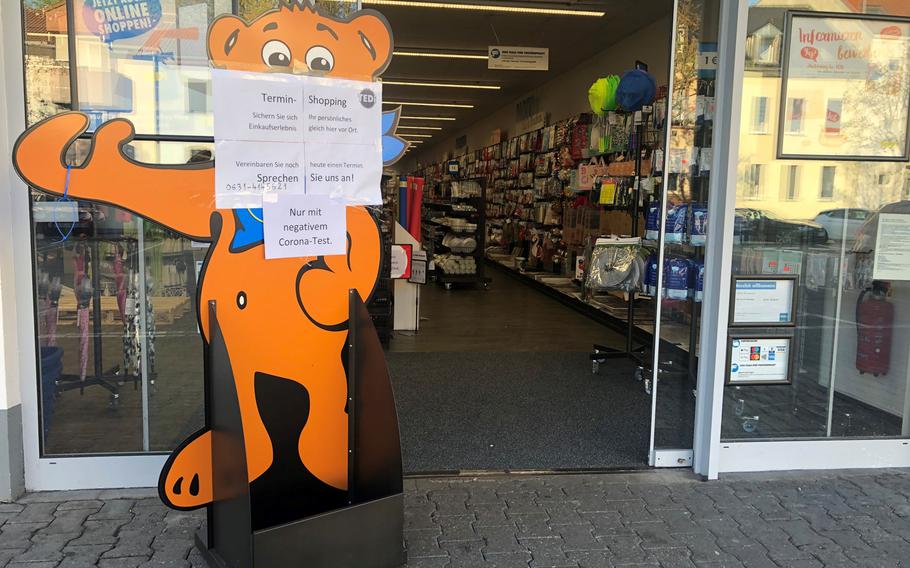 A sign outside a shop in Kaiserslautern, Germany, on April 24, 2021, says customers are welcome as long as they have a negative coronavirus test and appointment. ( Karin Zeitvogel/Stars and Stripes)

KAISERSLAUTERN, Germany — Kaiserslautern officials are seeking a court order that would allow them to include tens of thousands of Americans who live in the region in coronavirus tallies, which would push incidence rates down and could allow many businesses to reopen.

“Including the U.S. armed forces and NATO members who actually live here would increase the population by around 50,000,” Ramstein-Miesenbach Mayor Ralf Hechler and Kaiserslautern district councillor Ralf Lessmeister said in a statement posted Wednesday on Facebook.

“That would have a significant effect on our incidence rate, which would regularly be below 100,” the statement said.

A federal “emergency brake” law passed last week mandated that restrictions would automatically be put in place in cities and districts when there is a weekly average of over 100 new infections per 100,000 people.

Excluding thousands of American residents from the incidence calculation is “clearly wrong” and a violation of the basic rights of people living and working in the region, Hechler and Lessmeister said. Many Americans in the area have ties to Ramstein Air Base or Army installations.

As of Wednesday, the rate of new infections in the city of Kaiserslautern was 156 cases per 100,000 people, according to Germany’s public health agency, the Robert Koch Institute. In the district, which includes Ramstein and Landstuhl, it was slightly lower, at around 138 new infections per 100,000 residents.

If the U.S. military community were counted, the rate for new cases would be 146 per 100,000 for the city and just under 118 for the district, data posted on Facebook by Lessmeister show.

The U.S. military community makes up around 40% of the district's population, according to statistics provided by Lessmeister in February.

RKI compiles the data shown on its website using information from the Federal Statistical Office, which does not include U.S. military communities, spokeswoman Susanne Glasmacher told Stars and Stripes.

The agency has no plans to change the way does its calculations because that would require including “not only the (U.S.) armed forces but also other groups of people who do not live in Germany," she said.

But Americans in Germany under the Status of Forces Agreement are considered legal residents of the country.

Glasmacher conceded that local authorities’ knowledge of infection, population and other data in their region should factor into decisions on what measures need to be taken to contain the virus.

But the emergency brake regulations impose the same rules for all areas when the incidence rate exceeds 100 new cases per 100,000 people. The rules mean both Kaiserslautern city and the district have been under a 10 p.m. to 5 a.m. curfew since last week, and restaurants, which had cautiously begun reopening outdoor dining areas, have gone back to takeout and delivery only.

Shopping for nonessential goods in the city of Kaiserslautern has required a negative coronavirus test and an appointment since last week, when the infection rate exceeded 150 new cases per 100,000 residents.

Kaiserslautern officials are briefed regularly by the U.S. military about coronavirus infections among local Americans, Lessmeister told Stars and Stripes in February.

Lessmeister sends infection data, including and excluding the U.S. military community, to state officials, who pass on both sets of numbers to RKI, Rheinland-Pfalz spokeswoman Stefanie Schneider said at the time.

But RKI posts only the higher incidence rate — not including the U.S. military population in its calculations, Schneider said. The health agency does, however, count individual Americans who are infected, she said.

The state has “pointed out this problem to the RKI and the Federal Ministry of Health several times, but is not authorized to issue instructions,” Schneider said in an email.

There were no new infections among U.S. military members as of Wednesday and 69 new cases in the broader community, data posted on Lessmeister’s official Facebook page show.