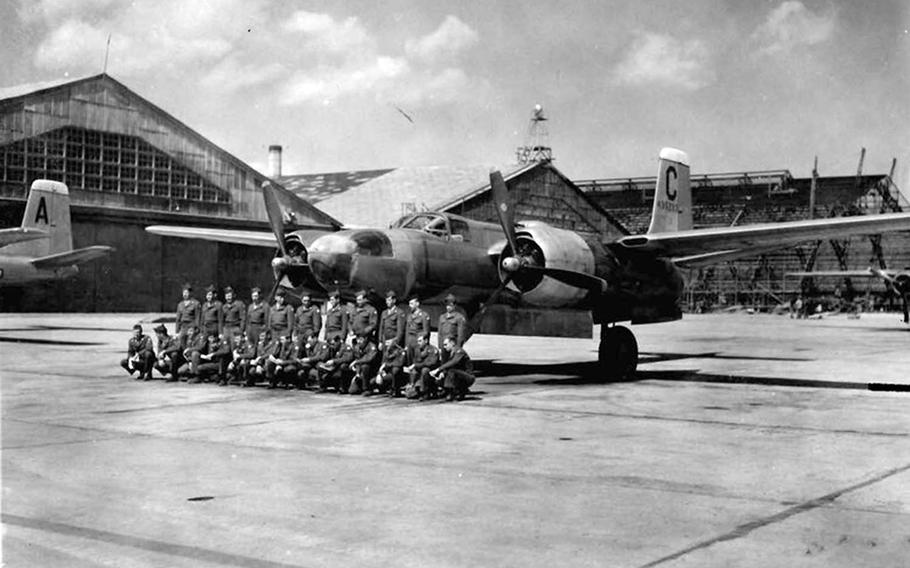 Yokota Air Base historian Lesleigh Jones said some structures have histories that suggest hauntings for those who connect fact to legend. The hangars along the flight line, for example, are some of the oldest buildings on base and date to the World War II era. (U.S. Air Force)

Yokota Air Base historian Lesleigh Jones said some structures have histories that suggest hauntings for those who connect fact to legend. The hangars along the flight line, for example, are some of the oldest buildings on base and date to the World War II era. (U.S. Air Force) 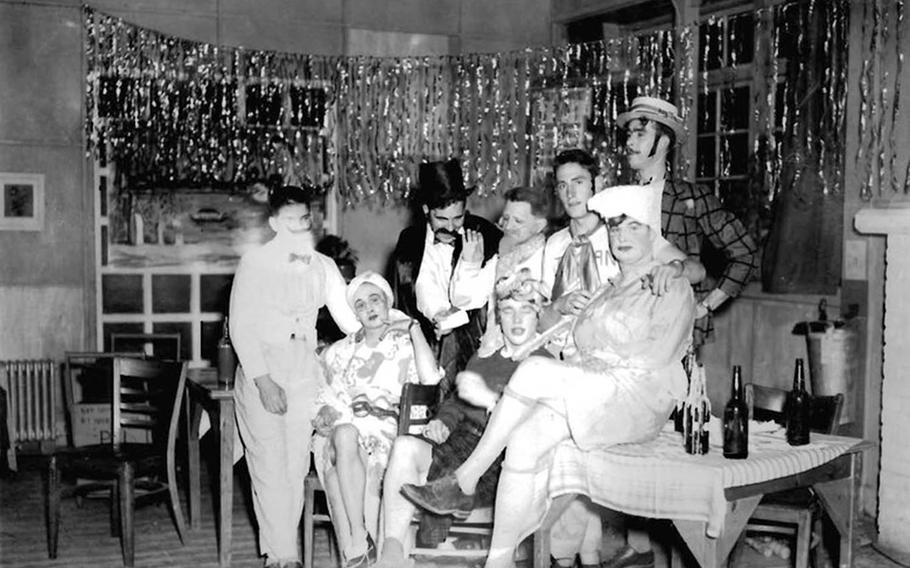 Yokota personnel stage a production of "One Night in Tokyo," in 1948. Base historian Lesleigh Jones said legends and ghost stories tend to stem from older buildings with personality. (U.S. Air Force) 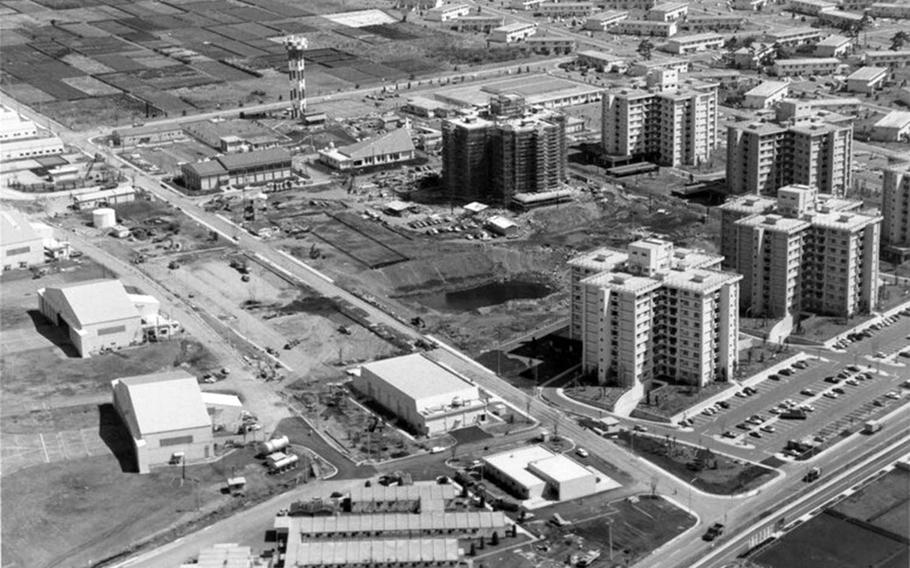 This aerial view of Yokota Air Base, Japan, shows housing towers and other buildings under construction on the east side in the mid-1970s. (U.S. Air Force) 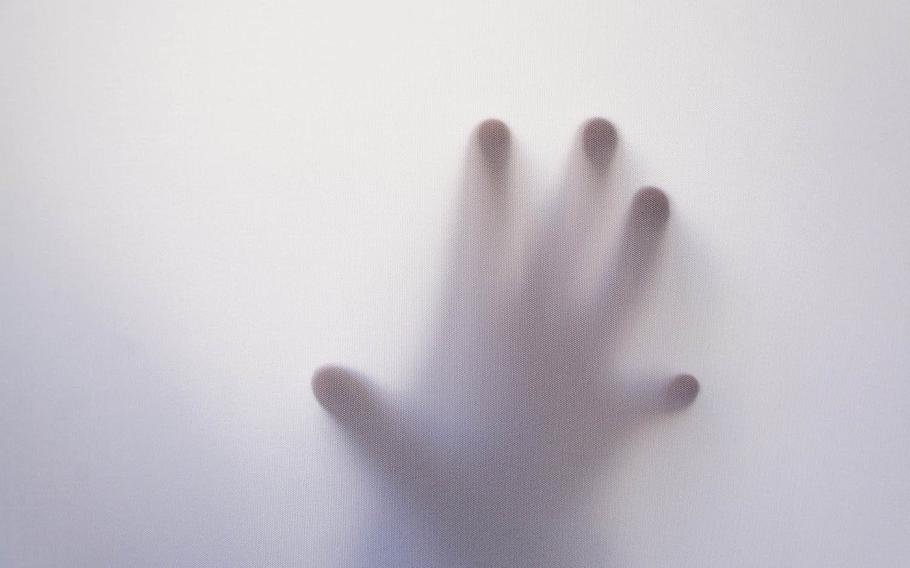 YOKOTA AIR BASE, Japan — Strange things started happening the day Alicia Adachi moved into her on-base home, a garden unit on Yokota’s west side, in 2012.

She said she would sometimes find the bed in her spare bedroom inexplicably stripped of it sheets and blankets. She heard loud crashes in her kitchen in the middle of the night but found nothing broken or misplaced. Sometimes, Adachi said, she’d wake up to find all her kitchen cabinets wide open when they were shut the night before.

The ongoing series of bizarre events led her to seek confirmation among others with shared experiences, and eventually to start up the Yokota Ghost Hunter Club, which has more than 900 members on Facebook. The club encourages sharing written accounts, videos, electronic voice phenomenon and photo evidence of the spiritual realm and the paranormal.

Early this month, for example, Staff Sgt. Breanna Adams of the 374th Civil Engineer Squadron wrote to the group that she and her husband often heard clear, persistent knocking noises within their old eastside tower unit. Security camera footage showed televisions and bedroom lights turning on and off when no one was home, she told Stars and Stripes on Wednesday.

Adachi said she started the group because she wanted to feel less alone and get confirmation that she wasn’t “crazy” because of her experiences.

“At first, I was able to brush it all off, excusing everything away on things on my then-husband,” Adachi said in a recent interview with Stars and Stripes via Facebook Messenger from her home in Oregon.

“But when he deployed, I suddenly was left with no one else in the house to blame for what was going on.”

The group also feeds its members’ curiosity about the paranormal and builds new friendships, Adachi said.

“Sharing ghost stories is actually a great concept for creating a community because it welcomes people from all different backgrounds, skeptics and full-on believers alike,” she said.

Yokota lore Yokota historian Lesleigh Jones, a specialist in architectural history, said connections between places and their lore often relate to the age and appearance of a building, allowing people’s imaginations to take rein over logic.

“Some of the association often gets romanticized,” she said. “Not that things can’t happen in newer buildings, but legends and ghost stories tend to stem from older buildings with personality.”

Jones, who arrived at Yokota in September, said she’s researching each of the buildings on base and combing through archives left untouched since her predecessor moved on two years ago.

Some structures have histories that suggest hauntings for those who connect fact to legend, she said.

The hangars along the flight line, for example, are some of the oldest buildings on base and date to the World War II era. Underground structures once used for munition storage are also intriguing sites, Jones said.

The most interesting historic detail about Yokota, in Jones’ opinion, is that Airlift Avenue follows an old pilgrimage route from Tokyo through farmland where the base stands today to an ancient shrine dedicated to the samurai. The emperor and his family customarily traveled along this route, Jones said.

Historically, Jones said, passersby who did not pay proper respect or courtesies to routes considered sacred could be killed, and people may have been slain on the road for that reason.

For the Japanese, the concept of haunting is connected to the belief that spirits inhabit inanimate objects, said Steve Matsumoto, a computer technician at the base library.

Matsumoto said he experienced paranormal activity when he worked at the Taiyo Community Center on the base’s west side. Bathroom stalls opened and closed on their own and he heard a piano playing while he was alone in the center.

“I am not spiritual, but I do believe in ghosts,” he said. “In Japan, the belief is that we are haunted by human entities, rather than monsters or demonic spirits.”

Feline mystery Military sites tend to gather lore and ghost stories, and not only because of deaths in battle, Jones said.

“Military bases have added layers of mystery because most people don’t have access to them,” she said, “so the knowledge and stories are all secondhand.”

Jones said a group like the Yokota Ghost Hunter Club fosters an interest in history.

“Night apparitions have a way of keeping history in our consciousness,” she said. “It allows for relaying information, so history is not stuck on a shelf.”

Adachi, the club founder, said the height of her supernatural experience came one night when she noticed her normally clingy cat was being unusually quiet.

“I got up and started looking for her. I checked everywhere in the house, except for the spare bedroom that I now kept closed at all times purely because of how much activity happened in there,” she said.

“I found her in the closed-off room that she had no way of getting into, in pure terror, shaking under the bed. When she realized it was me standing there and not someone or something else, she low-crawled to me and was very afraid of leaving my arms. I took one look at her face and we went straight to the vet, because she had a chunk missing from her poor face.”

The veterinarian was confused by the cat’s wound, saying it looked like a large animal had bitten a chunk out of her face, Adachi said. The vet also said the wound appeared to have a burn mark.

Adachi said she neither had any other pets in the house nor a space heater or anything else that could have caused a burn.

At this point, Adachi said, she told her deployed husband what was going on, and he decided he would order a crucifix and a pet collar charm of Saint Francis for protection.