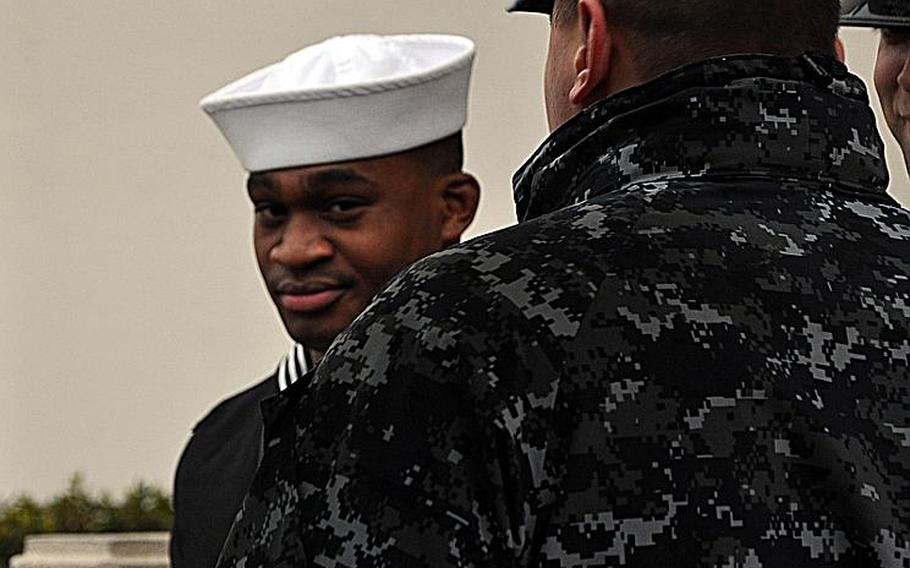 Seaman Lequae Caldwell, 23, of Benton Harbor, Mich., received a 15-year sentence after a Yokosuka, Japan, court-martial found him guilty Feb. 16, 2012, of murdering his infant daughter with 'two karate-chop-type blows' to her chest. The incident occurred on Jan. 5, 2011. (Trevor Andersen/Stars and Stripes)

YOKOSUKA NAVAL BASE, Japan &mdash; A USS Fitzgerald sailor pleaded guilty to murder for killing his infant daughter with &ldquo;karate chop-like blows,&rdquo; and was sentenced Thursday to 15 years in prison.

The stress of providing for his family, his job and other factors led Seaman Lequae Caldwell, 23, to take out his anger on his crying daughter, 5-month-old Aviana, on Jan. 5, 2011, the sailor said while reading an unsworn statement at his Yokosuka court-martial Thursday.

Caldwell struck &ldquo;the chest (her chest) with his hand using two karate chop-like blows,&rdquo; according to court documents read by the judge. The blows ruptured his daughter&rsquo;s heart, and she likely died within minutes after experiencing &ldquo;air hunger,&rdquo; according to medical testimony.

Caldwell said he initially denied striking his child to spare the feelings of his wife, Seaman Camellia Ngirmang, who served with him aboard the Fitzgerald.

&ldquo;I lied because I couldn&rsquo;t give my wife a dead child and a murdering husband at the same time,&rdquo; Caldwell said.

Caldwell later admitted to the crime in a videotaped confession to Naval Criminal Investigative Service agents.

The military judge, Capt. David Berger, sentenced Caldwell to 21 years in prison. However, under the rules of the Uniform Code of Military Justice, the lighter sentence in the plea agreement takes precedence over the judge&rsquo;s ruling.

Caldwell will receive credit for 407 days of time already served at the Yokosuka brig.

The accused told the court that he panicked after striking Aviana at his Yokosuka base residence. He tried giving her a cold shower in the hopes that Aviana&rsquo;s shallow breaths would return to normal. Then he went to his computer to seek medical advice online. When he returned to his daughter, she was not breathing.

&ldquo;I was afraid to go for help because I did not know how to explain it,&rdquo; Caldwell said. &ldquo;In the moment, I wanted to die as well. I wanted to jump off my balcony headfirst, but I could not leave my wife with no explanation.&rdquo;

Caldwell said he attempted CPR. He then carried her out of the apartment and downstairs, where he ran into his wife in the Nanaban Tower parking lot, he told the court.

They went to the hospital, where Caldwell made up a story about his daughter&rsquo;s fate. Medical officials later notified law enforcement authorities.

When Caldwell&rsquo;s wife took the stand, she began weeping when asked to review 20 photos of Aviana.

&ldquo;Is it fair to say that at the time of her death you considered her your life, your reason for being?&rdquo; asked co-prosecutor Lt. Cmdr. Andy Myers.

Co-defense counsel Lt. Adam Partridge asked Ngirmang if she loved her husband and hoped he could return home as soon as possible.

Ngirmang answered yes to both questions.

Co-prosecutor Lt. Eric Nelson argued that for the protection of that son, Caldwell should be locked up for 25 years.

&ldquo;All that potential, that vibrant young life &hellip; was ended at the hands of her father,&rdquo; Nelson said.

&ldquo;No one in this courtroom &hellip; will feel that more acutely than Fireman Caldwell,&rdquo; Larsen said.

Caldwell, of Benton Harbor, Mich., also received a dishonorable discharge, reduction in grade to E-1 and forfeiture of all pay under the terms of a pretrial agreement, in exchange for his guilty plea.