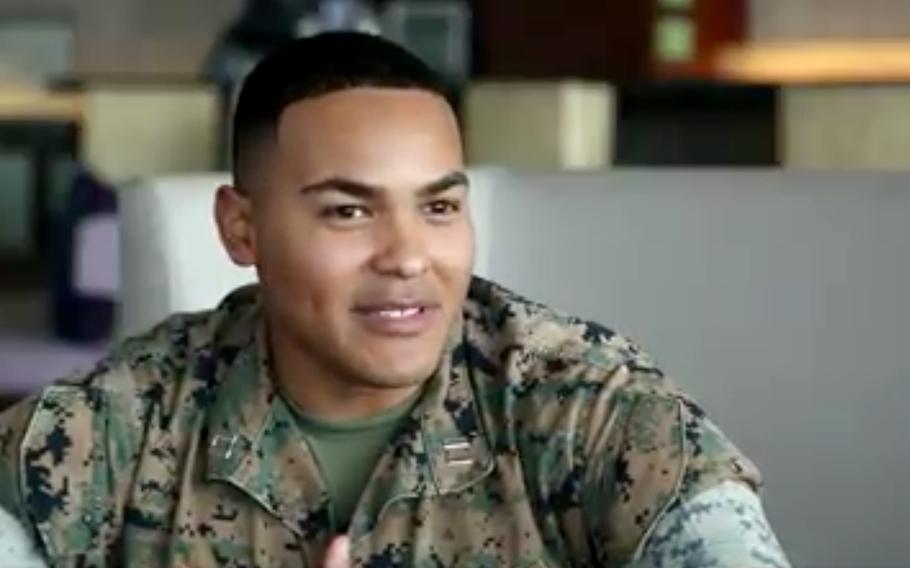 Marine Corps Capt. Vincente Huerta talks about the appreciation of USS Theodore Roosevelt sailors for what the Marines are doing for them on Guam, in a screen shot from a video. (Facebook/CTF 75)

Marine Corps Capt. Vincente Huerta talks about the appreciation of USS Theodore Roosevelt sailors for what the Marines are doing for them on Guam, in a screen shot from a video. (Facebook/CTF 75) This screen shot from a video shows a message from a USS Theodore Roosevelt sailor to the Marines on Guam, showing appreciation for the support the the sailors have received. (Facebook/CTF 75)

USS Theodore Roosevelt sailors on Guam went to their balconies and cheered the Marines supporting them at civilian hotels, where they are in 14-day medical isolation after an outbreak of the coronavirus on the aircraft carrier.

The sailors have also expressed their gratitude in letters and notes for the Marines, said Capt. Vicente Huerta of the 3rd Law Enforcement Battalion, III Marine Expeditionary Force Information Group, in a video posted on the Commander Navy Task Force 75 Facebook page.

“My Marines just started making sure that all of the sailors here receive everything that they need,” Huerta said. “As the sailors started seeing that, we just started getting flooded with a bunch of letters and them showing their appreciation.”

The cheers and applause from the hotel balconies gave Huerta goose bumps, he said.

“Okay, this is a different type of deployment,” he said.

Earlier this month, videos showing hundreds of crew members cheering and applauding the ship’s skipper, Capt. Brett E. Crozier, captured headlines after the Navy fired him over the leak of a memo, in which he urged more rapid evacuation of personnel.

Days later, acting Navy Secretary Thomas Modly traveled to Guam where he briefly visited the ship and criticized Crozier in remarks to the crew, leading to Modly’s resignation when audio of the address also leaked.

As of Thursday, some 4,200 of the ship’s crew members had been moved ashore, and 840 had tested positive for the disease, with 100% of the crew having been tested and only “a small number of results” still pending. Of the infected sailors, 88 had recovered and one, Chief Petty Officer Charles Robert Thacker Jr., 41, had died.

Six were still being treated at Naval Hospital Guam, though none were in intensive care, the Navy said.

The ship has undergone thorough cleaning, but sailors may not be getting out of isolation at the end of the prescribed 14 days, Politico reported Tuesday, citing an internal memo in which Navy officials indicated that the virus may remain active in asymptomatic individuals longer than previously thought.

The memo called a halt to “out-testing” for those in quarantine and holding their release until further evaluation could be completed, Politico reported.

A second video posted on the Task Force 75 Facebook page this week showed service members writing and reading whiteboard messages to the crew to remain “TR strong” and “hold fast.”

For Huerta, the show of gratitude from the isolated crew “has been probably the most gratifying thing I’ve done in the Marine Corps.”