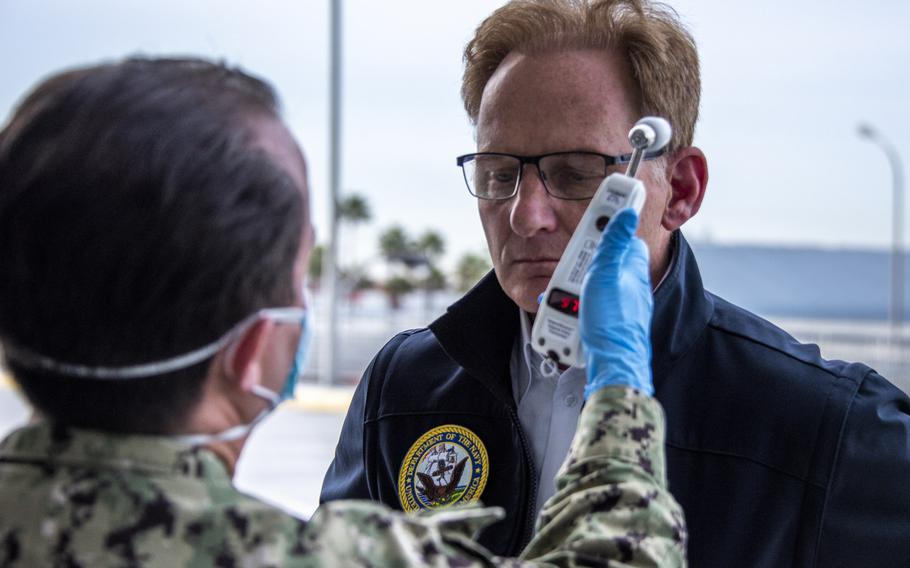 Acting Secretary of the Navy Thomas B. Modly has his temperature read as part of a coronavirus screening in Los Angeles, March 31, 2020. Modly criticized the former captain of the aircraft carrier USS Theodore Roosevelt, Capt. Brett Crozier, over the ship's loudspeakers in a speech to the crew Monday. Modly fired Crozier last week after a memo asking for the evacuation of sailors from the ship was leaked to the San Francisco Chronicle. (Natalie M. Byers/U.S. Navy)

Acting Navy Secretary Thomas Modly justified his firing last week of the USS Theodore Roosevelt’s skipper in a speech broadcast Monday over the ship’s public address system, calling Capt. Brett Crozier “stupid” if he thought a letter calling for his crew to be evacuated because of coronavirus concerns wasn’t going to leak.

Modly’s remarks in Guam came days after the crew cheered Crozier and chanted his name after he left the ship, a scene captured in videos made by sailors that received wide attention.

“If he didn’t think, in my opinion, that this information wasn’t going to get out into the public, in this day and information age that we live in, then he was either A, too naive or too stupid to be a commander of a ship like this,” Modly said over the “1MC,” which broadcasts throughout the aircraft carrier, according to a transcript posted anonymously online. Modly’s spokesperson did not respond to phone calls Monday to confirm its authenticity, but The Wall Street Journal and CNN each said they verified the comments through Navy officials.

“The alternative is that he did this on purpose,” which Modly said would violate military law.

In a statement released Monday by the Pentagon, Modly said he could not verify the accuracy of the transcript, but he defended his remarks to the crew of the Roosevelt.

"The spoken words were from the heart, and meant for them,” he said. “I stand by every word I said, even, regrettably any profanity that may have been used for emphasis. Anyone who has served on a Navy ship would understand. I ask, but don’t expect, that people read them in their entirety."

Roosevelt is now docked in Guam, where more than 1,800 of its roughly 5,000 crew members were being quarantined ashore after more than 150 tested positive for COVID-19.

The skipper’s letter, published by the San Francisco Chronicle last week, has been seen by some as a self-sacrificial move to protect his crew.

It had warned that the outbreak could kill sailors, saying that “if we do not act now, we are failing to properly take care of our most trusted asset — our sailors.”

“Keeping over 4,000 young men and women on board the TR is an unnecessary risk and breaks faith with those Sailors entrusted to our care,” Crozier wrote.

Crozier has since tested positive for the virus and is in quarantine, The New York Times reported Sunday, citing two former Naval Academy classmates.

Modly said the leaked memo exposed a potentially weakened U.S. posture in the Pacific, which has become an arena for the “great power competition” between the U.S. and China, according to the transcript and an audio recording later posted by Task and Purpose.

Modly called it a “betrayal of trust” that led to a “big controversy … about a martyr CO who wasn’t getting the help he needed,” according to the online transcript.

He accused Crozier of doing something “very, very wrong at a moment when we expected him to be the calming force in a turbulent sea.”

Americans expect the U.S. Navy and its sailors to “keep their s--- together and take care of each other,” Modly said, according to the online transcript, likening fear of the virus to experiences in war.

“If the ship was in combat and there were hypersonic missiles coming at it, you’d be pretty f------ scared too,” he was quoted as saying. And later, “T-R has to stand strong as warriors, not weak like victims.”

Modly warned the sailors of the consequences of jumping the chain of command or disobeying it, but also told them never to go to the media, which he said had an agenda of embarrassing the Navy. He promised to “never, ever, ever, ever, ever throw you guys under the bus in Washington or anywhere else in the media.”

Modly also criticized China’s lack of transparency about its own response to the virus, which he said “put the world at risk to protect themselves and to protect their reputations.”

He added that the memo caused concern among Guam residents, who he said were afraid thousands of infected sailors would descend upon their island.

“So think about that when you cheer the man off the ship who exposed you to that,” Modly said. “I understand you love the guy. It’s good that you love him. But you’re not required to love him.”