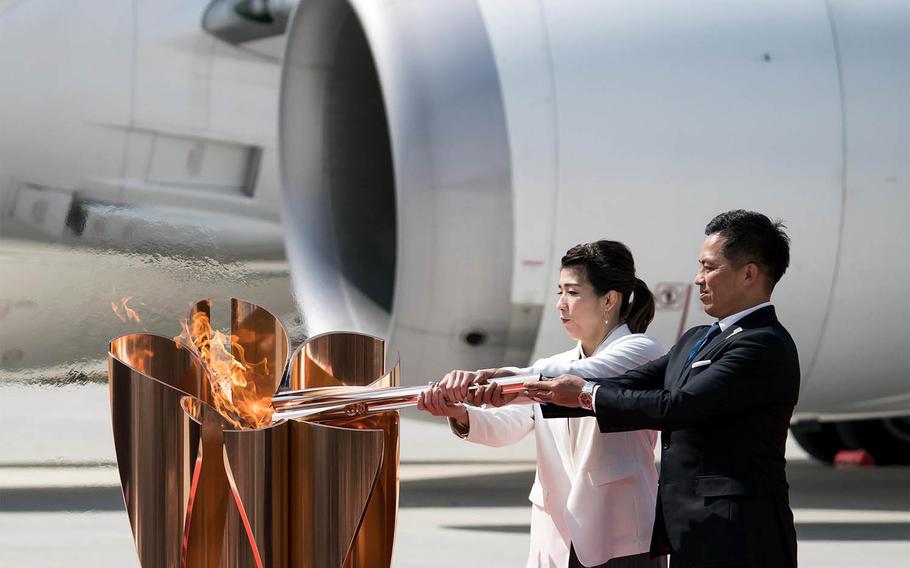 TOKYO – The Olympic torch will pass near several U.S. military installations this spring and summer as it begins its journey Thursday through each of Japan’s 47 prefectures toward one of the most unique Olympic games in recent history.

Thanks again to the coronavirus pandemic, spectators will not be allowed to attend the ceremony in Fukushima, Japan, that kicks off the torch relay. But onlookers may watch from the street as torchbearers run through Japan with the iconic symbol, according to the Tokyo 2020 official website.

The flame arrived from Athens, Greece, aboard a special aircraft shortly before 10 a.m. Friday at the Japan Air Self-Defense Force’s Matsushima Air Base in Miyagi prefecture, according to Olympic.org.

The 121-day torch relay starts at the J-Village National Training Center in Fukushima and will pass closely by several military installations along its zig-zagging route.

The torch is scheduled to pass through Okinawa City on May 1; Sasebo City on May 8; Iwakuni on May 13; Misawa on June 11; Yokosuka and Atsugi on June 29; and Fussa, in western Tokyo, on July 12. The journey will end in Shinjuku, Tokyo, on July 23 for the start of the summer games.

Specific time breakdowns for each location may be found on the Tokyo 2020 website.

The torch relay may be as close as spectators get to an Olympic event in person. The International Olympic Committee announced Saturday that overseas spectators will be barred from the games for the first time in history, due to the ongoing pandemic.

The IOC, during a virtual meeting, also said it will be reevaluating guidelines for Japan resident spectators and plans to have a decision by the end of April, according to a press release posted Saturday to the Tokyo 2020 website.

The IOC and local organizers are asking that torch-relay spectators observe coronavirus safety measures such as wearing masks, keeping distance from one another and refraining from traveling from prefecture to prefecture to see the relay.

The concept for the Tokyo 2020 Olympic Torch Relay across Japan will be “hope lights our way.” Torchbearers will run the flame by famous landmarks and sites that are the favorites of the local population, according to the website.