US to replace security contractor in South Korea 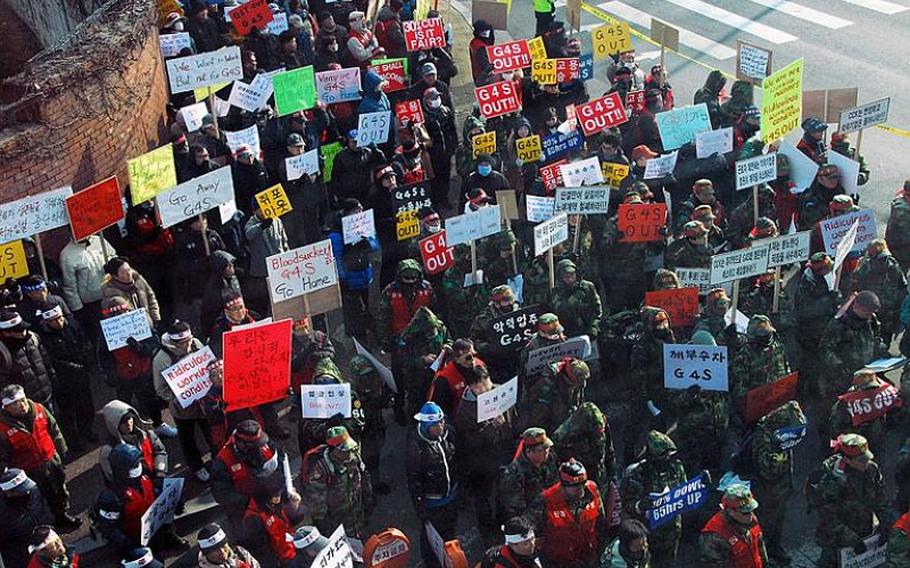 SEOUL &mdash; The beleaguered security company that failed for months to hire enough civilian guards to staff gates at U.S. Forces Korea installations is getting the ax.

British-based G4S is being phased out immediately, with a new security firm scheduled to take over all security operations completely by the end of October, the U.S. Army Installation Management Command Pacific Region said in a statement Friday.

The statement offered little information about the change, including why G4S is being replaced, how new provider C&S Corp. was selected or how much C&S will be paid.

An IMCOM Pacific spokesperson could not be immediately reached for comment in Honolulu, where it was past business hours when the turnover was announced.

&ldquo;C&S Corp. has demonstrated that they could best fulfill the requirements of the new security guard services contract,&rdquo; the statement stated, adding the company has had dozens of contracts at places ranging from South Korea&rsquo;s Jeju International Airport to the Hanawon North Korean Refugee Settlement.

G4S came under fire even before its contract to guard U.S. bases in South Korea took effect last Dec. 1. Most guards who worked for the previous security provider, Joeun Systems Corp., initially refused to work for the new firm, claiming they were being offered longer hours and lower pay. Many demonstrated outside USFK bases for months.

Because G4S didn&rsquo;t have sufficient manpower, the military was forced to close or limit hours at some gates and, until March 23, have soldiers temporarily staff some gates.

G4S took the international spotlight this summer after failing to hire enough guards to fulfill its contract with the London Olympics. The company promised to reimburse the British government for the cost of deploying thousands of military personnel to provide security at the Games.

G4S also promised to reimburse the U.S. government for the cost of having servicemembers man entry gates, though the 8th Army would not say how much the company was expected to pay.

The IMCOM-Pacific statement said C&S has been given a one-year contract that took effect Friday, with two option years. A two-month, phase-in period will allow C&S &ldquo;to acquire the workforce needed to perform the security mission,&rdquo; the statement said, adding that G4S&rsquo; contract will end Oct. 31.

&ldquo;The two-month, phase-in period was designed to allow the two security firms to work collectively to ensure a seamless transition that will be transparent to the community,&rdquo; the release said.

Park Deok Seo, head of a security guard union that has fought for nearly a year to have G4S replaced, said many guards &mdash; including those who eventually agreed to work for G4S &mdash; were happy with the news, but that he will reserve judgment until he meets with C&S officials.

A spokesman for G4S in Seoul could not be reached for comment Friday.