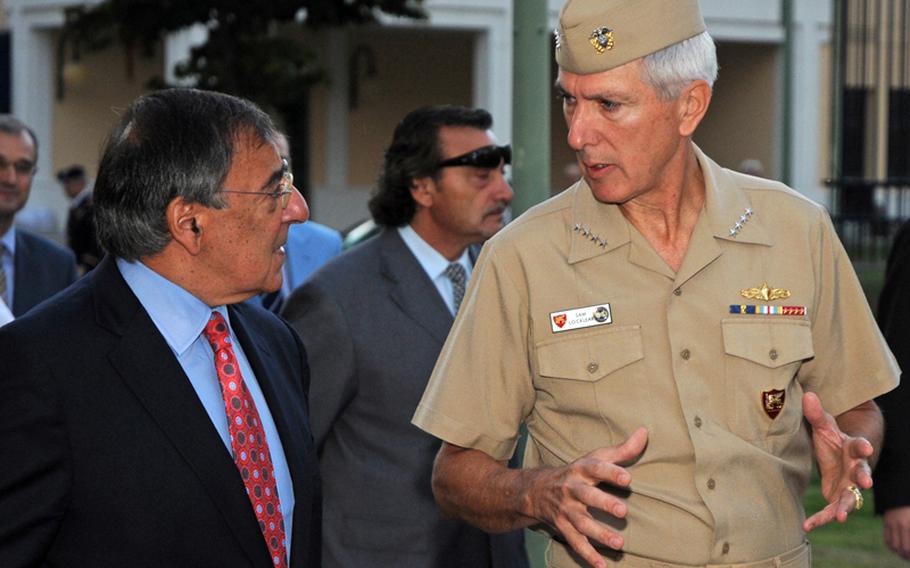 Adm. Samuel Locklear III, right, said April 17, 2012, that the U.S. and its Pacific allies are “monitoring very closely future developments of these types of missiles, commander," referring to last week's failed rocket launch by North Korea. Locklear, who is head of the U.S. Pacific Command, is pictured here with Secretary of Defense Leon Panetta in Naples, Italy, in October, 2011. (Daniel Viramontes/U.S. Navy)

SEOUL &mdash; The new head of the U.S. Pacific Command said Tuesday he did not know why last week&rsquo;s North Korean rocket launch was unsuccessful, but he called the botched attempt a &ldquo;fairly catastrophic failure.&rdquo;

&ldquo;It would certainly cause me to question their competency in advanced missile technology,&rdquo; Adm. Samuel Locklear told reporters at U.S. Army Garrison-Yongsan in Seoul, during his first visit to the region since assuming command on March 9.

A North Korean rocket widely believed to be a test of missile technology exploded shortly after takeoff Friday morning, dampening weekend celebrations of the 100th anniversary of the birth of North Korean founder Kim Il Sung. The North has maintained the launch was meant to send a satellite into space for peaceful observation purposes.

Locklear said he did not know if the missile was real, but the U.S. and its allies were &ldquo;monitoring very closely future developments of these types of missiles, and I can assure you that we will be assessing their capabilities as we move forward.&rdquo;

Locklear also called on North Korea to cease provocations, echoing comments made by other U.S. officials since the North announced plans for the rocket launch in mid-March. In case of future military action from the North, the U.S. and South Korea are considering military options as well as responses &ldquo;in other areas of government power,&rdquo; he said.

The U.N. Security Council on Monday moved to tighten existing sanctions against North Korea, and condemned the launch as a violation of previous U.N. resolutions against the country. The council also warned of further action in the event of future launches or nuclear tests.

&ldquo;The Security Council deplores that such a launch has caused grave security concerns in the region,&rdquo; a presidential statement from the council said.

On Sunday, the North unveiled a new long-range missile during a parade marking Kim Il Sung&rsquo;s birthday. His grandson Kim Jong Un, the country&rsquo;s new leader, said during a 20-minute speech &mdash; his first public address &mdash; that the nation would continue to follow a military-first policy, according to The Associated Press.

The admiral also spoke about planned relocation of U.S. troops on the peninsula.

Locklear said plans to consolidate most U.S. troops in South Korea to bases south of Seoul were progressing according to an agreed-upon timeline with South Korea. The relocation, which will occur gradually as construction on new facilities progresses, has been repeatedly delayed but is now scheduled to occur in 2016.

However, he said the number of command sponsorships for troops in South Korea is not expected to change. U.S. Forces Korea commander Gen. James Thurman said during a congressional hearing last month that the Department of Defense could not afford to expand the tour normalization program, and the number of servicemembers authorized to bring their families to South Korea would remain at 4,645.

The high demand of the program and the cost of expanding infrastructure to accommodate families forced the military to cap the program in 2010.