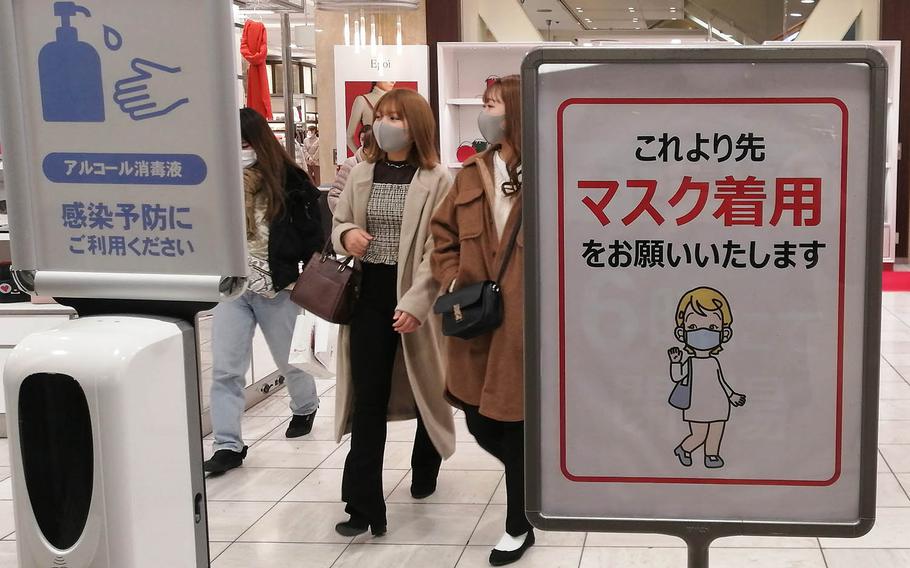 Buy Photo
Signs in the shopping area near Yokohama Station remind passersby of preventive measures against the coronavirus on Dec. 21, 2020. (Akifumi Ishikawa/Stars and Stripes)

TOKYO – The U.S. military in Japan reported 26 new cases of the coronavirus as of 6 p.m. Tuesday, including more than a dozen that appeared over several days at a Navy airfield experiencing its worst outbreak since March.

Base commander Capt. Manning Montagnet said Atsugi is experiencing its highest volume of new cases since the onset of the pandemic, according to a Facebook message he posted Monday.

“As much as we’ve discussed it, COVID-19 fatigue has still intruded into our community,” Montagnet said, referring to the respiratory disease associated with the coronavirus. “I understand the lure of holiday functions and social gatherings. But, let’s be clear, there are existing public health emergency measures that address social gatherings.”

The base was on a temporary summer lockdown under the previous commander, Capt. Lloyd Mack, due to an unspecified number of cases there, but since then counted its new cases in ones and twos until recently.

Meanwhile, Tokyo is still experiencing a relatively high number of new cases daily. The Tokyo Metropolitan Government reported 856 new coronavirus cases on Tuesday, according to public broadcaster NHK. Japan has reported a pandemic total of 223,776 cases, according to NHK.

Yokota Air Base, headquarters in western Tokyo of U.S. Forces Japan, reported three individuals tested positive for the virus, according to a Facebook post.

One tested positive after arriving in Japan from the United States and went immediately into quarantine. The other two are close contacts of a previously identified positive case. Yokota has eight active cases, according to the base.

To the west, Marine Corps Air Station Iwakuni reported six individuals had tested positive within the previous day, according to a Facebook post. But in a departure from previous practice, the air base declined to state how those infections originated.

In a response to a Facebook comment about the level of transparency the base previously displayed, a base spokesperson wrote: “In order to better align with our higher headquarters, prevent speculation, and take pressure off of our medical team, who work their butts off to conduct contact tracing and testing with each positive case, we’re not going to be providing that information publicly in our Facebook updates.”

Air station commander Col. Lance Lewis posted his own message Tuesday, reminding his people that the coronavirus “continues to be an obstacle to resuming life as we once knew it.”

He “humbly” asked the 13,500 base residents to “take any temporary inconvenience in stride with the knowledge that such decisions are never easy but are necessary.”