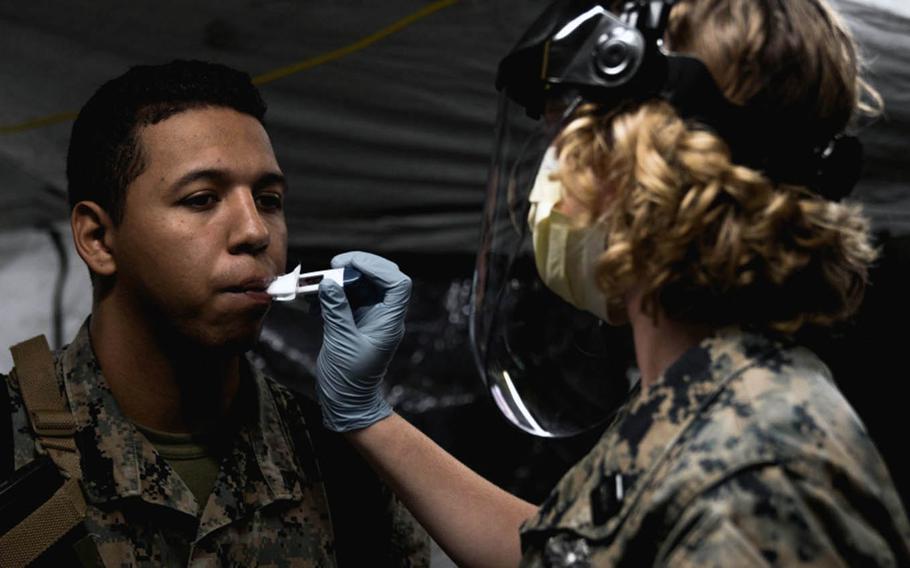 Marines and sailors are screened for the coronavirus at Marine Corps Air Station Cherry Point, N.C., after returning from an exercise overseas on March 24, 2020. (Rachel Young-Porter/U.S. Marine)

TOKYO — The U.S. Marines in Japan confirmed 12 new cases of the coronavirus Friday, 11 on Okinawa and one in western Japan.

The 11 individuals at Camp Schwab in northeastern Okinawa all tested positive Thursday while in quarantine, a spokesman for Marine Corps Installations Pacific, 1st Lt. Timothy Hayes, wrote Friday in an email to Stars and Stripes.

None had contact with anyone outside the camp and pose no risk to the community, he wrote.

In western Japan, one person at Marine Corps Air Station Iwakuni tested positive for the virus in a mandatory test before exiting quarantine, according to a Facebook post by the air station Friday.

The individual was a new arrival to Japan on a military-contracted flight and was still in the 14-day quarantine period required by the government of Japan and U.S. Forces Japan, according to the Facebook post.

On Okinawa, the Marines did not post the new case information on Facebook as it has routinely since July. The Japanese public broadcaster NHK reported those new cases on Thursday.

A spokesman for Marine Corps Installations Pacific, Toshiyuki Nakamoto, on Thursday declined comment to Stars and Stripes on the NHK report.

The U.S. military in Japan typically releases the number of new cases without specifying whether the patients are service members, civilian employees, contractors or family members.

Friday, Hayes said the Marines and their partners plan to regularly provide results of ongoing testing to the community via its social media sites when new cases arise, but they will not post the total number of new cases “for reasons of operational security.”

The Marines on Okinawa experienced some of the most serious outbreaks among the U.S. military in Japan. Hundreds of cases were reported at two bases on the island, Marine Corps Air Station Futenma and Camp Hansen, as clusters erupted there in early July.

Okinawa prefecture on Friday reported 27 new cases of the coronavirus and one death connected to the virus, a prefectural health official told Stars and Stripes by phone. Okinawa has reported 3,305 cases and 61 deaths during the pandemic.

Japan as of Friday has reported 98,321 cases and 1,732 deaths due to the coronavirus during the pandemic, according to the Ministry of Health, Labor and Welfare website.