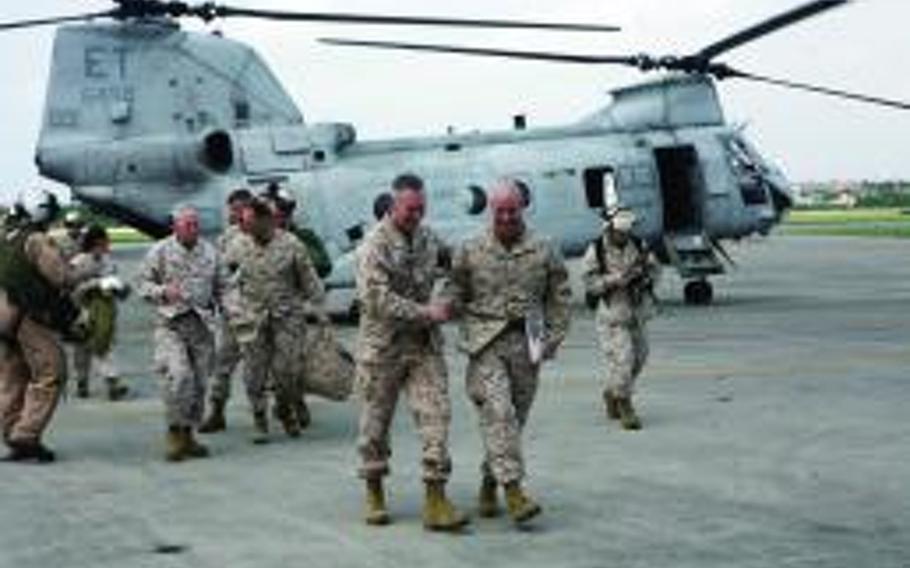 Buy Photo
Marines of the 31st Marine Expeditionary Unit prepare to board the USS Germantown, on Feb. 2, 2012, at U.S. Naval Facility Whte Beach, Okinawa. The Marines were taking part in a patrol of the Asia-Pacific region. Due to concerns raised by the Senate, the U.S. and Japan have delayed unveiling a new agreement on the realignment of military forces in the Pacific. (Matt Orr/Stars and Stripes)

CAMP FOSTER, Okinawa &mdash; The U.S. and Japan have delayed unveiling a new agreement on the realignment of military forces in the Pacific due to concerns raised by the U.S. Senate this week, the Japanese government confirmed.

The two allies were set to announce on Wednesday the planned redeployment of about 8,600 Okinawa Marines to Australia, Guam and Hawaii, but the announcement was canceled after the Senate Armed Services Committee sent a letter to Secretary of Defense Leon Panetta saying the bilateral accord does not appear to consider the full cost of realignment, possible alternatives, or environmental effects, Japan&rsquo;s Chief Cabinet Secretary Osamu Fujimura told a news conference.

The new realignment agreement was hammered out during two months of negotiations aimed at overhauling a stalled 2006 plan to relocate the Okinawa Marines to new bases built with Japan&rsquo;s help on the U.S. territory of Guam.

Fujimura called the delay a &ldquo;matter on the U.S. side&rdquo; and said the two governments still plan to make a joint announcement on a new realignment agreement before Prime Minister Yoshihiko Noda travels to the United States on April 30.

&ldquo;Further adjustment is necessary on the U.S. side,&rdquo; he said.

The letter to Panetta was jointly sent Tuesday by Sen. Jim Webb, D-Va., Sen. Carl Levin, D-Mich., and Sen. John McCain, R-Ariz., who have been prodding the Department of Defense for more details and greater flexibility on its force layout plans in the Pacific for the past year.

The Senate already has frozen spending on the realignment for this year due to questions over costs. The senators have called for the Department of Defense to conduct an independent study on U.S. force layout in the region and any possible alternatives to current plans. They have given the DOD a June deadline.

In their letter, the lawmakers said too many &ldquo;serious questions&rdquo; still remain and that any new realignment proposal should not be considered final until it has the support of Congress.

&ldquo;We require additional information regarding how this proposal relates to the broader strategic concept of operations in the region, the Marine Corps&rsquo; concept of operations, master plans, and alternatives to base realignments on Guam and Okinawa, as well as the positioning of U.S. Air Force units in the Asia-Pacific region,&rdquo; the letter said. &ldquo;We also remain concerned about the absence of firm cost estimates informed by basing plans, an analysis of logistical requirements, and environmental studies related to this new agreement.&rdquo;

Meanwhile, recent fact-finding visits to the Pacific by Webb were met with &ldquo;less-than-forthcoming series of responses from U.S. government officials&rdquo; regarding the realignment plans, the joint letter said.

&ldquo;It is our position that any announcement on this critical matter that goes beyond an agreement in principle at this time would be premature and could have the unintended consequences of creating more difficulties for our important alliance [with Japan],&rdquo; the statement said.