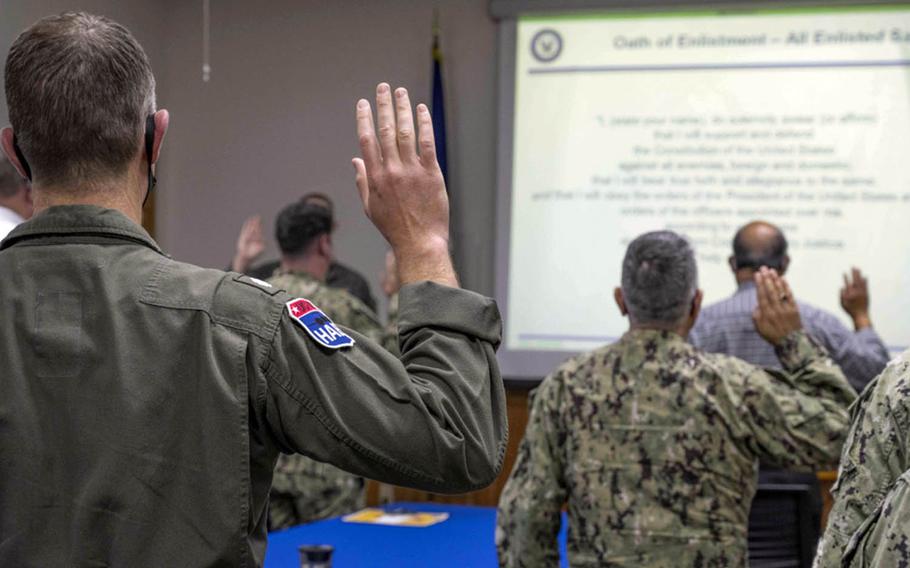 Service members and civilians reaffirm their oaths of office and enlistment during extremism training at Kadena Air Base, Okinawa, March 8, 2021. (David Krigbaum/U.S. Navy)

YOKOTA AIR BASE, Japan — U.S. military authorities at bases in Japan are mostly tight-lipped about what the rank-and-file are saying, if anything, during mandatory training sessions on extremism that must be completed by April 6.

Secretary of Defense Lloyd Austin on Feb. 5 ordered all military installations and Department of Defense offices to take time away from regular duties — a stand-down — to address extremism in the ranks. The Pentagon provided a 13-page “framework” that covers topics to be addressed and a format for the discussions.

The Pentagon defines extremism as advocacy for a supremacist doctrine or ideology that promotes racism, discrimination or depriving people of rights based on their race, creed, color, sex, religion, ethnicity or national origin.

Austin’s order followed the Jan. 6 riot and attack on the Capitol in Washington, D.C., as Congress met to certify the Electoral College results from the 2020 presidential election. The training also coincides with increased violence against Asian-Americans in the United States.

The sessions should include descriptions of impermissible behavior and how to report such behavior, Pentagon press secretary John Kirby told reporters last month. Austin also ordered that service members review and retake their oaths of office and encouraged DOD civilians to do the same.

“He understands that a one-day stand-down across the force isn’t going to solve everything,” Kirby said of Austin’s order. “But it might bring to light concerns and experiences that we were otherwise not aware of.”

It remains unclear if stand-down discussions have brought up any specific concerns at military installations in Japan.

The 374th Airlift Wing at Yokota Air Base in western Tokyo declined to discuss the outcomes of its sessions, or whether all units have completed the training.

“We want each of our units to be able to provide their personnel with the ability to have open discussion and provide feedback without fear of retribution,” wing spokeswoman Kaori Matsukasa said in a March 18 email to Stars and Stripes.

Spokespeople at Kadena Air Base on Okinawa confirmed that extremism training has begun; however, they were unable to get their responses to Stars and Stripes’ queries about the details of those discussions cleared from higher headquarters after several weeks.

Bases that were willing to share more about their training said they are trying to determine how to make the stand-down as productive as possible rather than just a “check the box” event.

“As Americans, we have the right to freedom of speech,” INDOPACOM spokeswoman Tiffani Walker told Stars and Stripes via email March 3. “However, the DoD must balance First Amendment rights with good order and discipline.”

Other bases said it is too early to identify results from the sessions because they are still ongoing.

U.S. Army Japan, headquartered at Camp Zama southwest of central Tokyo, started its trainings unit-by-unit March 8, spokesman Maj. Elias Chelala wrote in an email that day to Stars and Stripes. Commanders there are hoping to improve already existing programs or inform the need for new ones in the future, he said.

“U.S. Army Japan has an existing counter corrosive campaign that already combats racism, sexual harassment and assault, suicide, and domestic violence,” he said. “This stand-down supplements our ongoing commitment to foster an environment free of those influences in this command.”

The Pentagon does not have data on service members’ involvements in extremist organizations, Kirby said at a Feb. 26 press conference. He said the Pentagon hopes to learn from the stand-downs about the scope of extremism in the military.

“Will it lead to specific data? I doubt that,” he said. “I mean, it's not about counting heads in the process of the stand-down but, clearly, it’s about trying to get a better grasp of the degree to which the problem exists.”