U.S. spent $11.7M to fly dependents out of Japan after earthquake 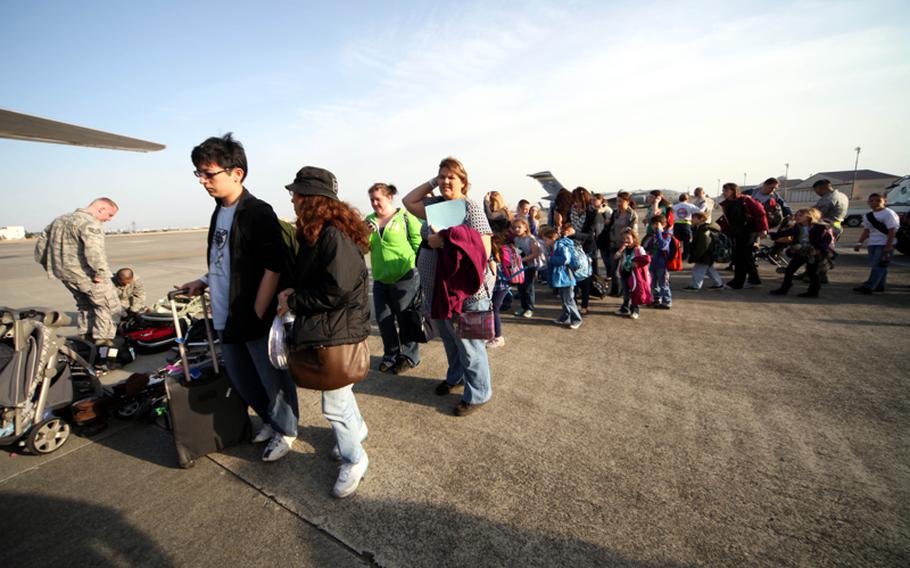 Following the quake and tsunami that hit Japan on March 11, U.S. military family members board a flight from Yokota Air Base, Japan, bound for to Seattle. (Grant Okubo/Stars and Stripes)

That $11.7 million figure covers only military-chartered flights from U.S. bases near Tokyo and in northern Japan. It does not include travel expenses nor per diem paid to the nearly 10,000 dependents who took the military up on its voluntary departure offer and fled to towns and cities across the United States, PACOM said following an information request by Stars and Stripes. Expenses for those who left Japan on commercial airlines also were not included in the figures released Tuesday.

Reimbursements for lodging, meals and other expenses are likely to significantly increase the total cost of the evacuation program. But those additional travel costs are being tallied by the individual services in the region, and therefore, could not be provided by PACOM.

The Defense Department authorized the paid evacuations for spouses and children in mid-March as the tsunami-damaged Fukushima Dai-ichi power plant threatened to go into meltdown and fear of nuclear radiation spread throughout U.S. bases in Japan.

Frightened parents and children packed suitcases and lined up at Yokota Air Base, Misawa Air Base and Naval Air Facility Atsugi for flights to the United States that were hastily chartered by the military. The average cost of the military-chartered flights was about $1,200 for each of the 9,720 dependents who left.

Others who fled took commercial carriers to U.S. territories, the Philippines or other countries, according to data released to Stars and Stripes last month by U.S. Forces Japan.

All the evacuation trips included entitlements such as paid lodging and meals, a daily stipend and a $25 daily family travel allowance.

The total bill for those benefits will depend on where families took shelter and how they spent money.

USFJ data show most evacuees did not opt for a &ldquo;paid vacation&rdquo; to expensive locations such as Hawaii, as some in the Japan military community suspected, but instead traveled to cities with large military populations or the numerous small towns that dot the country.

Only 160 evacuees took shelter in Hawaii and just 61 went to Orlando, Fla., out of the total number of military dependents who fled the disaster, according to USFJ.

The most popular destination was San Diego, where 700 military dependents took shelter.