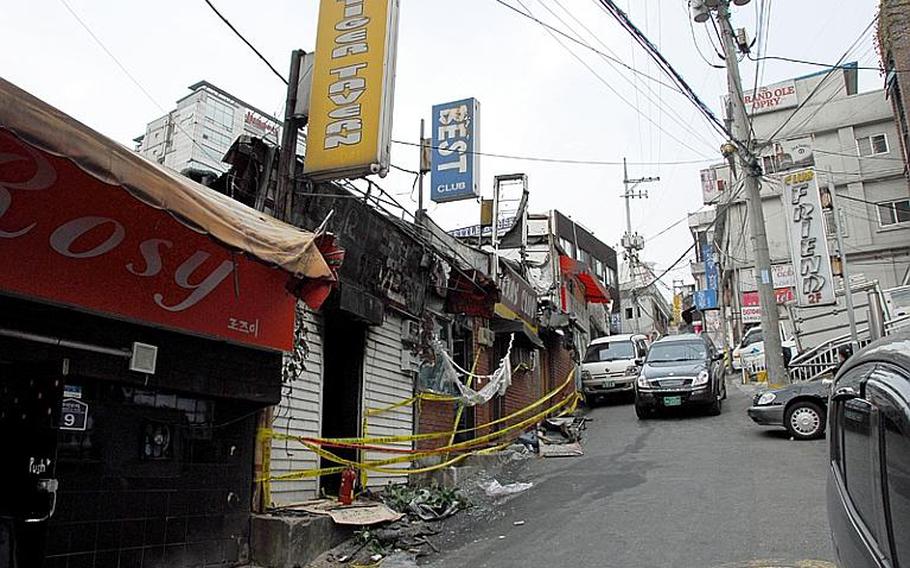 Buy Photo
A U.S. soldier allegedly started a fire on Tuesday morning inside Tiger Tavern, a club on Itaewon's Hooker Hill, that spread to three adjacent businesses, all shown here. The tavern was placed off-limits to U.S. troops in 2003 because of its suspected involvement in prostitution and human trafficking. (Ashley Rowland/Stars and Stripes)

Buy Photo
A U.S. soldier allegedly started a fire on Tuesday morning inside Tiger Tavern, a club on Itaewon's Hooker Hill, that spread to three adjacent businesses, all shown here. The tavern was placed off-limits to U.S. troops in 2003 because of its suspected involvement in prostitution and human trafficking. (Ashley Rowland/Stars and Stripes) 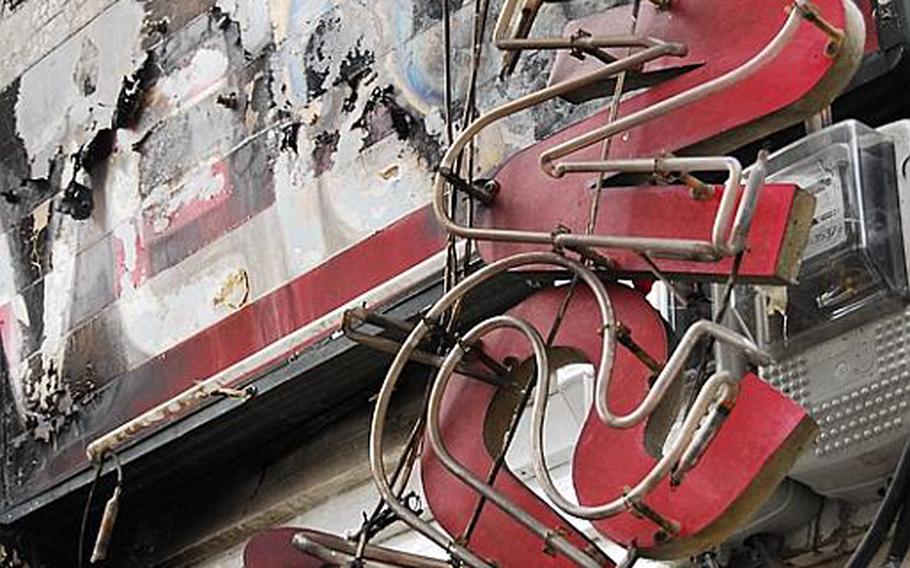 Buy Photo
Part of a burned sign hangs near the entrance of Tiger Tavern, a club in Itaewon's Hooker Hill district. A U.S. soldier allegedly set fire Tuesday to the club, which is off-limits for U.S. military personnel because of its suspected involvment in prostitution and human trafficking. (Ashley Rowland/Stars and Stripes) 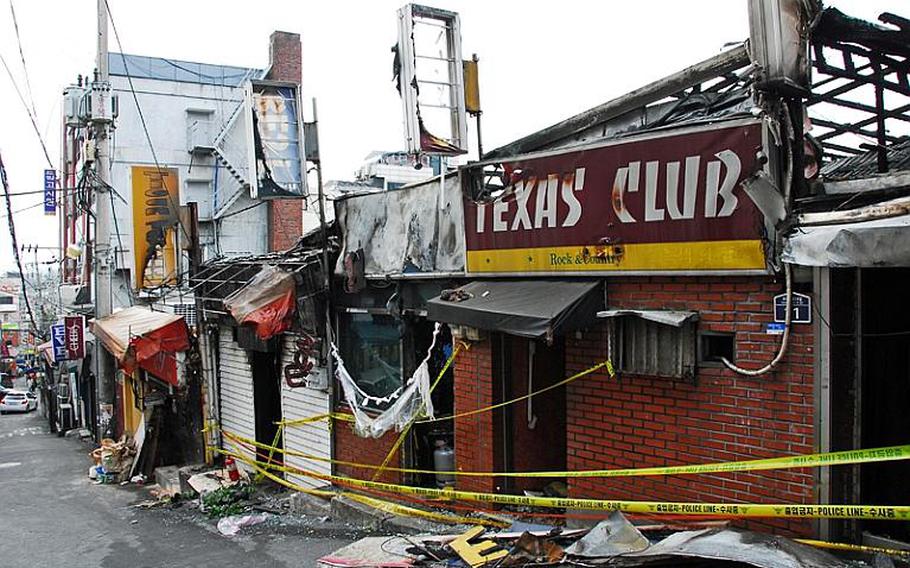 SEOUL &ndash; South Korean police are investigating a fire they say was started by a U.S. Forces Korea soldier early Tuesday morning that caused more than $35,000 worth of damage to three buildings on an Itaewon street, commonly known as &ldquo;Hooker Hill.&rdquo;

A Yongsan Police official said the soldier &mdash; a private stationed in Songnam, south of Seoul &mdash; lit a candle near a cot at the Tiger Tavern around 2:30 a.m. after an argument with the club&rsquo;s owner.

The standing of U.S. forces in South Korea has plummeted recently following two rape cases and perceptions that U.S. servicemembers get special treatment in investigation of crimes, and this latest incident is likely to further fan discontent among South Koreans.

South Koreans say the U.S. military does not do enough to curb troop misbehavior.

In recent months, protesters have been calling for a change to the status of forces agreement, which sets legal procedures for cases involving members of the U.S. military community. Critics say the SOFA keeps South Korean police from adequately investigating crimes because troops remain in U.S. military custody until indictments have been issued, even for serious offenses, including murder. The military, however, must make suspects available to South Korean police for questioning.

The Yongsan police official said USFK officials brought the soldier suspected of setting the Itaewon fire to the Yongsan police station for questioning at 9 p.m. Tuesday and again at 2 p.m. Wednesday.

Eighth Army deputy commander Brig. Gen. David Conboy released a statement Thursday saying the military was aware of the incident and was fully cooperating with the South Korean police investigation.

&ldquo;The overwhelming majority of our soldiers conduct themselves with dignity and show deep respect for our Korean hosts,&rdquo; the statement said. &ldquo;This is the expectation for every soldier, on and off duty, as we serve side-by-side with our Korean counterparts in support of the alliance.&rdquo;

In the hours after the fire, Yongsan police took photos of approximately 20 foreigners in Itaewon. From those photos, the tavern&rsquo;s owner identified the soldier as the man with whom she had argued, police said. Police did not say what started the argument.

Closed-circuit television footage from the area outside the club also showed a man believed to be the soldier leaving the area after the fire began, the police official said.

During questioning, the soldier said he had been drinking, the police official said. The soldier told police that he left a room at the tavern to go to the restroom. When he returned to the room, there was a fire, he told police.

The Tiger Tavern was declared off-limits to U.S. servicemembers on March 12, 2003, because of prostitution and human trafficking, according to the USFK website. Yongsan police said Thursday they did not know if Tiger Tavern was a brothel.

The soldier was also in violation of a nighttime curfew &ndash; in place from midnight to 5 a.m. on weekdays &ndash; enacted by USFK commander Gen. James Thurman in October following the two rape cases.

Last month, Pvt. Kevin Lee Flippin, was sentenced to 10 years in prison for the brutal rape of an 18-year-old South Korean in Dongducheon. A second soldier is being investigated for raping a South Korean woman in Seoul after a night of drinking together, but has not been charged. That soldier claims the two had consensual sex.

Eighth Army spokesman Lt. Col. Andrew Mutter said Thursday he would not release personal details about the soldier, including his rank and the base where he is stationed, while the soldier is under investigation. He said the soldier is on international hold, meaning he cannot leave the country, and is restricted to his post and is under escort 24 hours a day.

He said the military was notified about the investigation early Tuesday morning and is cooperating fully with the South Korean police.